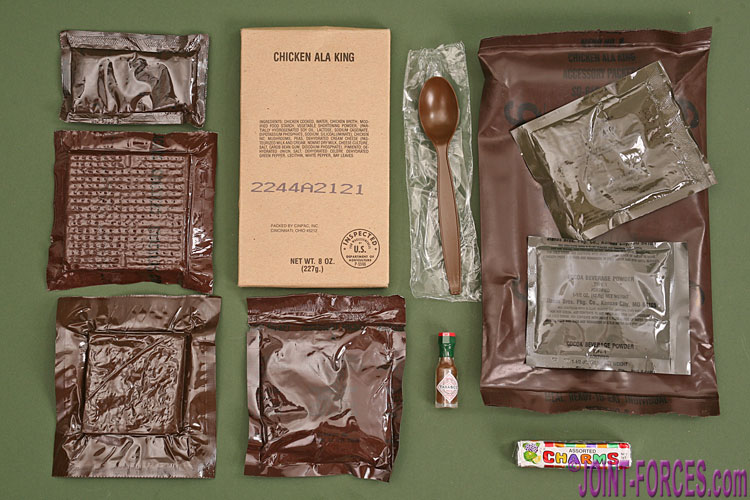 Over the next few articles in this series we plan to look at the US Army Meal Ready to Eat or MRE from the late 1980s to date, writes Bob Morrison.

It is probably fair to say that I am a bit of a magpie, collecting interesting things and seldom intentionally throwing them away, so it is unsurprising that I can still find reference images from many years ago of ration packs which I collected and usually also sampled. The MRE photos here were taken almost a decade ago, in January 2009 to be precise and for a feature in the March 2009 issue of the now defunct and sadly missed COMBAT & SURVIVAL Magazine, though the ration packs themselves were considerably older.

In that now out of print magazine article I explained that the MRE, produced literally in millions and on issue since 1981 was, and still is, the standard field ration for US military forces. Each MRE pouch is intended to supply one complete meal, totalling around 1200 calories and, unlike in many armies where a ration pack is intended to last 24 hours, three individual pouches are issued per soldier per day.

The US Meal Ready to Eat replaced the US Meal Combat Individual (MCI) which was issued from the 1950s to the end of the 1970s. During the 1990/1 campaign to liberate Kuwait, the MRE was the standard ration issued to all US and some Coalition forces and it was around this time that it picked up the nickname Meal Rejected by Ethiopians based on its unpopularity with the troops; the Ethiopian reference being military black humour relating to the 1985 famine.

For many years the MRE was not particularly popular with the average GI, probably because the mail meals were not only heavily processed and quite bland, but were specifically intended to be eaten either hot or cold and indeed I have heard them referred to many times as ‘baby food for adults’. Originally they were intended to be consumed for no more than ten days at a time – though more recently that has been stretched to 21 days thanks to the introduction of more menu variety and dietary improvements – as it was originally assumed that after ten days the logistic chain would have swung into operation to provide fresh food and cooked meals to deployed personnel.

During Operation DESERT SHIELD, the build-up to the 1991 Operation DESERT SWORD venture into Kuwait, many forward units found themselves surviving on MREs for over a month, and in some cases even two to three months. Just before the air campaign, Operation DESERT STORM, commenced I was actually offered an American aluminium folding camp cot in exchange for two British Operational Ration Packs, as not only were the guys offering the swap fed up with their own grub but they envied the highly regarded British equivalent. Of course no doubt Brits condemned to eating their own ration packs day in and day out felt likewise, though based on the poor reputation the MRE had at that time I doubt that many would have traded on a like for like basis.

There are two things that must always be remembered when it comes to sustenance in the field: never eat yellow snow and never eat brown MREs. The first one is pretty self-explanatory, but the second needs a little in the way of explanation as even though the bag colour changed in the 1990s it is still occasionally possible to find MREs in brown bags being sold at military fairs and through survivalist web stores. For many years the only way of easily dating the age of an MRE was to check the date stamped on the cardboard carton that they were bulk delivered in. Once the individual plastic meal pouches were taken out of the carton it was impossible to tell how old that particular ration was and many an unscrupulous surplus trader has flogged off meals that were several years past their official three year shelf life, safe in the knowledge that not only were there no external date checks but even when the outer pouches were opened the code numbering system was not easy to work out.

The two brown MRE pouches featured here date from 1987 and 1992, though the latter was actually bought from a surplus dealer selling them as suitable for ‘expedition’ or ‘survival’ use in 2003. Funnily enough, bulk packs were being offered in plain cardboard cartons rather than the ones they were issued in, though as MREs are US Government property and not intended for resale traders should theoretically not be dealing in them as bulk supplies.

Of all the main courses, of which originally there were twelve options during the first fifteen years of MRE production, the brown bag years, I grew to quite like the Chicken Á La King option. From 1981 through to 1987 this was in the Menu 9 pouch, and inspection of the example pictured here carries the code number 7010A on the meal bag, which I deciphered as meaning it was manufactured on the tenth day of the seventh year; this meant it would actually have gone out of date before even the initial August 1990 deployment of US troops to Saudi Arabia on Op DESERT SHIELD.

Each production year the MRE menu list is allocated a Roman numeral, starting with I for 1981 with 2018 being XXXVIII. For the first seven years the menu list was virtually unchanged, but from 1988 through to phasing out of the brown pouch in 1995 (XV) there were minor tweaks most years. As my second Chicken Ala King (note the slight spelling change) meal came as Menu 6, it must have been produced between 1988 and 1992 (VIII and XII). Inspection of the meal bag, which was now in a beige cardboard outer rather than dark green, revealed the date code 2244, which by my reckoning puts production date as the 244th day of the 1992 production year. That would make it too young to have been produced for Op DESERT SHIELD / STORM though US troops serving in Somalia in 1993 (the Blackhawk Down era) would have eaten this one.

As both my 1987 and 1992 ‘brown bag’ MREs are essentially similar, I have concentrated on the earlier one (No.9) but mention the differences in passing. Each came in a simple tough brown plastic sleeve pouch, heat-sealed at each end and measuring approximately 13×7 inches (330x180mm) when flattened. The basic constituent items were a main course, a dessert, a powdered drink, crackers (biscuits) and a spread, plus an accessory pack and a plastic spoon.

The No.9 main meal, Chicken Á La King, was a thermo-stabilised thick paste in an 8oz (226g) green foil pouch measuring 8×4.5 inches contained in a green (later this changed to a more natural colour) cardboard carton that was just slightly larger and measured a little over half an inch (15mm) in thickness. A natural colour cardboard stand to hold the pouch was also included. Of the twelve main meal menus from this period, all but the Pork Pattie and Beef Pattie options, which were Freeze Dried and came with Apple Sauce and Beans respectively, were thermo-stabilised to ensure long life and consistency, irrespective of whether stored in extreme cold or extreme hot operational conditions.

The Menu 9 second course was a block of fruit cake, in this case Orange Nut Cake, which came in a similar but smaller green foil pouch with cardboard outer carton. The alternatives to the cake in other menu numbers were either Freeze Dried fruit, chocolate covered cookies or chocolate covered brownies. Our 1992 MRE had the FD Fruit option, which was a nougat-like block that could either be eaten dry or reconstituted in water.

All twelve menus contained a brown foil pack of two standard four inch square US military issue crackers (biscuits) accompanied by either cheese spread, jelly (jam) or peanut butter. Menu 9 had the processed cheese option, also in a green foil pouch, which was not dissimilar to the old British ‘cheese possessed’ concoction; our 1992 MRE had peanut butter instead. Six of the menus also contained a green foil pouch or sachet of Cocoa Beverage Powder to which six fluid ounces of water had to be added; it could be drunk either hot or cold, but you have to be a bit desperate to opt for the latter. By 1992, a cold beverage base powder sachet (in our case grape) had been added.

The accessory pack came in five different variants – A to E – with mostly common contents but three also contained commercial brand candy (sweets) plus two had ketchup and one had gravy to accompany specific main meal options. The standard components were; sachet of instant coffee, sachet of non-dairy cream substitute, sachet of sugar, sachet of iodised salt, pack of two pieces of chewing gum, a book of safety matches, and a wrap of toilet tissue sheets. As previously mentioned, there would also have been a large spoon in this pack, but I took that out to use it when I first opened the pack and I used the matches too.

In the ‘brown bag’ MRE days main meals were simply heated up by immersion in boiling water, but in due course the Flameless Ration Heater was introduced. I will cover that and the more recent ‘tan bag’ MRE in the next feature. Clockwise from top left: Opened 1992 Accessory Pack A and contents; 1987 Orange Nut Cake still looked and smelled okay after 20 years; 1992 dried fruit was a nougat-like block which could be eaten dry or reconstituted with water; Standard issue American crackers (biscuits) were packed in pairs in brown foil [©BM]