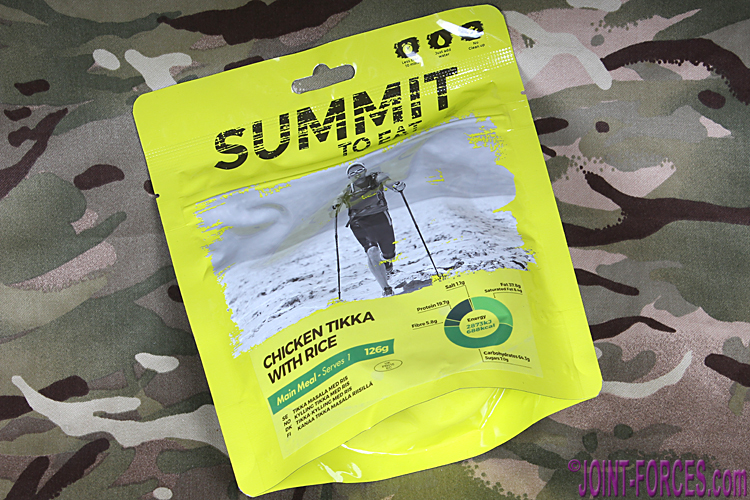 Summit To Eat is a comparatively new range of freeze-dried meals, produced by a military ration component supplier, which is aimed at both outdoor enthusiasts and festival goers, writes Bob Morrison.

I spotted the Lancashire wing of European Freeze Dry and their Summit To Eat (say it with a Lancastrian accent) stand at the Outdoor Trades Show earlier this week and, although offered some free samples of their veggie meals, I decided to try to ‘prof’ a pouch of their Chicken Tikka With Rice. Thursday is usually my weekly Curry Night and I already had some samosas waiting in the fridge, so this seemed a good excuse to try out the only Indian main course in the Preston company’s range.

Now I must confess that I much prefer retort pouch rations to freeze dried, not least because the former can usually be eaten cold with little or no preparation if required whereas the latter need boiling water and several minutes sitting time to reconstitute, but there are several good reasons for carrying the powdered ration components if you are certain of having sufficient clean water. Low weight for high calorific value is the major advantage of freeze-dried and extended shelf life, often seven years or more compared to two or maybe three, is a second serious consideration if planning long term; European Freeze Dried also produce bulk catering packs for disaster relief organisations and preppers / survivalists.

Tipping the scales at around 145 grammes (126g net weight) the Chicken Tikka With Rice main meal pouch provides 688kcal (2873kJ) of energy once reconstituted with 350ml of boiling water. After tearing off the top strip and removing the Oxygen Absorber sachet just add the water to the level of the line marked inside, stir the contents with your racing spoon, reseal the top, then leave to stand for eight minutes.

To ensure I got it right I actually checked the amount of water in a measuring jug before pouring and I confirmed that it was up to the Line A before stirring and sealing, as there is nothing I hate more than getting to the bottom of a freeze-dried meal pouch only to find the last couple of spoonfuls scraped from the corners contain gritty powder. No worries on this score with Summit To Eat, and indeed if anything it looked like I could have got away with adding less water as when decanted into a bowl for photography the chicken tikka looked a bit watery.

On the taste front, however, I had no complaints whatsoever and the curry even had a nice bit of bite without being overly fiery (not that I object in the least to a fiery curry, but meals like this have to be tailored to less hardy tastebuds than mine). The rice was also reasonably firm, which is not always the case with some freeze-dried brands. Verdict? I enjoyed it.

At present the Summit To Eat range consists of two Breakfast pouches, eight Main Meals, and three Dessert pouches with seven of the packs being vegetarian. They also market two Festival Kits, one of which is Veggie, containing two Breakfast and two Main Meal pouches, and a ten-pouch carton for families etc. Look out for the high visibility lemon/lime packaging in your local outdoor supplies stockists. Mains have a RRP of £5.50 and Breakfasts / Desserts are priced at £4.50 each. Chicken Tikka, Featured, Freeze-dried, Preppers, Rations, Summit To Eat
You may also like