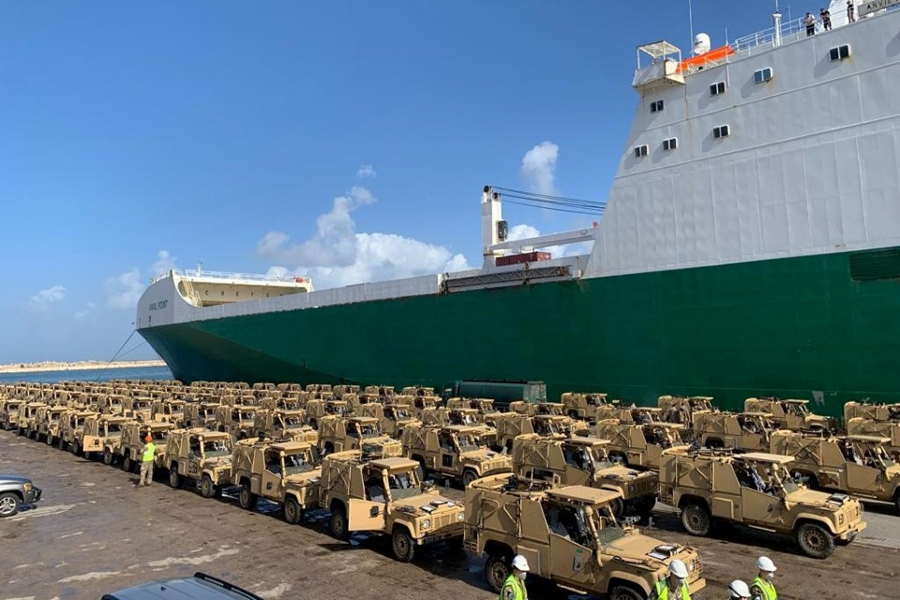 UK MoD News Release, 12 February 2021: The UK has donated 100 Armoured Patrol Vehicles to the Lebanese Armed Forces (LAF) to tackle the threat from terrorism on its border with Syria, which is frequently used by violent extremists and smugglers.

The Revised [sic] Weapons Mounted Installation Kit (RWMIK) Land Rovers, which are capable of tackling the rugged Syrian border terrain and can be mounted with heavy weapons, have been given to the LAF’s Land Border Regiments (LBRs) that patrol the area. This allows them to keep closer watch over their borders and stop extremists trying to enter Lebanon, who could otherwise then attempt to travel on to Europe.

The Lebanese border is also used by international arms and drugs smugglers, with the illicit substances and arms then transited through the country and onto other parts of the world. Supporting the LAF and promoting security and stability in the region during a time of economic crisis is also crucial to reinforcing the LAF’s ability to defend the state of Lebanon from a range of threats.

Minister for the Armed Forces James Heappey said: “This fantastic border project marks the next chapter of the longstanding relationship between the British Armed Forces and our Lebanese counterparts.

“The donation of these vehicles demonstrates the UK’s commitment to security and stability in the region. A stable border between Lebanon and Syria is firmly in the UK’s national interest.

“We share a common enemy in Da’esh. The UK will continue to work closely with our partners in the region to stamp out the threat posed by terrorist groups.”

The RWMIKs are being taken out of service by the British Military this year after a long and successful period on UK operations around the globe, including in Iraq and Afghanistan. Following a request from General Aoun, the Commander in Chief of the LAF, to help bolster border security, the vehicles left the UK on 18 January and arrived safely in Lebanon on 31 January. The total value of the vehicles is £1.5million.

A small specialist team from 16 Air Assault Brigade deployed to meet the vehicles on arrival in Beirut and have delivered an initial round of vehicle training to the LAF. This training will continue in the spring to ensure the LAF can get the very best tactical and operational effect from them. The Conflict Security and Stability fund is also providing £300,000 for spare parts for the vehicles.

Minister for the Middle East and North Africa James Cleverly said: “Keeping Lebanon’s land border secure is key in our shared fight against Da’esh in the Middle East. On my recent trip to Lebanon, I saw for myself the excellent work the UK and Lebanese Army is doing together, to keep Lebanon stable and secure at a time of turmoil in the country.

“These patrol vehicles, donated by the UK, will help strengthen the border with Syria against weapons smugglers and terrorist groups, and ultimately protect both of our countries’ national security.”

The donation builds on significant support already provided to Lebanon by the UK, including the construction of 79 border towers, provision of 350 vehicles, and training over 23,000 LAF personnel. Following the devastating Beirut explosion in August 2020, the UK also provided £27 million in humanitarian assistance and deployed HMS Enterprise to assist at the port – the first foreign ship to arrive in support of the Lebanese people.

In recent years Lebanon has become an increasingly important counter-terrorism partner for the UK. The UK’s support to the LAF – who drove Da’esh out of Lebanese territory in 2017- is an important part of the UK’s contribution to Counter-Da’esh efforts in Iraq and Syria.