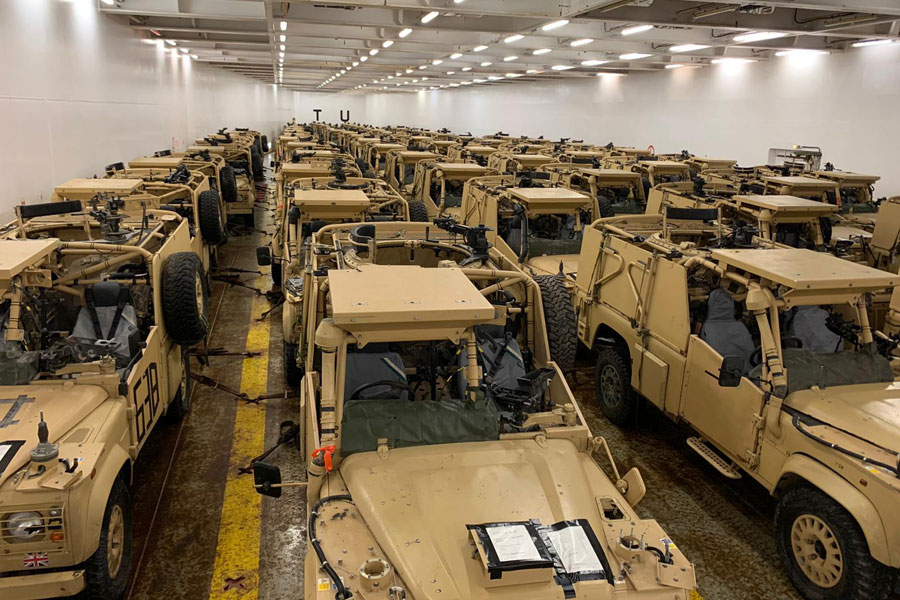 The British Embassy in Beirut has announced via Twitter that 100 R-WMIK Land Rovers have departed Southern England for Lebanon.

From the short video clip and images uploaded to the official British Embassy social media account it is apparent that these vehicles are R-WMIK+ variants, complete with supplementary armour package and gun mounts and their transporter is one of the MoD Point-class sealift ships.

The embassy tweet on Monday 18th , auto-translated from Arabic, states: “Today a ship sails from the south coast of the United Kingdom bound for Lebanon with a hundred armoured patrol vehicles (Land Rover RWMIK), a gift from the British government to the Lebanese Army. This donation will enhance the role of the land border regiments and contribute to stability on the Lebanese borders.”

Lt. Gen. Sir John Lorimer, UK Defence Senior Advisor to the Middle East, tweeted, auto-translated from Arabic: “I am pleased to officially approve this project. These vehicles will greatly assist the Lebanese Army in protecting the borders by enhancing its ability to send patrols over a longer distance in rugged mountainous terrain. This is an indication of commitment towards the people of Lebanon and its partnership with Lebanese Army in border security and combat.”