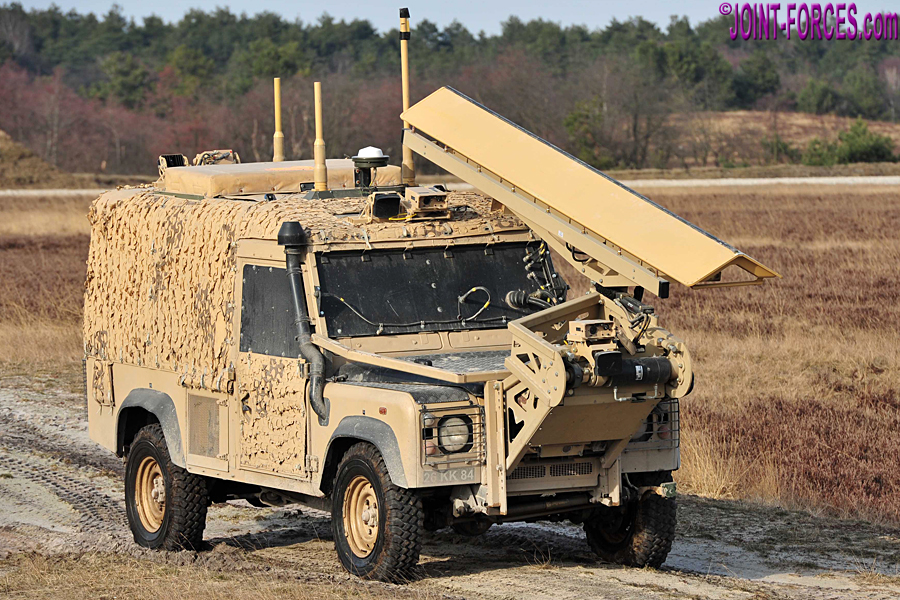 At the height of British military operations in Afghanistan’s war-torn Helmand Province in the second half of the first decade of the 21st Century the primary threat to soldiers’ lives was the buried IED (Improvised Explosive Device) and its close cousin the landmine; at one stage in Operation HERRICK the UK Armed Forces casualty rate for killed or seriously injured personnel was averaging around one a day.

As a result of this horrendous toll, in addition to procuring more heavily armoured Protected Patrol Vehicles the British Army also introduced the TALISMAN route clearance packet of specialist detection and disposal vehicles designed specifically to locate IED threats before they could take lives. From 2011 onwards the Land Rover Defender-based PANAMA UGV or ROV (Unmanned Ground Vehicle or Remotely Operated Vehicle) which was procured under the UOR (Urgent Operational Requirement) process was often at the head of the crucial convoy of detection vehicles which regularly swept the major communications routes in Southern Afghanistan to identify and neutralise potential explosive threats.

Originally classified as secret, not of course that this stopped ‘Terry’ Taliban snapping pictures of it doing the business out in Helmand, the PANAMA Land Rover has since had its security clearance status downgraded. However some of its sensors and systems are still highly classified and discussing them could potentially cost lives on future deployments so I am therefore not going to risk OpSec by discussing these aspects and I am only looking at the vehicle and its basic role.

Carl’s PANAMA photos with its systems stowed, captured in Helmand and Germany, were taken with the permission of his ‘media minders’ at the time. My accompanying photographs taken during SHAMAL STORM 16 with sensors deployed were snapped with either a Royal Engineers or a Royal Military Police officer ‘minder’ standing alongside me but out of shot. The two DSEI shots are of a MIRA (Motor Industry Research Association) prototype produced in conjunction with PA Consulting Group, photographed when the then in-service system was displayed to the defence industry at the September 2011 defence expo and before it was Classified.

Ten years ago, in the summer of 2011, reports surfaced that the UK MoD had found an alternative use for a batch of redundant CAV 100 ‘Snatch’ Defenders and they had ordered their conversion into Unmanned Ground Vehicles; i.e. remote-controlled light armoured systems. In effect, these UGVs would carry sensors for detecting buried explosive devices and would patrol ahead of a Royal Engineers ordnance detection and disposal team, travelling in a convoy of highly protected vehicles, who would scan for threats while their detection equipment was transported up-front in and on a sacrificial driver-less Land Rover. Shortly afterwards, just before DSEI 2011, Carl was allowed to take some external-only record photographs of an in-service PANAMA out in Helmand.

The now surplus to requirements Project CHILE fleet of Land Rovers, upgraded for desert operations and retrofitted with an automatic gearbox and diesel engine (the original version had a petrol V8 and manual box), was deemed ideal for conversion as its light armoured body offered a secure housing for valuable electronics and there was sufficient available payload to fit the lightweight Ground Penetrating Radar (GPR) boom and other sensors; it was also easy to maintain with good spares availability. Without going into too much detail, the GPR works pretty much like the contraption used in Tony Robinson’s Time Team television series on archaeological exploration, but it is tailored to detect specific potential threats and is much more focussed.

When operated as part of a Royal Engineers TALISMAN route clearance packet, the PANAMA UGV was towed behind a specialist Protected Patrol Vehicle, usually the Buffalo MRAP known as RUMMAGE in Royal Engineer service, until it reached the operational area. At this stage it was untethered, it was moved forward to the head of the convoy, and its sensors were deployed. The UGV operators, including a ROV driver and specialist technicians who monitored what was detected on and under the ground ahead of the convoy, travelled inside a specialist ‘Protected Eyes’ MASTIFF PPV variant where they were safe from bullet and bomb as their Land Rover patrolled ahead.

The ROV driver controlled the Land Rover with a ruggedised video display screen plus a very simple panel on which two thumb joysticks controlled acceleration and braking plus a number of on/off switches controlling various functions of vehicle and the sensors. According to both the officer who briefed us on the system and the driver of vehicle 28KK04, the controls are intuitive and anyone familiar with a Playstation can speedily learn how to drive the ROV / UGV.

The 28KK** series registration shows the Land Rover started life around February 1993 as one of the original V8-powered Courtaulds (now NP Aerospace) CAV-100 composite armour bodied Land Rovers designed for Internal Security duties on the streets of Northern Ireland. Before long some of this batch were sidetracked out to the Former Yugoslavia to fill a need for light protected transport, and indeed I travelled in a couple of these when I was in Bosnia; including, coincidentally, in the front seat on one epic journey over the mountain road back into Croatia with award-winning Army photographer Sgt Steve Dock (see second photo on this page) at the wheel. Later, later many of these light armoured vehicles were re-engined and given air-conditioning for service first in Iraq and then in Afghanistan.

According to Royal Engineer users I have spoken to, the PANAMA UGV adequately fulfilled its role and they liked it. However, there were occasionally problems with the gearbox, which is unsurprising as that particular engine and gearbox combination was not designed for either the weight distribution of the ROV / UGV configuration or protracted low speed operation in the specific conditions frequently encountered on desert operations, but as the system was brought into service in ultra-fast time to meet a specific Urgent Operational Requirement the general consensus seemed to be that had done a very good job bearing in mind the constraints it had to operate under.

In April 2012, following an industry awards ceremony, it was stated: “The unmanned PANAMA keeps the crew out of harm’s way and is saving the lives of UK forces in Afghanistan. A route can now be searched for IEDs at least ten times faster. PANAMA took just eleven months to move from investment decision to operational use…”.

When the boffins at the Motor Industry Research Association partnered their MIRA Autonomous Control Equipment (MACE) with a redundant SNATCH Land Rover they created what was almost certainly the world’s first successful mission-capable modern military Unmanned Ground Vehicle. It is unknown how many lives the small fleet of PANAMA UGVs saved in Afghanistan but a great many soldiers and Explosive Ordnance Disposal operators who survived the perils of Helmand Province tours no doubt have good reason to thank this truly unique version of a much-maligned Land Rover variant.