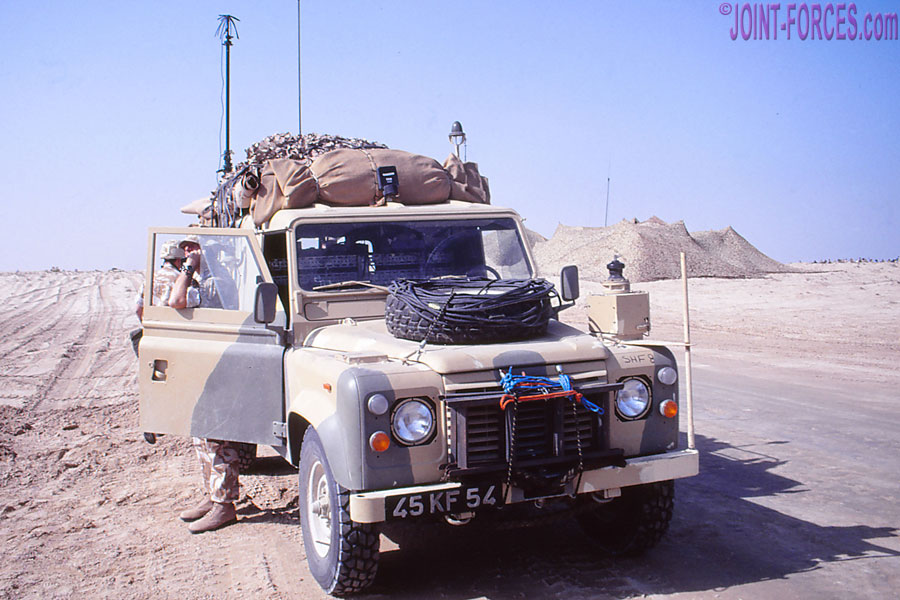 Thirty years ago this week, hundreds of British Forces Land Rovers of all types were deployed in Saudi Arabia on the eve of war with Iraq, writes Bob Morrison.

Before I go any further with this article, I think it is important to stress that (with the exception of two) I took the accompanying Land Rover photos in this article in the ten days just prior to the outbreak of the Coalition war with Iraq on the night of 16/17th January 1991.

Although I would have liked to have stayed in Saudi Arabia a little longer, as I was still in full-time employment in the structural engineering field I could not have hung around until the Land War commenced almost six weeks later, so I flew out on the last available civvy flight from Dhahran to Riyadh before the balloon went up and from there staged on to Heathrow. Unlike on my inbound journey there were no longer any direct flights possible as all airspace north of Dhahran was about to become Restricted for civilian aircraft; if ever there was a clue for Saddam Hussein that the UN-backed Coalition was deadly serious about the 15th January withdrawal deadline, that should have been it. In addition to the imminent civvy flight cancellations prompting me to head home, as UK MoD in London had handed over allocation of the comparatively few available embedded media slots to the Press Association for them to sort out, there was simply no room on the minibus for a part-time specialist snapping scribbler like me. Now back to the Land Rovers…

Starting with the above One-Ten soft top nicknamed KILCAR, which is possibly my most famous photo from this period as Land Rover’s Government & Military Operations team used it for a post-conflict full page advertising campaign in newspapers and magazines in the UK, the US and the Middle East highlighting the massive contribution that the marque made to the war effort. This tinker’s caravan of a One-Ten was a Queen’s Royal Irish Hussars REME LAD (Royal Electrical and Mechanical Engineers Light Aid Detachment) vehicle crewed by ASM Collins and Sgt Brazier. The bumper-mounted recovery winch and GPMG (General Purpose Machine Gun) mount were highly unusual modifications and the unusual Stone and thinned RAF Pink camouflage was applied by its crew in-theatre. I spotted KILCAR, which was constantly on the move throughout the 7th Armoured Brigade sector, on several occasions.

The Military Police Defender, nicknamed LADY KATE by its crew, was being used by NCOs from 203 Provost Company RMP and was a companion to SNAFU (see MLR45). A typical 1985/6 Fiscal Year long wheelbase hard top, it had recently returned from maintenance at 7th Armoured Brigade’s Main Repair Group and Sgt Andy Bridges’ team were just about to refit the spare wheel and improvised route marker stowage bins which they had taken off to prevent another unit ‘borrowing’ them. Like most One-Ten hard tops deployed on Operation GRANBY it was an FFR (Fitted For Radio) version.

It didn’t take long for switched-on troops to start adding extras, such as sand ladders (sections of Pierced Steel Planking) and additional stowage bins and baskets to their Land Rovers once they deployed ‘into the sandpit’. This 7th Armoured Brigade hard top One-Ten – note red jerboa insignia of the WWII ‘Desert Rats’ on the front door – not only has PSP and a rooftop stowage bin, but various pieces of tarpaulin were carried on / attached to it to help speedily break up its distinctive outline when stationary out in the desert. Note also the telescopic mast attached to the rear right quarter. This image is not one of mine, but was taken for me by my friend, the late and sadly missed, Colonel David McDine who both commanded the UK section of the AJIB (Allied Joint Information Bureau) at Dhahran and helped smooth my path during Op GRANBY.

The Expamet mesh baskets seen on this next hard top, also from 7th Armoured, were not uncommon additions and indeed I even spotted a couple of Land Rovers with the very same pattern of front basket at Fallingbostel in Germany when the Royal Scots Dragoon Guards main battle tanks were departing for Bremerhaven and then on the dockside. I believe the vehicle snapped leaving ‘Fally’ (MLR45) was part of a REME formation as it was accompanying armoured repair and recovery vehicles but the other one carried the RSDG saltire on its left door. The one above was spotted on the Tapline Road north of Abu Hadriyah but, other than the red jerboa on the right door, the only marking visible was a small ECH B1 on the front bumper. A neatly rolled tarpaulin was carried in the front basket.

The Land Rover with trailer with a stencilled African shield on the door belonged to the Royal Navy’s MASU (Mobile Air Support Unit) which was tasked with servicing the Royal Navy Sea King fleet; they were nicknamed the MASU Warriors or the Rum Rats. As, although they worked alongside them at the al-Jubayl helicopter base, MASU was not part of CHOSC (the Commando Operations Support Cell) their One-Tens left Marchwood Military Port sprayed in plain Desert Stone, rather than having the two-tone ‘tiger stripe’ paint job applied at Houndstone shortly prior to departure aboard the MV Atlantic Conveyor II.

One slightly unusual vehicle which CHOSC did manage to tiger-stripe was their One-Two-Seven unit ambulance, to which Red Crescent markings had been added since I previously photographed it being painted at the unit’s base near Yeovilton. In 1990/91 the British Army was still using the Forward Control 101” (aka One Tonne) and the Series III 109” battlefield ambulance models, both of which were definitely deployed on Op GRANBY in small numbers, but it is my belief that this Royal Navy One-Two-Seven was the only Land Rover of this specific type to be deployed to the Gulf. However, to paraphrase the late Sean Connery, “never say never” as it can pretty much be guaranteed that just as soon as one publishes a definitive statement about Land Rovers a photo disproving it is bound to appear.

Talking of the FC101, a small quantity of Royal Artillery Rapier Tractors made it out to the Gulf as well, even though these vehicles should have been replaced by newer One-Two-Seven variants. Several of these newcomers were actually lined up at Marchwood Military Port in December 1990, just before CHOSC and the main batch of transport helicopters (RAF Chinooks, RAF Pumas and RN Sea Kings) departed from Southampton. I was told that the new vehicles could not be operationally deployed because their paperwork was incomplete (allegedly they did not have operating manuals for their self-recovery winches so could not be signed off as fit for deployment). When Rapiers were deployed to Kurdish Iraq just a few months later, rather than redeploying the hard-used Royal Artillery FC 101s from the Kuwait theatre, a batch of Supacat ATMPs was hastily converted with missile and equipment racks under a UOR and flown out instead.

Although it was primarily hard top One-Ten Land Rovers that the British Army deployed, quite logically as these ran on diesel and offered greater carrying capacity, a small number of diesel-powered Ninety and petrol-powered Series III 88” models still made it forward after the Land War commenced on 24th February 1991. This poor quality image, a duplicated slide, taken I believe by my friend Laurie Manton shows both; only the rear of the 88” is visible but the short rear overhang identifies it as being a short wheelbase. Part of a medical unit convoy, they are sporting the inverted chevron identification marking applied to all Coalition vehicles just before the 100-hour land campaign to free Kuwait commenced. Note the stowage basket with dayglo air identification panel on top of the Ninety.

My apologies for the poor quality of some of these images, which are 30 year old scans of cheap transparency film.