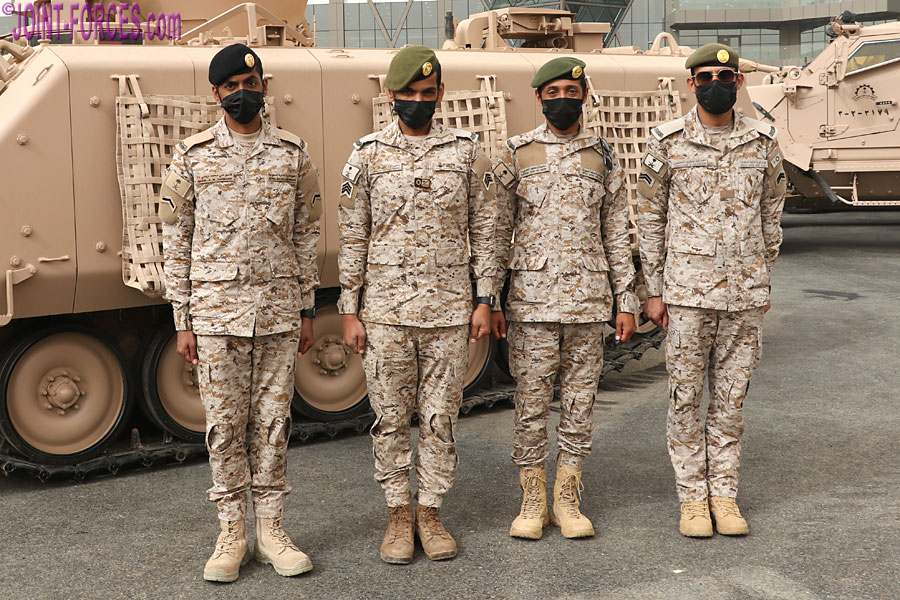 My first opportunity to photograph the then quite new Royal Saudi Land Force digital camouflage pattern arose at the 2014 Annual Warrior Competition held at KATOSC (King Abdullah II Special Operations Centre) in Jordan, but as the participating RSLF Spec Ops team was rather busy at the time it was not really feasible to ask one of them to take time out to pose for a four-view Kit & Camo sequence. Four years later I again had the chance to photograph a Saudi team wearing RSLF digital camo at KASOTC, but again there was no time to shoot a four-view as they were just about to compete in a live-fire stage. At WDS 2022, however, the atmosphere was much more relaxed and one of team displaying examples of the current Saudi armoured vehicle inventory was delegated to meet my photographic requirements.

The armed forces of the Kingdom of Saudi Arabia, like those of many Arab nations, opted in due course to follow the trend set around 2005 by the Hashemite Kingdom of Jordan (with its KA2 family of patterns) and introduced their own digital pixellated camo pattern. The rash of computer-generated ‘digital’ micro-patterns, which started to gain popularity with many armies before the slightly later MultiCam ‘revolution’ kicked off, can trace their origins to the very late 20th Century Canadian CADPAT and slightly later early 21st Century US Marine Corps MARPAT designs.

The Saudi pattern is quite similar to the arid or desert version of the Canadian pattern, using almost the same sandy colour palette, but the most noticeable difference is the addition of a fourth and darker colour compared to the three shades used for CADPAT (AR). If I had to allocate SVG web colour names to describe those used for RSLF digital pattern I think I would plump for Tan (D2B48C) with Peru (CD853F) and a very dark brown chocolate shade ~ darker than SaddleBrown (8B4513) but without the reddish effect of Maroon (800000) ~ on a Bisque (FFE4C4) base. Having said that, bear in mind that lighting and the age/wear of a particular garment can affect how we perceive colour on fabric and also two viewers’ eyes seldom see precisely the same shades. It would have been handy to have had swatches of CADPAT (and maybe other similar patterns such as those of Bahrain, Kuwait and the UAE) in my daysack for direct comparison, but as I didn’t I’ll just have to watch out for different uniform wearers at future events to try to persuade to stand beside each other.

Mainstream RSLF troops did not, unfortunately, play any part in the dynamic display dress rehearsal which I was able to photograph the day before WDS 2022 formally commenced so I was unable to see how this camo pattern performed in its natural environment. However when worn by Saudi SpecOps personnel at KASOTC in Jordan it seemed to work quite well against both urban and natural backgrounds, so I suspect it would be very effective in the sandy and dusty regions of the Arabian Peninsula.