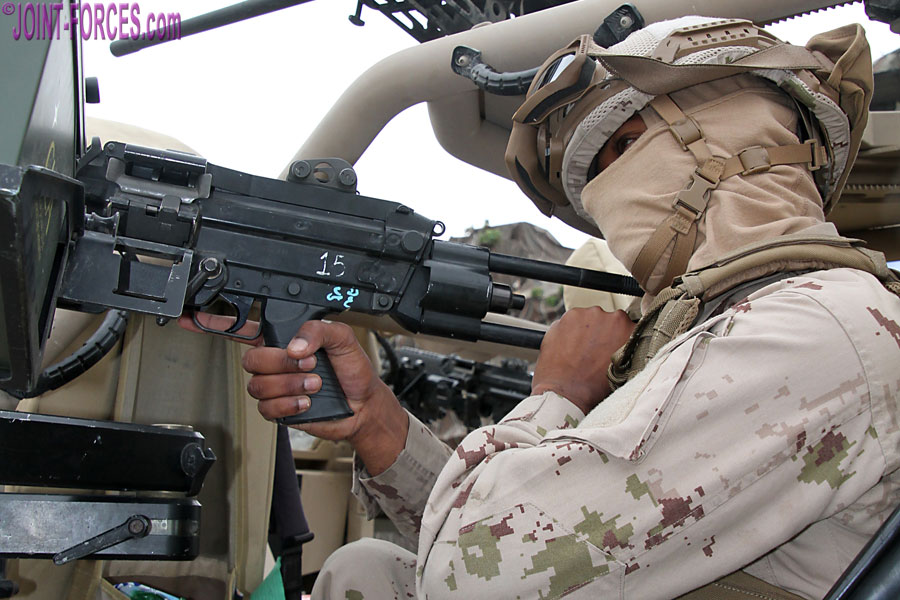 The United Arab Emirates is a federation of seven neighbouring states (Abu Dhabi, Ajman, Dubai, Fujairah, Ras al-Khaimah, Sharjah and Umm al-Quwain) primarily situated on the south-eastern shores of the Persian Gulf, though Fujairah and Sharjah extend across the Arabian Peninsula to the Indian Ocean. The UAE Federation has a joint Army, Navy and Aviation structure, the Union Defence Force, responsible for the defence of all seven nations.

In the late 1980s the UDF adopted a four-colour desert version of British DPM (Disruptive Pattern Material) and after the 1991 Gulf War it turned to the US six-colour ‘choc chip’ pattern for a few years, before changing to the US three-colour ‘coffee stain’ desert pattern. When the United States adopted digital pixellated camouflage patterns early in the new millennium the UDF followed suit, with a non-exact copy of the USMC Desert MARPAT and this camo was widely worn until 2016 when the totally original four-colour M16 Desert Digital Pattern was introduced.

M16 camo is a comparatively sparse pattern of Foliage Green and Red Brown larger shapes with smaller Dark Sand shapes on a pinkish Stone background, plus smaller ‘pixel’ clusters in the secondary and tertiary colours to further break up the background. If I were to allocate SVG web colour names I think I would opt for OliveDrab (6B8E23) and possibly Maroon (800000) as being the closest, with Burlywood (DEB887) as the tertiary colour on a Bisque (FFE4C4) base. I have not seen this camo in open desert, but having lived and worked for several days at a time south of the Liwa Oasis in southern Abu Dhabi on a number of occasions my gut feeling is that operationally it should be better than the previous used patterns.

All Friendly Forces troops participating in the dynamic display at the IDEX 2017 defence and security expo in Abu Dhabi were wearing M16, as were virtually all UAE troops visiting the show, and although the display took place in a dusty urban environment the new camouflage did not look out of place. The soldier who agreed to pose after the display for the four-view sequence was a member of the elite, and quite secretive, UAE Presidential Guard. He was not wearing any insignia but when I asked one of his superiors what would normally be worn he took the national flag and low visibility version of the Presidential Guard patch out of his pocket and applied them to the left arm.

The soldiers taking part in the IDEX 2017 display were wearing the Batlskin Viper A1 (UAE Special Edition) Helmet System paired with Wolfspider Goggles, at that time both manufactured by Revision Military but today the company has split with Galvion now taking on the Batlskin armour range (plus NERV CENTR batteries etc.) while Revision still continues with the eye protection range. The Guard’s load carriage vest with attached pouches and rear hydration bladder pouch were all in Coyote Tan.

At IDEX 2019 (pandemic travel restrictions in force at the time prevented me getting out to IDEX 2021) I was also able to snap UAE troops participating in the daily dynamic display, but on this occasion heightened security and safety constraints prevented me from getting up close to those taking part. This time an all-female army unit took part in one of the assaults and I was able to grab this shot of one section as they walked back to their line of departure at the end of the demo. It was actually only when they took off their helmets to reveal they were wearing the hijab (headscarf) that I had realised they were not male soldiers.