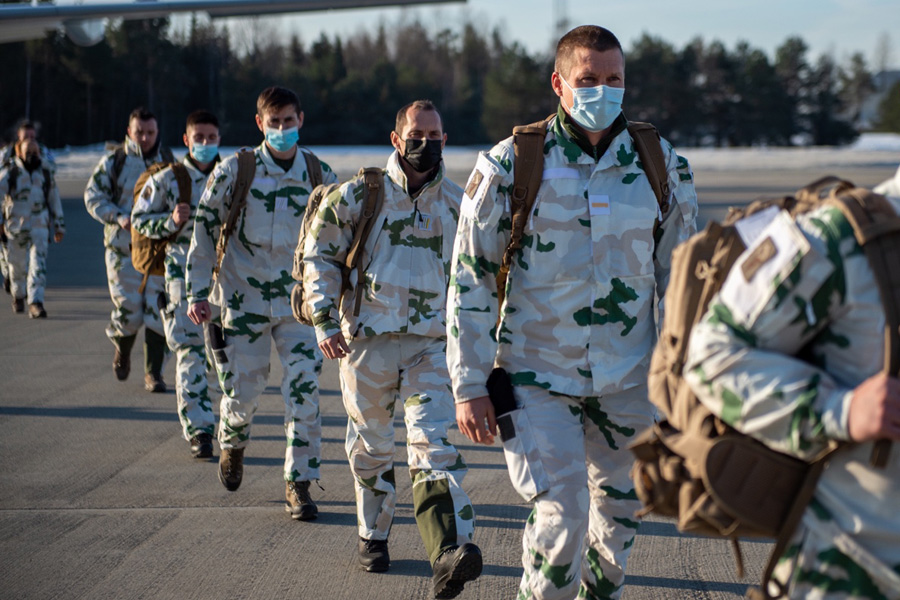 The contingent, part of the Franco-German Brigade and the NATO Response Force (NRF), arrived at Gardermoen Air Station, Norway’s military air base. The base, located 50 kilometres north of the capital city of Oslo, is the home of the Norwegian Royal Air Force’s 135th Air Wing and 335 Squadron.

Among the initial arrivals were soldiers from the French Defence Health Service, the 13th Battalion Chasseur Alpins (Alpine Hunters) and the Etat Major Battalion France- Allemagne (Staff of the Franco-German Battalion). They arrived on a military flight from Châteauroux Airport in central France.

After disembarking, the soldiers were given a short briefing and a cup of coffee as they waited to enter the next location where they were administered COVID-19 tests before departing for their exercise locations. During the exercise, approximately 2,000 French troops will be based at various locations throughout the country.

The Rapid Reaction Corps France, one of 9 NATO Rapid Reaction Corps, will operate out of Lillehammer, while the French Counter-Chemical, Biological, Radiological, Nuclear Task Force will be located in Elverum. The Franco-German Brigade land component command post of the NRF’s Very High Readiness Brigade in Norway will conduct business out of Rena.

BRILLIANT JUMP 22, under the leadership of Allied Joint Force Command Brunssum in the Netherlands, is designed to improve interoperability, readiness and mobility amongst NATO forces.

Following the exercise some of the French troops will remain in Norway to participate in the Norwegian-led exercise COLD RESPONSE. The aim of COLD RESPONSE is to train Allies under challenging climatic conditions, enhancing the readiness and capabilities of participating forces.