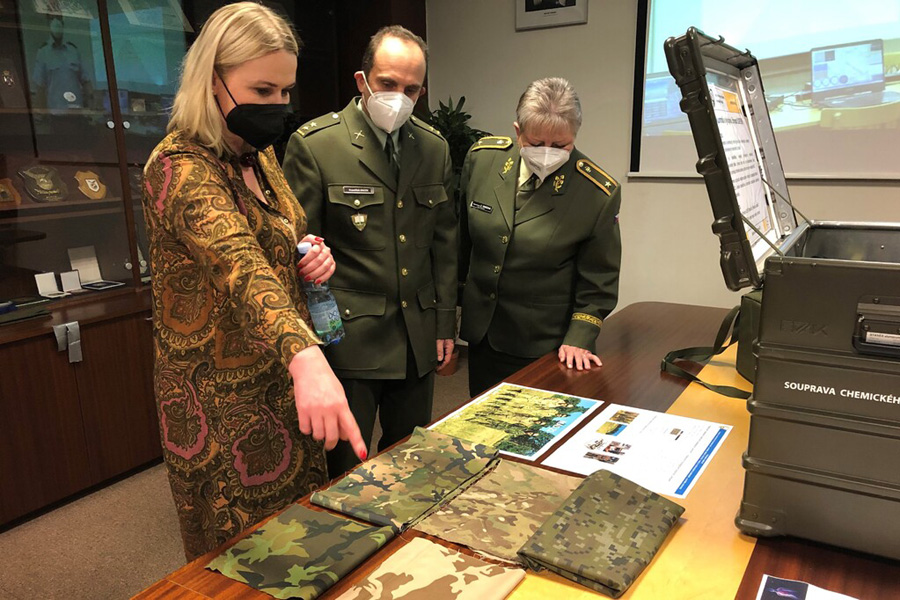 Presentation of projects by the Czech University of Defence [ © Czech MoD]

The Minister attended a working meeting with the UoD leadership to learn more about the mission and remit of the only military university in the Czech Republic. The discussion entertained current missions and plans, primarily driven by high priority requirements of the Ministry of Defence, such as the establishment of the Intelligence Studies Institute, preparation for establishment of the Expert Institute, realisation of new specialist courses and defence research projects. It is in the field scientific and research activities where the University attains outstanding achievements. The debate also covered the study system and ways to increase enrolment.

Rector-Commandant Brigadier General Kročová concluded that “the University stands ready to meet the requirements of the Ministry of Defence and the Czech Armed Forces in all primary areas.”

Minister Černochová highly valued the efforts underway by the UoD to increase attractiveness of study branches, which has reflected in a high enrolment. The Minister also singled out the ‘university brains’ our homeland can be proud of: “They pursue project that will benefit both the Czech Armed Forces and other NATO nations’ armed forces.”

Minister Černochová’s visit included a presentation of some projects realised at the University of Defence and demonstration of outcomes directly benefiting the development of the armed forces, including but not limited to research in individual equipment, military technology, artificial intelligence, new radiation measuring technology based on changes in a blood drop and new trends in radioactive protection.

Finally, Brigadier General Kročová presented to the Minister a plaque of the University of Defence as a token of appreciation of assistance and support Jana Černochová has provided to the University both in the capacity of Chairwoman of Defence Committee of the Chamber of Deputies and now as the Defence Minister.

Editor’s Comment: This prospective Czech camo pattern [1], the existence of which has been known to us for over a year, appears like it might be a composite of Czech vz.95 [2] and MultiCam [3] patterns, in similar style to how British MTP was developed by blending DPM. It is suspected that plans to introduce a new Czech combat uniform in a new camouflage pattern have been delayed by the pandemic. Our thanks to one of our Czech readers, who must remain anonymous, for pointing out the Czech MoD release to us. We will bring an update if/when we hear any more about this interesting pattern through official sources.