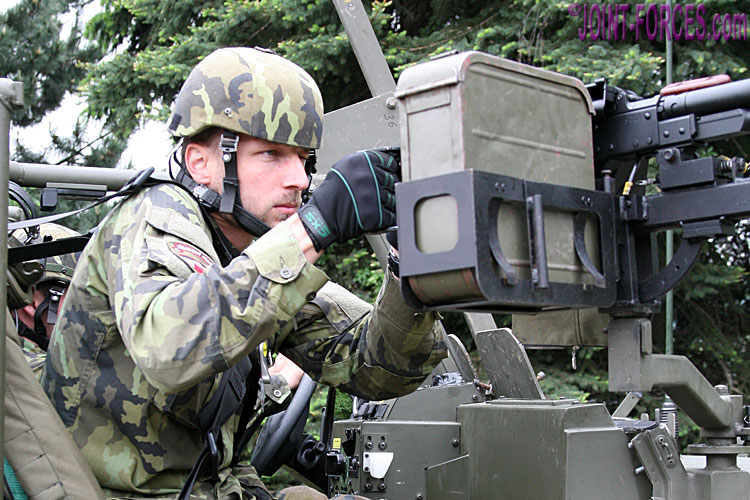 Continuing with the Czechia theme, in this Kit & Camo feature I am focussing on vz95 Leaf pattern as seen here worn by elite Czech Paratroopers in 2015, writes Bob Morrison.

Generally described as being vzor 95, as in pattern 95, though usually abbreviated to vz.95, this camo is widely described as Czech ‘Leaf’ pattern by uniform collectors. Back around 2003 the camouflage specialist who, using the pseudonym ‘Q’, provided sample uniforms and fabric swatches to the now defunct COMBAT & SURVIVAL Magazine established that these uniforms actually entered service in 1993, earlier than many sources stated, but the vz.95 designation has stuck.

A four-colour pattern originally experimentally conceived around 1985, for what was then the nation of Czechoslovakia, the basic design relies heavily on the US Army’s 1948 ERDL (Engineer Research and Development Laboratory) pattern; which eventually would evolved into US Army M81 Woodland camo. Following the amicable 1991 split of Czechoslovakia into the Czech and Slovak Republics, as a result of the demise of the Warsaw Pact and finally achieving independence from Soviet domination, the Czechs resurrected the stalled vz.85 project design, albeit with colour variations which toned down the chocolate brown and bottle green shades while still retaining the pastel lime green and near black colours.

I have previously stated that some commentators, possibly working mainly from photographs or from small samples, suggest that three shades of green plus black are used, and indeed from a distance this camo does appear to be quite verdant. At the IDET defence expo in 2015, however, I was able to compare (and photograph) seven different large sample swatches of different fabrics approved by the ACR (Army of the Czech Republic) for the manufacturer of uniforms and my opinion is that the colours are essentially Pastel Green, Khaki Drab, Earth Brown and Near Black. This confirmed my earlier opinion, having previously handled mint condition surplus uniform jacket, shirt and trousers. It should be noted though that the Khaki Drab and Earth Brown shades can vary from fabric to fabric and, like most IRR-treated fabrics, colours can both fade with washing and/or exposure to strong sunlight and also appear substantially different to both eye and camera in certain light conditions.

The Czech Para NCO, from 43rd Airborne Battalion (43. Výsadkový Prapor) of the 4th Rapid Deployment Brigade, who kindly agreed to pose for the four-view photos appears to be wearing two different camouflage patterns – i.e. predominantly green jacket and predominantly brown trousers – but this difference is mostly to do with wear / washing and different periods of exposure to bright sunlight. The camo swatch photograph is actually of the back of that same ‘green’ jacket but as lighting conditions had changed, with the sun now punching through cloud, it appeared to be more brownish to both eye and camera. The photo of a group of Czech Paras wearing maroon berets shows just how much colour variation there can be between similar garments under the same light conditions.