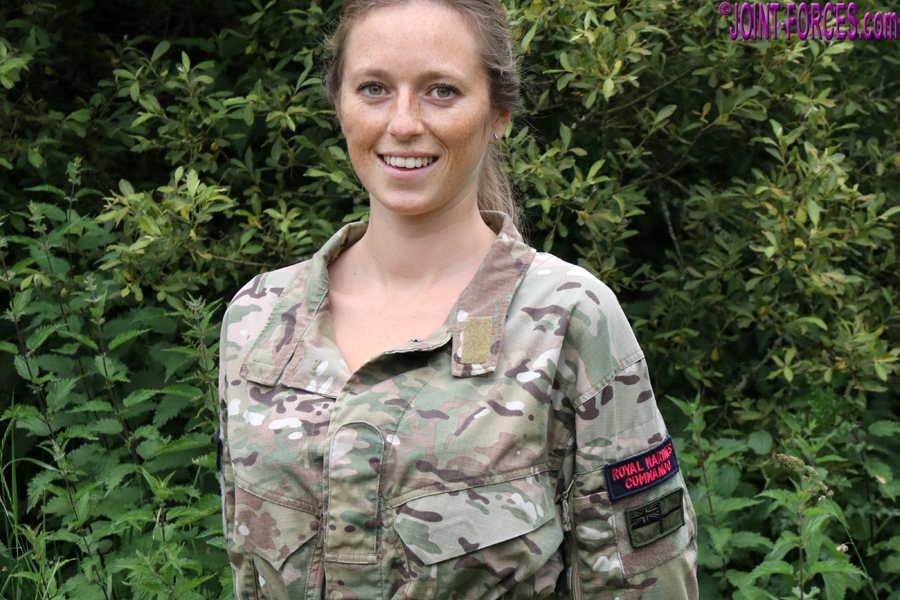 As previously mentioned, our friends at East-West Trading have a specialist inner sanctum for serious camouflage collectors, known as the Camo Lounge, and the CU20 Field Shirt in the accompanying images was borrowed from there. Although it has been worn, it is in near mint condition and came with all insignia plus a lance corporal’s rank slide.

Intended to be worn tucked into the trousers, the CU20 / NSPA Field Shirt in MultiCam has two slanted top access chest pockets with bellowed trailing edges and small vertically zipped pockets on each upper arm. The front flap has concealed 20mm (3/4”) taped buttons, but no secondary zip, and the collar is mandarin-style with a VELCRO closure tab plus the sleeve cuffs are drawn in with VELCRO tabs too. However it is quite normal to see the collar pressed open, especially when body armour / load vest is not being worn, and in the field (or at sea) RM Commandos seem almost invariably to partially roll up their sleeves unless posed for a formal photo.

Although it is normal to wear it over a T-shirt, this Field Shirt can be worn next-to-skin in warmer climes or beneath a Utility Jacket when layering is necessary. The tailoring is quite complex and there are expanding mesh panels behind the sleeve pockets, plus there are mesh pockets at the elbows to allow AIRFLEX pads to inserted if required. There are VELCRO MultiCam pattern pads for attaching hook & loop backed insignia to the upper sleeves and there is a pen pocket next to each pocket zip. Incidentally, although the patents for VELCRO (a composite word formed from parts of the French words for velvet and hook) are time-expired the name is still a registered trademark and should only be used to describe the original company’s products and not similar hook & loop tapes; as Crye Precision used the registered trademark in their catalogue it is probably safe to assume they are using the real thing here.

This particular Field Shirt example has seen so little wear that the care instructions are still easily readable and from these we can see that the fabric is 61% Nylon, 37% Cotton and 2% Spandex (for stretch). It is sized XL (eXtra Large) and L (Long) which made it extremely difficult to find a suitably sized model at short notice, so I am afraid it is not hanging well on Eloise (even though she is of athletic 5′-8” build). As the MoD is currently not allowing general media access to UK Forces, preferring to generate their own (frequently ‘spun’) stories instead, and as the vast majority of the plethora of images produced daily by MoD photographers are only issued for “Current News Purposes” and may not be used for Features, we can only use OGL (Open Government Licence) photos here but fortunately there is one such Project HERMOD 2 image (top) from April which we are able to include here.

Now that CU20 garments have been in service for a year it is likely that used examples will start appearing in quantity on the surplus market in the not too distant future, so if we make it to Military Odyssey again this August Bank Holiday, which is by no means a certainty as my September calendar is filling up fast, you can bet I will be on the lookout around the trade stands for good condition trousers and jackets to photograph for this section of the website.

Incidentally, if looking to buy the commercial version of the Crye Precision G4 Field Shirt, which does not have the rank slide tab found on the NSPA version, this is currently available direct from Crye Precision priced $244.30 (around £181) plus shipping, duty and taxes.