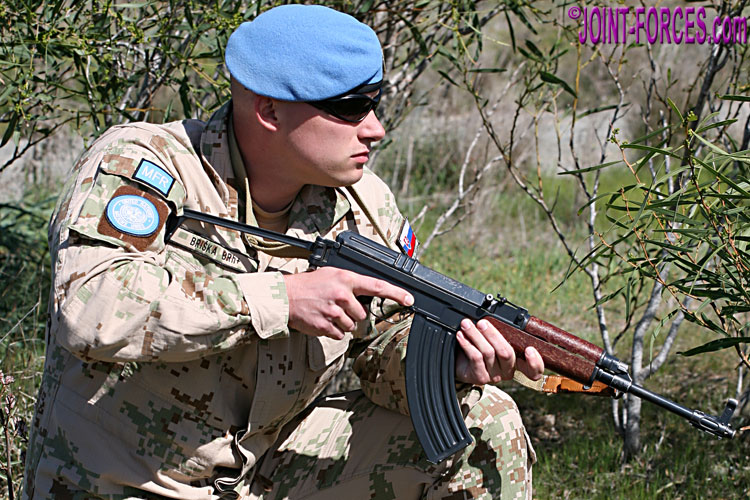 This Slovakian soldier wearing vz.2007 Pust (Desert) Camo in 2014 was a member of the the United Nations Mobile Force Reserve in Cyprus, writes Bob Morrison.

Continuing with the mini-series of camouflage uniforms worn by members of the United Nations on UNFICYP duties on Cyprus at the time of the 50th birthday of the mission, in this article I look back at a member of the Slovakian Contingent or SLOVCON which leads the Sector 4 formation in the Buffer Zone.

This Slovakian Blue Beret serving as a Rifleman with the 1st Rifle Section of the 2nd Platoon of the Mobile Force Reserve was actually a Lance Corporal but he wore no rank insignia. His combat uniform was in the arid theatre variation of the vz. 2007 Les (Woodland) digital camouflage uniform, sometimes nicknamed Kocky (Cube) pattern but which is officially designated vz.2007 Púšť or Pust (Desert) pattern; vz. being the abbreviation of verze, which translates as version. As the the names suggest, both patterns were introduced in 2007 and they replaced Slovakian equivalents of the Czechoslovak vz.95 and vz.85 patterns respectively.

The Slovak Pust pattern is three-colour with the base being a light stone shade. The secondary colours, the cubes, are light green and reddish brown. Although many of the shapes do appear to be cubes, close inspection shows that not only are the true cubes of different sizes but there are also rectangular shapes, including some which are long and thin, so it erroneous to call it a cubic camo. These square and rectangular shapes – pixels if you will – are also considerably larger than most current generation digital patterns; one of our camo collector friends, ‘Sniper John’ who test destructs combat boots after my initial reviews, asked me at the time if this might be the same as the 2006 Kuwaiti Desert digital camo (which he had an example of) but the Slovak shapes are markedly larger plus it only has three colours whereas the Kuwaiti camo has four.

Like many modern era Desert camo patterns the Slovak Pust uses a slightly pinkish stone shade as its base, primarily because this colour not only blends in with many arid backgrounds but it also reflects the surrounding predominant colour. This means that if it is being worn in an urban environment the overall garment can take on a greyish hue and in a more verdant environment it can become less pink to the naked eye with the green and brown adding depth. In a Cyprus spring Pust is not as good as MultiCam which, despite armchair experts continually telling me otherwise, based on what my eyes have told me in various scenarios I believe to be a superb multi-environment camo; however when the island turned to shades of capuccino in summer through to early winter I reckon the Slovak camo would have been excellent.

When I visited the multinational Mobile Force Reserve on UNFICYP’s 50th Birthday there were ten Slovakians, including the Lieutenant in command of 1 Rifle Platoon, detached from SLOVCON and spread through the eight Rifle Sections. On the upper right sleeve they wore the rectangular MFR patch and circular United Nations badge and on the left they wore their national flag. Many SLOVCON troops operating on the ground in Sector 4, the easternmost section of the Green Line, also wore a low visibility UN patch with the national insignia of the five contributing nations (Slovakia, Hungary, Croatia, Serbia and Ukraine) on their left arm.