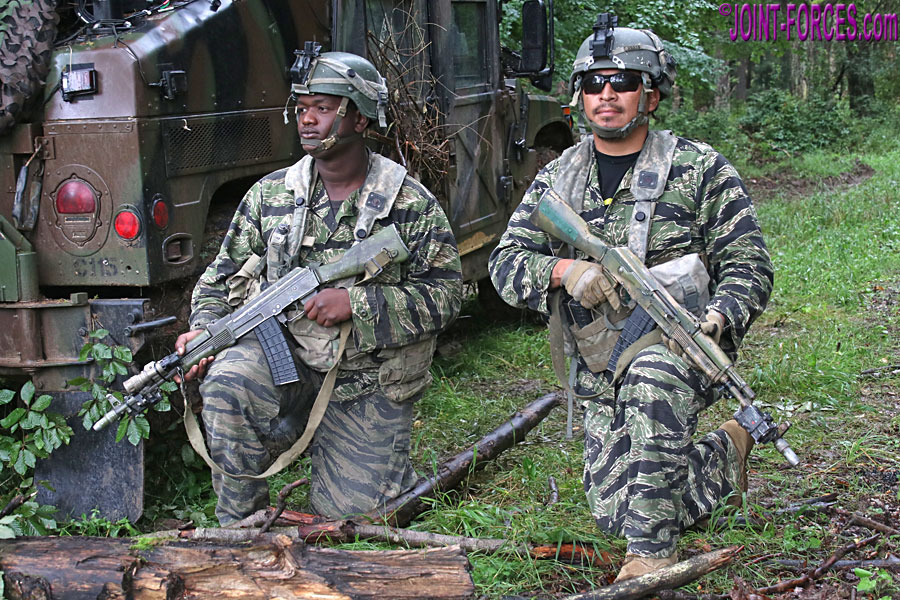 The dedicated USAREUR (US Army Europe) OpFor (Opposing Force) battalion operating primarily on Hohenfels Training Area in Bavaria, as documented by Carl Schulze in his two-part USAREUR OpFor ~ Men In Black In 2014 feature, predominantly wears black combat uniform on exercises but they also have the option of wearing Tiger Stripe camouflage if the exercise scenario requires a distinct alternative look.

The two soldiers seen here were assigned to Cherokee Company of 1st Battalion of the 4th ‘Warriors’ Infantry Regiment, which has been permanently stationed in Hohenfels for thirty years as the dedicated CMTC then JMRC (Combat Maneuver Training Center then Joint Multinational Readiness Center) OpFor training formation; although permanently garrisoned in Germany since 1990, 1-4 IN also operationally deployed reinforced companies to Afghanistan several times between 2004 and 2011. During Ex. SABER JUNCTION 20 Cherokee Company (the battalion’s companies bear the names of Native Indian tribes) operated in a different role from other OpFor troops (including Georgian, Latvian, Romanian, Ukrainian and US contingents) and although we are not able to comment on the precise training scenario it was obvious they were participating as conventional troops rather than irregulars or militia.

The Tiger Stripe camo their uniforms are made from is one of a plethora of slightly different patterns widely used in the Tropics / Far East and it appears it may possibly be one of the Philippines variants, though I was unable to check garments for manufacturer’s labels to ascertain precisely. The Tiger Stripe family of patterns evolved from post-WWII French Lizard (or Leopard) patterns, themselves derivatives of the British WWII Brushstroke pattern, and although there is has been a great deal of variety over the years the Tigers remain mostly horizontal in nature with large patches of black, or near black, to give depth. Almost invariably four-colour in design, the Tiger patterns usually have a light stone base with green as a secondary colour plus either an olive or brown shade as the minor colour.

My sample swatch, photographed in the UK in natural light, is very similar in pattern to the uniforms worn by Cherokee Company in Bavaria, photographed with on-camera flash as the guys were well inside the treeline on a very dark and overcast rainy day, but I cannot be sure it is an exact match. It is also interesting to note, from the trousers worn by the kneeling soldier on the left, how a pattern can lose much of its depth with age and wear; this can be either an advantage or a disadvantage dependent of both surroundings and lighting conditions.

Tiger Stripe uniforms were first associated with the US Army during the Vietnam War when they were adopted by Special Forces units, most notably the 5th Special Forces Group. In August 2019 ‘Green Berets’ of 5th SFG (Airborne) instructing on the joint exercise APACHE SCORPION with the 101s t Airborne were photographed wearing a, different from the above, variant of Tiger Stripe camo at Fort Campbell in Kentucky.

If all goes to plan, my next article in this section should be on the new M18 Bulgarian ‘digital flecktarn’ camouflage.