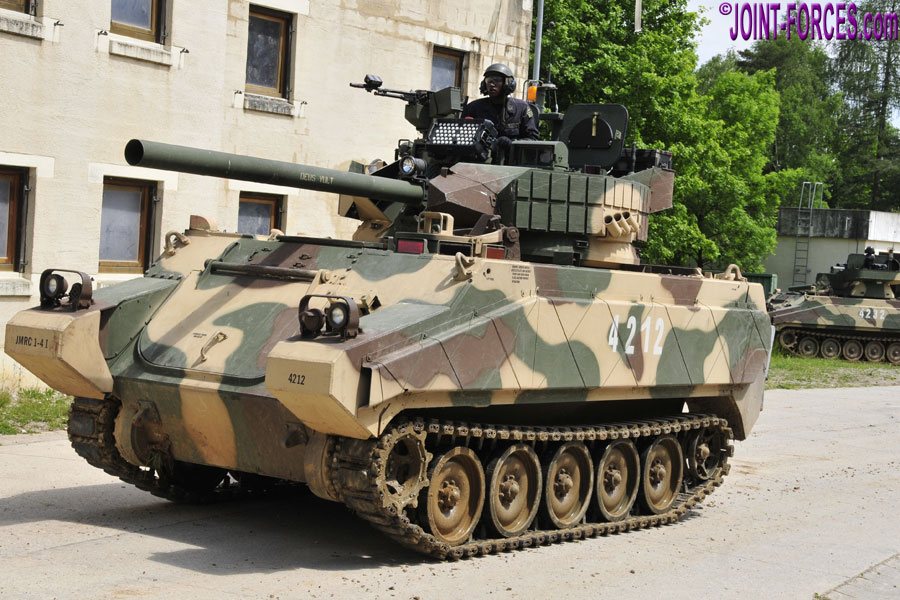 In May 2014 Carl Schulze worked with USAREUR ‘Men In Black’ OpFor shortly after Russia stunned the world by annexing the Crimean Peninsula, writes Bob Morrison.

As explained at the start of Part 1 of this two-parter, before I pen my overview of the recent SABER JUNCTION 20 certification exercise for the US 173rd ABCT we are taking a look back at a detailed article Carl produced in 2014 on the dedicated OpFor unit at JMRC Hohenfels after he spent a week working with them. Over to Carl:-

The MILES II Battlefield: At the JMRC (Joint Multinational Readiness Centre) SAWE MILES II (Simulated Area Weapons Effects / Multiple-Integrated Laser Engagement System II) equipment is used for force-on-force training. Consisting of a large number of sub-systems, including man-worn systems, combat vehicle systems, shoulder-launched systems and controller devices, SAWE MILES II is operated within a fully integrated tactical training environment and backed by the Observer Coach Trainer (OCT) and Battlefield Effects Team of the JMRC. The instrumentation available at the JMRC allows electronic data collection and position monitoring of all troops and vehicles, including their activities on the battlefield. The tactical communication is also recorded and video footage of activities is gathered by mobile video crews operating in the exercise area.

To simulate direct fire engagements all weapons are equipped with MILES II laser transmitters, which emit an eye-safe laser when a weapon is fired, and detectors engaged by the laser produce an audio and/or visual signal for a Kill, Hit, or Near Miss. Visual and audio cues produced by pyrotechnics on the firing vehicle create a signature for acquisition by the targeted vehicle. When hit, the laser transmitter of a soldier’s weapon, or the armament of a vehicle, is disabled. The SAWE produces visual and audio cues and assesses battle damage and casualties for NLOS (Non-Line Of Sight) area effects weapons, such as artillery fire. In the case of a Near Miss, Hit, or Kill the SAWE sets off pyrotechnics in vehicle mounted Audio-Visual Devices (AVD).

When deployed on the MILES II Battlefield the soldiers of the OpFor, as well as the exercising troops, wear a MILES II Man Worn Laser Detector Harness and Helmet Halo and their weapons are fitted with MILES II Small Arms Transmitters (SAT). Among other SAWE MILES II components, combat vehicles are fitted with: a Main Gun Transmitter; Small Arms Transmitters, for secondary armaments; Detector Belts; the Vehicle Control Unit/Kill Indicator; the Hull to Turret Transmitter; the Fire Control Interface, the Radio Interface Assembly; the Vehicle Instrument Interface Package; and the Vehicle Display Assembly. The MILES transmitters of the OpFor vehicles are configured to simulate the effects of foreign weapons such as, for example, the 125mm 2A46 smoothbore tank gun that is fitted to the T-72, T-80 and T-90 main battle tanks.

Weapons and Equipment: During their employment as conventional Opposing Forces, paramilitary units or irregular forces the ‘Warriors’ either wear black Battle Dress Uniform (BDU), Tiger Stripe camouflage BDU, or an assortment of civilian clothing. Civilian garments available include traditional clothing for current and possible future operational theatres, such as the pakul, shalwar and kameez.

When acting as conventional or paramilitary forces the soldiers use the full range of in-service US Army infantry weapons ranging from the 9mm M9 pistol through to the 5.56mm M4A1 carbine to the M249 Squad Automatic Weapon (SAW) and the 7.62mm M240B machinegun. Heavy infantry weapons such as the 12.7mm M2HB-QCB heavy machinegun and the 40mm Mk19 MOD3 automatic grenade launcher are also fielded. Anti-armour weapons available include the M136 AT-4 Light Anti-Tank Weapon and the Tube Launched Optically Tracked Wire Guided (TOW) missile system as well as the Javelin Close Combat Missile System – Medium. Special OpFor weapons are also fielded, such as the Man-Portable Aircraft Survivability Trainer (MAST) which simulates a surface-to-air missile threat for aviation assets.

M113A3 OpFor Surrogate Vehicles (OSV) acting as BMP-2s are employed by the rifle companies of the battalion. These have a crew of two and carry six dismounts in the back, with SAWE MILES II equipment on the vehicle configured to simulate the effects of a 30mm cannon or an AT-5 Spandrel anti-tank guided missile system. The tank company of the battalion fields the M113A3 OpFor Surrogate Vehicle – Tank (OSV-T) which simulates a T-80 main battle tank (MBT) on the MILES battlefield; the SAWE MILES II equipment of this vehicle is configured to simulate the effects of the 125mm 2A46 smoothbore tank gun or a 7.62mm coaxial machine gun.

Battalion History: The 1st Battalion, 4th Infantry Regiment (1-4IR) traces its origins back to the 4th of September 1792, when the 4th Sub-Legion of the Legion of the United States was formed; it was one of the first regular US Army units manned by volunteers. Since then it has had a long and distinguished history through many wars but for this article we are concentrating on its modern OpFor role.

On 16th November 1990 the battalion was officially assigned the OpFor role at the Combat Maneuver Training Centre (CMTC), which became the JMRC in 2005. Back in 1990 the unit consisted of the HHC, three rifle companies, one tank company and a combat support company, which was disbanded in 1995. During its OpFor time the unit has helped to train US and other nation’s forces for deployments to Bosnia, Kosovo, Iraq and Afghanistan. In this role it was the last unit of the US Army to operate M60A3 TTS tanks, which were finally retired in 2005.

From 2004, in addition to fulfilling the OpFor role at the JMRC, the 1st Battalion, 4th Infantry Regiment regularly deployed elements to Afghanistan under Operation ENDURING FREEDOM and with the International Security Assistance Force (ISAF).

During their Afghanistan deployments the soldiers of the 1st Battalion, 4th Infantry Regiment proved that they could not only provide a highly trained and potent OpFor but could also stand their ground as a fully operation fighting force. Additionally, the Afghanistan deployments benefited their OpFor skills, allowing them to portray insurgents even more realistically than they already did. While the 1st Battalion, 4th Infantry Regiment is not the only reason that the JMRC can provide high level force-on-force training to visiting units, the ‘Warriors’ certainly play a large share in this.

Editor’s footnote: When this article was written Europe had essentially been peaceful for close to a quarter of a century, though the Russian foray into the independent Eurasian nation of Georgia in 2008 had caused a temporary blip, and consequently until just before this visit by Carl the US Army had been reducing its presence in Germany. In the spring of 2014, before heightened tensions kicked in, it was still possible for a specialist defence photojournalist like Carl to spend a week working inside a US Army training area taking photographs to provide comprehensive coverage of a unit or exercise, but today such comparatively relaxed opportunities are rare indeed.