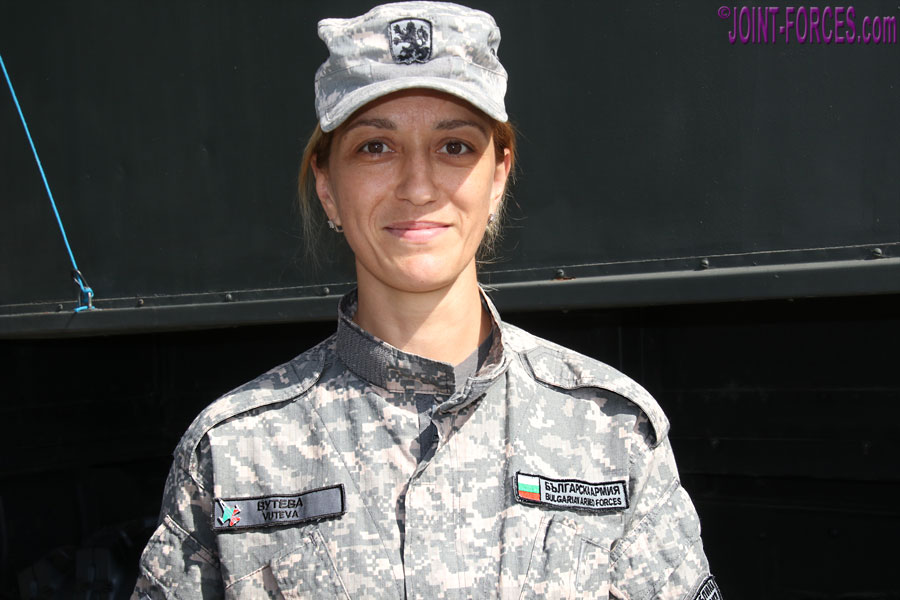 In 2018 Bulgaria’s Ministry of Defence introduced two new camouflage patterns for their Army and a third pattern for the Bulgarian Air Force, reports Bob Morrison.

At the recent HEMUS 20 defence expo in Plovdiv, I had the unexpected opportunity to quickly photograph a member of an air defence unit who was wearing the now widely issued M18 Bulgarian Air Force (BAF) camouflage pattern. Very similar to the relatively short-lived US Army Universal Camouflage Pattern or UCP, this three-colour ‘pixellated’ Bulgarian camo is a bit of an enigma as in bright light conditions it has an overall sandy grey appearance yet under subdued light and in shady urban environments it can appear distinctively bluish on camera.

When I photographed the air defence battalion operative in the lead image, and her colleagues beside their command post truck, the sun was was high overhead in the early afternoon on an unseasonably hot (28°C) early October day under a cloudless sky. By comparison, in the photograph of General Jeff Harrigian, (Commander US Air Forces in Europe and Air Forces Africa) and the two Bulgarian Air Force colonels taken just 18 days later on a visit to Graf Ignatievo Air Base the lighting conditions and light temperature look to have been markedly different and one could be forgiven for thinking the colonels were wearing a different coloured camouflage. It is possibly also worth noting that my shots were captured on a Canon camera and Airman 1st Class Woolever used a Nikon camera so, just in the days of Fuji v Kodak v Agfa film, our uncorrected images would never colour match due to the different camera manufacturers’ processes.

Although I do not believe BAF M18 and UCP camouflage to be exactly the same pattern, to my eye the colours are very similar; though having said that if examples of one were to be laid out alongside the other, which of course I was unable to do, I could be proved wrong. If UCP colours have indeed been used, these would be the US Federal Standard 595C shades designated Foliage Green 502 and Urban Gray 501 on a Desert Sand 500 base. My ageing eyes do not see Foliage Green 502, the darkest of the three UCP colours, as being a green shade and I would class it as more of a grey (or gray in US spelling) shade, but others may disagree and I have even seen it described as being sage green. It always makes me chuckle when I see scale modellers arguing about precise colours on internet forums with only old photos for reference, as out in the real world many different factors affect how we see and record colours.

Unfortunately time constraints meant I was unable to take a set of four-view shots of one of the Bulgarian Air Force team at HEMUS 20, but I did get the chance to photograph all four sides of a soldier wearing M18 Bulgarian Army (temperate version) camo and this will be the focus of my next article in this series.