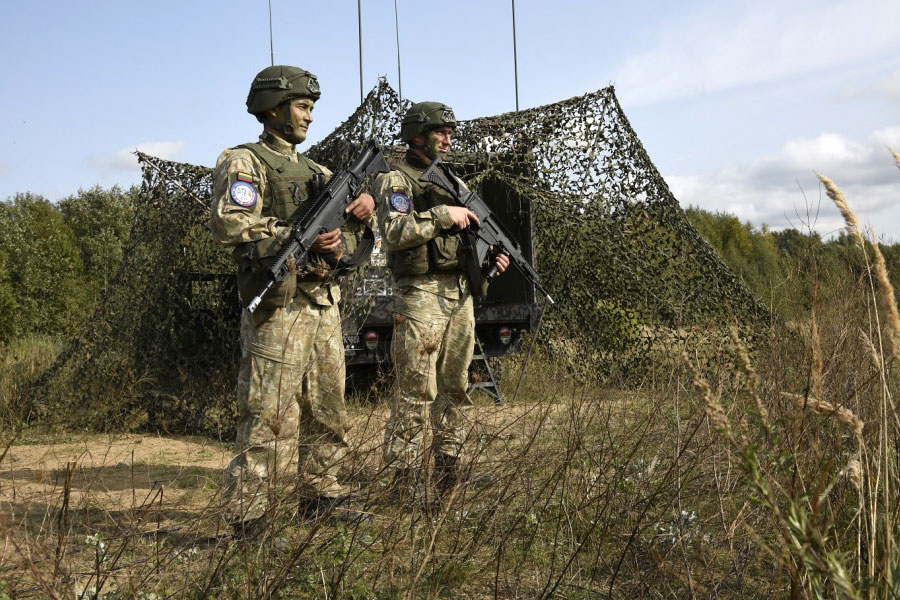 A DV and Media Day of multinational Ground-Based Air Defence on TOBRUQ LEGACY 20 took place at the Lithuanian Air Force Base in Šiauliai.

“I would like to highlight two points of importance. First, we are looking at the COVID-19 situation as an impulse that brings new opportunities – not as a challenge. That proves that NATO allies are able to work and fight in different circumstances, even amidst a biological threat. Second, we all know this exercise has pulled together Ground-Based Air Defence personnel from ten allied countries, different procedures, different equipment. We have put together a unified system using that which we had, and we were learning to stand shoulder to shoulder and fight in realistic conditions. The key focus of our exercise was interoperability of equipment and procedures,” Commander of the Lithuanian Air Force Col Dainius Guzas told what was important about the exercise.

“This is the first time Lithuania is hosting an exercise of such scope. We are training according to common NATO battlefield management procedures, from acquisition to destruction of targets, on a daily basis, involving command and control elements of every level, from Air Operations Centre to a fire unit in a fighting positions, if that’s what a task requires,” Director of the exercise, staff officer (Lithuanian Air Force HQ) Lt Col Vitalijus Sadrejevas said.

International Exercise TOBRUQ LEGACY was first held in 2015 by air defence personnel of the Czech Republic and Slovakia. In 2015 soldiers of the Lithuanian Air Force were training NATO air defence operations in a platoon-sized formation in the Czech Republic, in 2016 – in a battery-sized unit in Slovakia, and in 2017 Lithuanians cooperated with our allies in training to provide command and control of an international surface-based air defence unit of a level equivalent to the Air Defence Battalion.

TOBRUQ LEGACY 17 was hosted by Lithuania: it involved approx. 500 of training audience, 30 air defence systems from Lithuania and four other NATO allies – the United Kingdom, United States, Latvia, and Poland. The exercise was held across sites in Lithuania, Czech Republic and Romania concurrently, under the command of a Joint Force Air Component Command established for the exercise in Romania. The United States for the first time deployed the long-range air defence system Patriot for the exercise in Lithuania: it is one of the most cutting-edge missile and new generation aircraft defence systems in the world.