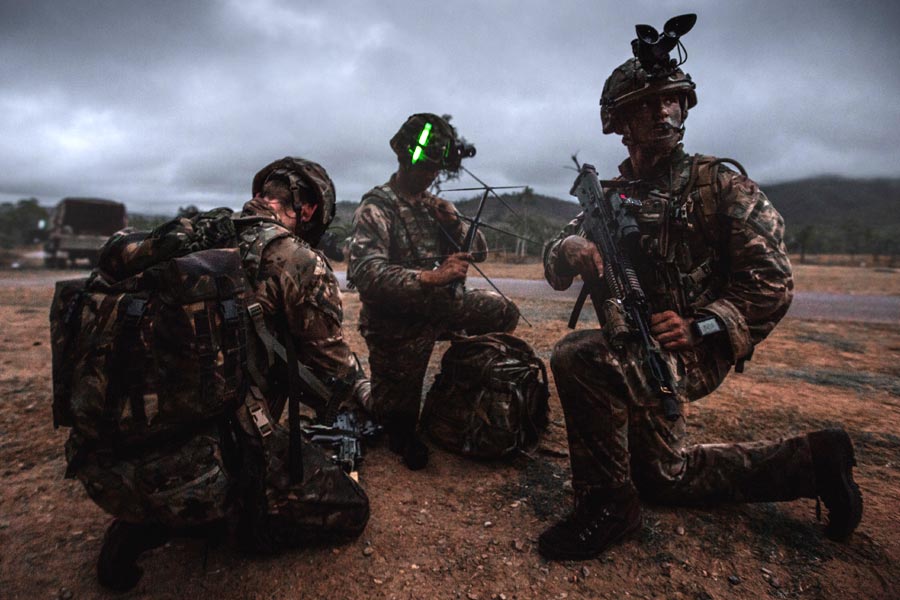 A team of Royal Marines signallers establish radio communications during experimental training as part of the development of the the Future Commando Force concept during TALISMAN SABRE 19 [Crown Copyright: LCpl James Clarke]

The Royal Navy has announced a Royal Marines Commando unit, the Vanguard Strike Company, is being created to shape the Future Commando Force.

News Release, 20 July 2020: A select group of commandos will form a new Vanguard Strike Company to shape how the Royal Marines Commandos of the future will operate around the globe. These trailblazers will have access to game-changing technology and weaponry as they head on their first deployment next year.

The Royal Marines are currently undergoing a bold modernisation project – known as the Future Commando Force programme – which will overhaul how the world-famous green berets operate. As part of this restructuring, more than 150 Royal Marines and Army Commandos will come together this autumn to form the Vanguard Strike Company. The company will head on its maiden deployment in mid-2021 after further trials later this year and ongoing equipment, structural and tactical experimentation associated with the Future Commando Force.

Commandant General Royal Marines, Major General Matt Holmes, said: “The Vanguard Strike Company will lead and inform how the Royal Marines and Army Commandos will operate and fight in a dynamic, technological era of warfare.

“We envisage several of these networked sub-units persistently forward deployed around the globe, with an array of sophisticated enabling capabilities, to present dilemmas to adversaries whilst supporting partners. These will all be at high-readiness, as a capable forward contingency force at the core of the Royal Navy’s Littoral Response Groups.”

The deployment next year will see the first practical demonstration of kit, equipment, training and organisational change necessary to shape the concept further and bring it quickly to the forefront of the Royal Navy’s contribution to national security. The elite commandos will work in small, versatile teams that will be tailored for the respective mission they will be facing – calling on areas of expertise and hone skills necessary to bring an advantage depending on the type of operation. This will give the UK a more agile and lethal capability, ready for missions anywhere in the world at a moment’s notice, whether that’s for war-fighting, specific combat missions such as commando raids, or providing humanitarian assistance. This is about returning commando forces to their roots: to operate at reach and in all theatres, including the Arctic, as the spearhead of operations.

It has already been announced that Royal Marines Commandos will have a new uniform as part of the bold transformation. Fit for a new era of warfare, it is in keeping with the maritime traditions of the Corps and honours their Commando forebears through insignia. The NATO procured uniform – which is being procured from USA-based firm Crye Precision – is lighter-weight, has higher tear-strength, is faster-drying and is more breathable than typical 50/50 cotton/nylon clothing. The Vanguard Strike Company will wear this uniform on their first deployment.