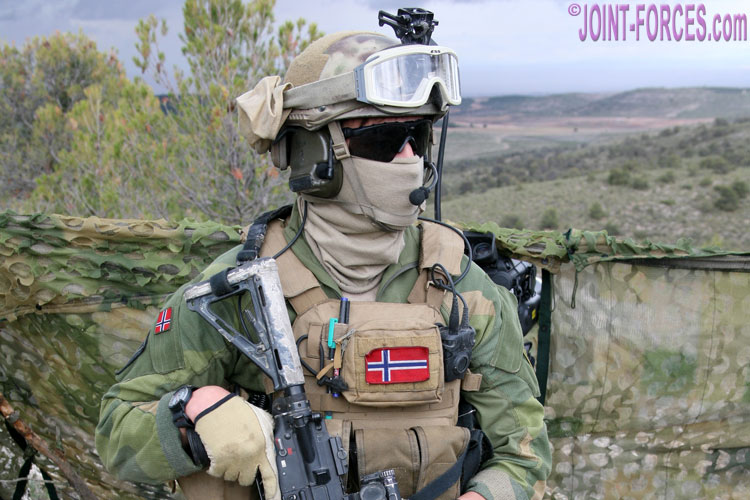 Continuing our Northern European camo journey I am now notionally crossing the Skagerrak to focus on the Norwegian Army M98 or M/98 Pattern, writes Bob Morrison.

The Norwegian M/98 camouflage pattern, first introduced around 1998 as its name suggests, is actually a minor pattern and colour variation of the earlier M/75 pattern initially used for combat smocks and worn with plain green combat trousers.

Consisting of large rounded patches of what I would describe, using X11 web colour names, as DarkOliveGreen (#556B2F), YellowGreen (#9ACD32) and Tan (D2B48C) this very basic camouflage is colour-wise quite close to faded examples of the first pattern of British WWII Denison smocks but without the distinctive brushstroke edges. It should, however, be noted that the colours of M/98 uniform and equipment can vary quite a bit in shade from garment to garment and from fabric to fabric.

The shapes of the M/98 pattern are quite large and mostly have rounded edges, though there are occasional small straight edges where two colours abut. As this is a disruptive, rather than mimetic, pattern it tends to do its job quite well when the soldier is viewed from a distance. The lightest, Tan, shade alters the overall effect by reflecting the general shade of its surroundings to some extent, and especially in the bright conditions often found in Scandinavia (and around the Baltic) in the lighter months of the year.

The soldier in the lead photo and the first four-view image set was a JTAC (Joint Terminal Attack Controller) spotted during Exercise TRIDENT JUNCTURE 15 on the CENAD Chinchilla Training Area in Spain in early November 2015. He was one of a four-man team from the Observation Platoon of P (Piraya) Battery of Norway’s 550-strong Artillery Battalion (Artileribataljonen) who are highly trained to call in both artillery and ground attack aircraft strikes by National and NATO assets. For the duration of this exercise the contingent from Piraya Battery were serving under British Army command. They used Polaris Sportsman 6×6 ATVs for mobility and to transport their specialist observation and communications equipment.

The next four-view image set of a soldier wearing M/98 is of one of the Vikings from Norway’s elite Telemark Battalion who participated on Exercise NOBLE JUMP ’15, held in June at the Świętoszów Training Area in Poland. Normally when Carl and I work with this mechanised infantry battalion it is on winter exercises, often in the Arctic north, where its soldiers wear snow camouflage over-suits so it made a change to photograph a Viking wearing just his national three-colour camouflage uniform. His load carriage equipment was mostly Coyote Tan and visually this colour combination worked very well on the light scrub and sandy soil terrain of the dusty Polish training area. Although Norwegian load carriage equipment and pouches etc. are available in M/98 camo, as the Telemark Battalion served extensively in Afghanistan, where they wore a sand, brown and tan desert variant uniform, they adopted Coyote Tan kit for that operational theatre.

The Telemark Battalion elite Sniper Spotter NCO featured in this next four-view set was participating on Exercise IRON WOLF ’17 in Lithuania where a Norwegian contingent was serving with the NATO eFP (enhanced Forward Presence) mission. He and his colleagues were wearing Coyote (in the past usually called Earth Brown) laser weapons effect simulator over-vests on top of plate carriers in a similar plain colour, which altered the overall camouflage effect. It is also worth noting that the photos were taken just before noon in mid-June on a very bright day. The NCO’s high cut ‘bump’ helmet was hand painted but a couple of his team wore M/98 camo helmet covers.

The Telemark Battalion, which consists mostly of professional (i.e. non-conscript) soldiers is permanently assigned to the NATO Response Force spearhead formation, as part of its Immediate Response Force component, and therefore its troops usually wear the NRF shield badge on their left arm with IRF Brigade in the bottom right corner. On their left arm they usually wear a black patch with a low visibility version of their unit insignia and above this a small version of their national flag is usually worn.