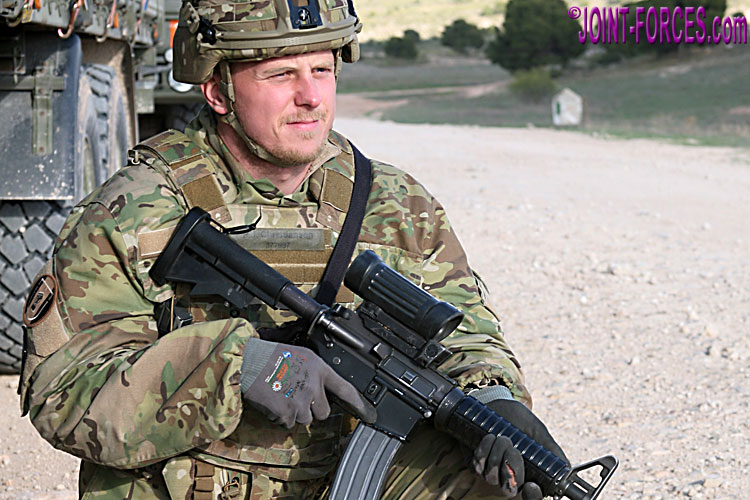 For over a quarter of a century Danish troops wore a verdant 3-colour derivative of German Flecktarn until M/11 Multiterrænsløring pattern was introduced, writes Bob Morrison.

Danish military personnel serving in Africa with the United Nations were issued a desert variant of their standard M84 Kampuniform camouflage pattern, designated M/01, and they later continued to wear this camo in both Iraq and Afghanistan but I due course Denmark adopted M/11(or M11) Multiterrænsløring as a universal pattern to replace both.

M/11 Multiterrænsløring (which translates literally as Multi Terrain Blur) is actually genuine MultiCam pattern, the commercial derivative of the 7-colour multi-environment camouflage designed around the cusp of the millennium by Crye Precision for a US Army requirement. After trials the Americans decided not to run with the Crye Scorpion ‘analogue’ pattern, selecting the subsequently unpopular and short-lived ‘digital’ Universal Camouflage Pattern or UCP instead, but realising they had a saleable product the company modified their design slightly to allow commercial sale and MultiCam pattern was born.

MultiCam was originally not introduced for conventional forces use, though its first documented (by the late Yves Debay) operational use was possibly with Government militia in Chad in early 2008. Increasingly Special Forces had begun wearing this commercial camo in the second half of the first decade of the new century, but this exclusivity of use by SF units would not last for very long. The UK soon realised the suitability MultiCam for operational use by conventional forces in Afghanistan’s Helmand Province and produced its licensed MTP variant, which successfully blended MultiCam and DPM designs, first for troops deploying on Operation HERRICK from the spring of 2010 and gradually for universal use to replace Temperate DPM (Disruptive Pattern Material) and its Desert variant. Australia followed later that year in adopting MultiCam for troops deploying to Afghanistan, though subsequently it would produce its own derivative with a colourway closer to its unique mid-1980s AUSCAM pattern.

Other nations, realising the operational effectiveness of MultiCam (and MTP) across a range of terrains and environments, began to consider adopting this camo pattern but Denmark can probably lay claim to being the first major military user to universally issue it. In a November 2011 press release it was announced that both M/84 pattern plus it M/01 desert colourway derivative would be phased out in favour of the new M/11 Multiterrænsløring and it was also acknowledged that this new pattern was none other than Crye Precision’s MultiCam. For more on this commercial pattern and its derivatives see: Know Your MultiCam ~ OEFP or OCP?

When Denmark introduced M/11 Multiterrænsløring Major Thomas Nico Jørgensen, head of the Equipment Section of Denmark’s Defence Material Service explained that the new camouflage pattern helped soldiers blend more naturally with their surroundings across about 80 percent of all terrain. It was stated that sufficient stocks of the new uniforms should be available to clothe Danish soldiers deploying to Afghanistan in 2013. By late 2015, when most of the photographs in this article were taken, M/11 Multiterrænsløring was now in widespread use throughout the Danish Army.

My primary focus here is one of a two-man truck crew resupplying the Danish battalion working under British command on Exercise TRIDENT JUNCTURE ’15 on the CENAD Chinchilla training area in eastern Spain. All issue uniform items, including his plate carrier and Revision Batlskin Cobra helmet cover, were in M/11 Multiterrænsløring camo pattern. Denmark, just like Britain did with MTP, went down the brown boot path when it adopted MultiCam but this driver wears older black boots with toe protection, which his logistics role required.

The two primary brown boot makes adopted by the Danish Army at this time were Alt-Berg and Magnum; the close-up shots are of the feet of Danish soldiers wearing issue ALTBERG Defender Mk.1 and ALTBERG Desert Microlite boots during SABER STRIKE ’15 in Poland. At the same time I also photographed a Danish tank crew wearing various M/11 Multiterrænsløring uniform items, including a one-piece tanker’s coverall, during this multinational exercise on Drawsko Pomorskie Training Area.

If all goes to plan, I’ll turn my attention to Norwegian camo next.