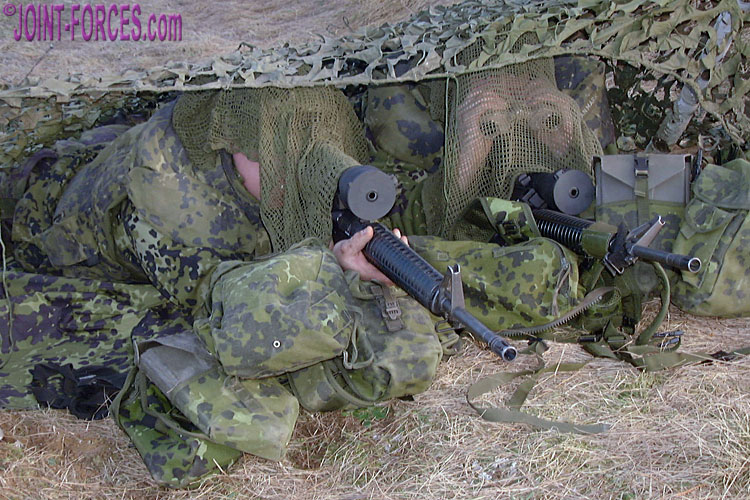 For this latest article I am moving to the western end of the Baltic Sea to focus on Denmark and their M/84 or M84 Kampuniform pattern derivative of Flecktarn, writes Bob Morrison.

The Danish M/84 Kampuniform pattern – the word translates as combat uniform – was trialled from 1978 but not accepted until 1984, when it replaced the plain olive green uniforms that had been in service for the previous quarter century, and when the new uniforms entered service the final colours were a little less verdant than those used for the trials.

Although not immediately obvious, the three colour Danish M/84 pattern is a direct derivative of the German five-colour Flecktarnmuster or Flecktarn pattern developed in the mid-1970s. All the Danes did with their pattern was:-

My images of Danish troops wearing M/84 pattern date from 2002, more than a decade before I properly started taking four-view sequences of the same soldier to illustrate camo articles, and at the time I did not think to photograph a combat shirt back panel for reference. The original images were also taken on an early digital ‘bridge’ camera at just 1800×1200 pixels, so are too small to crop in to see detail. Fortunately, however, I have a small fabric swatch dating from around the same time which has mostly been stored in the dark and I photographed this in bright shade for this article.

Again I am using X11 web colour names to try to give a degree of consistency when describing camo shades. In my opinion the base shade for M/84 is closest to LightGreen (#90EE90) and the second colour is close to DarkOliveGreen (#556B2F) with the third colour, which gives a little depth, being plain Black (#000000). It is worth noting, however, that the black invariably faded with washing and prolonged exposure to bright sunlight. Overall this camo is green with no browns whatsoever, meaning it is not very good in autumn or in more arid environments, so around the turn of the new millennium a desert colour variation was introduced for Danish troops on UN missions in Africa and this pattern was issued for Afghanistan too (see foot of page).

M/84 Kampuniform pattern was replaced by a new Danish MultiCam uniform, M/11 Multiterrænsløring, around 2013 and I plan to look at this next before turning my focus northwards to Norway.

Camo, Camouflage, Danish, Featured, Kit and Camo, M84 Kampuniforn
You may also like