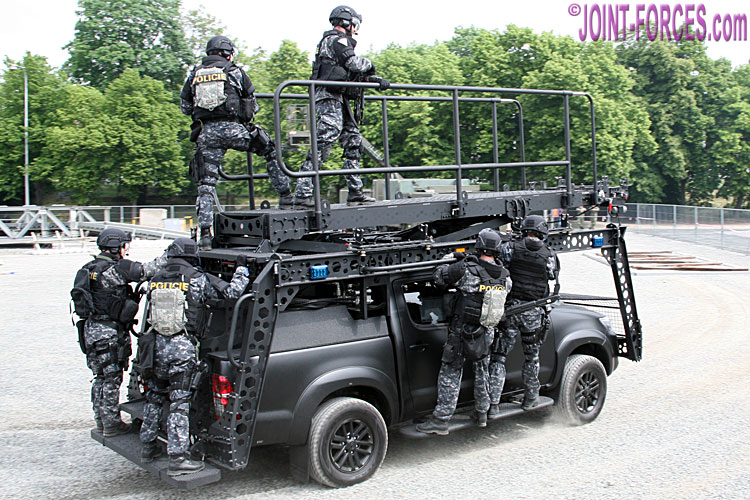 Brno Rapid Response Unit of the Czech Police, May 2015 [©BM]

For this brief article I am staying with the blue-grey uniforms theme to cover the pattern worn by the Brno Rapid Response Unit of the Czech Police, writes Bob Morrison.

Czechia, until quite recently known as the Czech Republic, has a national Counter-Terrorist force known as URNA but in addition there are also eight highly trained regional police rapid response units with shorter reaction times for dealing with local situations. At the IDET 2015 defence expo, held at the Central European Exhibition Centre in the nation’s second city of Brno, the local police Rapid Response Unit mounted dynamic displays in the outside arena to demonstrate their capabilities; cover in this separate feature.

These well-equipped armed police officers, usually referred to as Brno SWAT, wore digital urban camouflage uniforms, black load-carrying vests with body armour and ballistic plates plus latest generation Batlskin Viper ballistic combat helmets with full eyepro. This team was the city’s, and the South Moravia region’s, immediate notice responders to firearms incidents and they were also tasked with attempting to either rapidly resolve of contain terrorist situations in their municipality.

This urban camouflage pattern worn by the Brno Rapid Response Unit, under certain lighting conditions and when captured on digital camera, can appear to be more blue than grey resulting in confusion when commentators only have photographs rather than samples to refer to. This is the same phenomenon mentioned in my coverage of the blue-grey variant of DPM (Disruptive Pattern Material) camouflage used by UK OpFor troops on exercise on Salisbury Plain which coincidentally I had photographed just a couple of months before. However unlike the older-style British DPM camo, the Czech scheme was a four-colour digital or pixellated pattern, and of course it was worn by a police counter-terrorist squad rather than by soldiers.

In many ways the pattern worn by the Brno SWAT team was quite similar to the US Navy four-colour digital camo introduced from 2007 for its Navy Working Uniform and also to some extent the US Army’s three-colour Universal Camouflage Pattern (UCP). However having closely examined both the Czech Police and US Navy patterns, and photographed the two outdoors with the same camera settings in reasonably similar bright overcast outdoor lighting conditions just a few weeks apart, I feel confident in saying that the two darkest shades used are charcoal and dark / slate grey for the Police pattern and black and dark blue for the Navy pattern.

The base colour for both Czech and US patterns is a stone shade, which takes on a pinkish hue in some lighting conditions, and the next lightest shade for both camouflages is what I would call a battleship grey. Logically, the US Navy opted for a very definite blue-grey overall scheme for the maritime environment whereas the Czechs opted for a more urban grey theme, but the latter can appear to take on a bluish cast when the wearer is in the shadows, under street lights or in winter sunlight. The US Navy uses black, a colour which seldom occurs in nature, as its fourth shade mostly because NWU is worn aboard ships where oil and grease staining is not uncommon, but the Czech Police camo uses a very dark, charcoal-like, shade instead as these three grey colours on a light base are considered by many to be the best combination for urban operations where transitioning from daylight to shade to near darkness is not uncommon.

The kit worn over their camo uniforms by this elite Czech Police squad included the Revision Batlskin Viper P2 Full Cut helmet with side rails, front mount, wrap around visor and custom made helmet cover and behind the face protection visor Revision Sawfly MAX-Wrap spectacles were also worn. The black body armour vest had PALS tapes for attaching magazine etc. pouches , and pistol holster, and there was a groin protection plate beneath. Badges worn on the upper right arm by many of the SWAT team were the low visibility ‘glint’ version of the Czech national flag beneath which was the Brno Dragon with the wording ZÁSAHOVÁ JEDNOTKA (RESPONSE UNIT) above it. On his feet this operator had HAIX Ranger GSG9-S boots. He was armed with a Heckler & Koch 4.6x30mm MP7A1 Personal Defence Weapon.

The next article in this section will revert to green, most likely covering Czech vz.95 ‘Leaf’ pattern as worn by troops in the Czech Airborne CAIMAN D130 Land Rover feature.