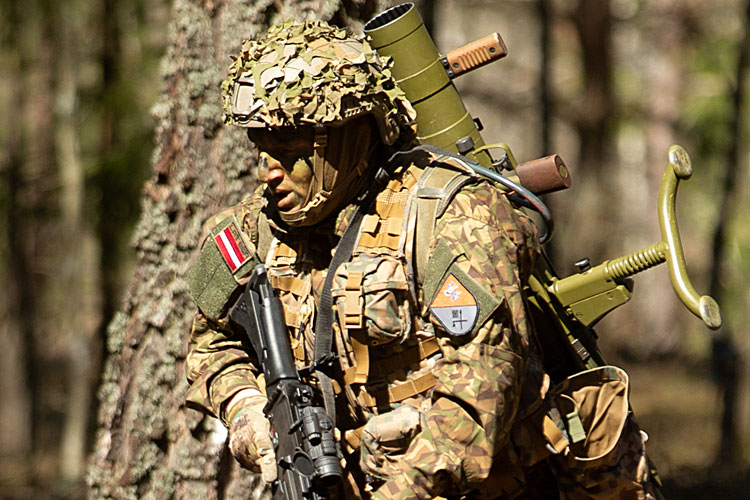 Following the visit to the Meža Mackeviči Training Area, near the southern city of Daugavpils, by Minister of Defence Artis Pabriks and Brigadier Egils Leščinskis of the Latvian National Guard, a press release was issued along with images showing soldiers from the 36th Combat Support Battalion of the 3rd ‘Latgale’ Brigade wearing uniforms in the new camo while participating in a tactical demo.

A replacement for the current four-colour M07 LatPat and its five-colour M16 Multi-LatPat derivative, the new angular WoodLatPat (Woodland Latvian Pattern) camo is probably best described as being Splinter-type, whereas the earlier pair of patterns could be described as Digital-type; albeit with square ‘pixels’ which are several times larger than those found on other digital / pixellated patterns. Incidentally the terms LatPat, Multi-LatPat and WoodLatPat are all used in a formal Latvian MoD document dated 1st November 2019 titled (translated) ‘Soldier Uniforms, Their Components And Additional Elements‘ so from now on this is the designations I will use to differentiate between the types. [I plan to cover LatPat and Multi-LatPat in the next two articles in this section.]

It is always difficult to describe camo pattern colours without having inspected the fabric oneself, but as the images taken last Wednesday by Latvian MoD photographer Gatis Dieziš have been made available at high resolution and as several were captured out in the open in very bright sunlight, plus of course the uniforms themselves are very new, this task is a little easier than usual. Although the original diagrams issued with the 2018 tender documents appear to show ten different colours, and not the same ones as finally chosen, I suspect that in the end only five were actually used. At first glance it appears that there are only four colours, but close inspection reveals that there are actually two variations of the lightest colour. Even closer inspection reveals the initials NBS (for Nacionālie Bruņotie Spēki or National Armed Forces) incorporated in the design.

A Splinter-type pattern, in some ways reminiscent of Swedish M90 but with much smaller shapes, WoodLatPat is straight-edged and angular, though interestingly the green shade sometimes feathers into the lightest shade to slightly soften the otherwise sharp appearance and it also appears that there is some feathering of the darker of the brown shades; I really wish I had a decent size swatch of this fabric to examine. Some of the dark colour shapes are very thin, creating fake shadows, and this serves to fool the eye into believing there may be depth to the object being viewed rather than it all being in the one plane. Although apparent in the photos, whether or not this works in the field to break up the usually easily recognisable shape of a human being will only be confirmed by actual observation in realistic conditions.

In the past when attempting to describe camouflage colours I had to do so for viewers looking at images in print – not exactly ideal as the last print magazine sheets off the rollers after several thousand had been printed were never the same shade as the first – but with us now all viewing on the t’internet I am going to try quoting X11 web colour HTML names in an attempt to be a bit more accurate and consistent. Using a close-in crop of one of the images, concentrating on the left thigh pocket area which is brightly lit, I reckon the five basic WoodLatPat colours could be: Wheat, Tan, Peru, SaddleBrown and OliveDrab. Of course that is just how my eye and brain interpret the colours, and you might think different, plus it is possible that light temperature and background colour reflections on the day could have skewed things. At the risk of repeating myself, I wish I had a fabric swatch to examine under conditions over which I had some control.

One final point. The camo pattern load vests worn in these images, and attached pouches, are Multi-LatPat not WoodLatPat but the two appear to be reasonably compatible. It would have been useful to have been out in Latvia around now for the STEELE BRAWLER 20 and NOBLE JUMP / DEF20 exercises, but as that pesky pandemic closed Latvia’s borders to foreign nationals and suspended international flights into Riga on 17th March, it just wasn’t going to happen.