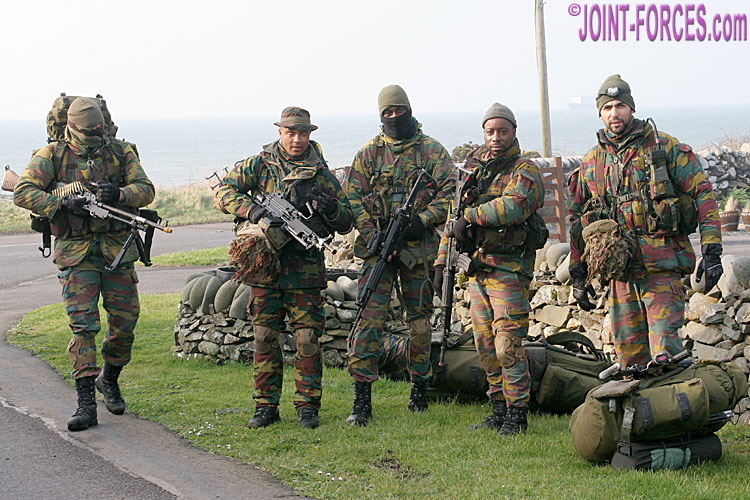 The current Belgian M1999 Jigsaw camouflage is the third evolution of a successful, originally Elite Forces, camo pattern which originated in the mid-1950s, writes Bob Morrison.

For this Kit & Camo feature I am first looking back at a Commando serving with Belgium’s elite Immediate Reaction Cell, the successors to the Para-Commando Regiment, photographed in Scotland in 2014 before coming a bit more up to date with a look at members of the Belgian Contingent serving with the British-led NATO eFP (enhanced Forward Presence) battle group in Estonia in May 2019.

Almost universally known as Belgian Jigsaw Pattern, because the original M1956 design conveyed the impression of interlocking jigsaw pieces, uniforms in this camouflage design were originally only issued to elite formations, including the Para-Commandos. Revised slightly in the 1970s, essentially by being stretched horizontally, in 1999 the design was tweaked again by being compressed vertically though the basic colours remained broadly unchanged through each evolution.

This Belgian Commando, who has now put on his distinctive green commando beret, is wearing an issue combat smock, trousers and (Arktis) chest rig in the M1999 version of Belgian Jigsaw pattern. It consists of drab khaki green, bottle green and reddish brown in almost identical proportions with coal black as the fourth colour in lesser proportion. Although it may look like some of the colours have been printed out of register, as thin slivers of white can be seen at the edges, this is actually intentional use of a light edging to attempt confuse the eye by introducing three-dimensionality to a two-dimensional pattern.

I have previously gone on record as saying that I have photographed Belgian Paras and Commandos on exercises over many years, from Scandinavia and the Baltic down to the Iberian Peninsula, and I have never considered Belgian Jigsaw pattern to look particularly effective in photographs against any rural or urban backdrop. However the eye often sees things very differently from the camera lens and out in the field the 3D effect of Belgian Jigsaw comes into its own at infantry engagement distances of around a few hundred metres and troops wearing this camo begin to blend in much better against foliage backdrops.

Last May I had the opportunity of watching and photographing a Belgian company group, composed of the Bataillon de Chasseurs Ardennais plus Engineer and Logistic support, at different locations in Ida-Viru County in Eastern Estonia during the final stage of the KEVADTORM 19 field exercises involving two NATO eFP battlegroups in addition to Estonian Forces. In the above four photos the colours of their Belgian M1999 Jigsaw pattern uniforms might look like they do not blend too well with the Baltic spring vegetation, but in fact when the troops went to ground they were quite hard to see and when they were cautiously advancing through the forest they were difficult to spot until they were quite close. Who was it who said the camera never lies?

For our badge aficionado viewers, the above two patches worn by the Belgian Contingent in Estonia in 2019 are the official NATO eFP (enhanced Forward Presence – note the lower case first letter) Battle Group shield and the unofficial Chasseurs Ardennais tour patch incorporating British, Belgian and Estonian flags plus the English translation of their motto – Résiste et Mords! – above their wild boar’s head emblem and the NATO star.

Belgian, Belgian Jigsaw, Featured, Kit and Camo, M1999 Jigsaw
You may also like