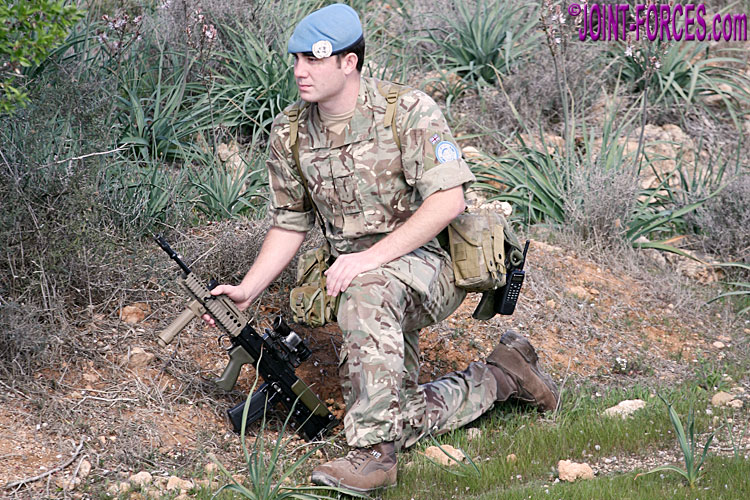 A British UNFICYP 'Blue Beret' from the MFR on the Green Line, Cyprus 2014 [©BM]

In this fifth and final part of the mini-series focusing on camouflage uniforms worn by those serving with the United Nations at the time of the 50th birthday of UNFICYP I look back at what two soldiers, one serving with the Mobile Force Reserve and the other on a patrol on the Green Line near Nicosia / Lefkoşa, were wearing.

The British Contingent, or BRITCON, deployed on UN duties under what UK MoD calls Operation TOSCA wear uniforms in the standard British Multi-Terrain Pattern or MTP camouflage. Introduced in 2010 as an Urgent Operational Requirement, or UOR, MTP is a licensed derivative of Crye Precision’s patented MultiCam pattern and was introduced specifically for active operations in Afghanistan’s southern Helmand Province where conditions varied from arid desert to verdant sub-tropical in the ‘green zone’ around the Helmand River. However this unique blend of MultiCam and Disruptive Pattern Material, now worn as standard, proved to be very effective in most other environments and it certainly works well in the Cypriot countryside as well as not being too out of place in the urban and semi-rural surrounding of Sector 2 of the UN Buffer Zone through Nicosia and its suburbs.

The primary photographs on this page are of a lance corporal from the 3rd Battalion of the Princess of Wales Royal Regiment, the ‘Tigers’, serving with the multinational Mobile Force Reserve. A Reservist Light Infantry battalion, 3PWRR recruits predominantly from London and South-east England south of the Thames. On the NCO’s upper right sleeve he wore the yellow on blue tiger badge, inherited from the former Royal Hampshire Regiment, above the white on UN blue MFR patch. On the upper left arm he wore the white on blue circular UN globe emblem above which is the Union Flag. As a member of the MFR this ‘Tiger’ patrolled the Buffer Zone in belt order and armed with an SA80A2 to which a SUSAT, down-grip and polymer P-MAG were fitted.

The second British peacekeeper, seen below, was a Royal Engineers diver serving in Sector 2 who wore the SW (Shallow Water) trade patch beneath the maroon and navy blue tactical recognition flash of his corps; his left upper sleeve badging was identical to that of his colleague serving with the MFR. The sapper diver patrolled his sector unarmed, as tensions were low, on foot carrying a daysack and not wearing webbing; while out in the Buffer Zone on foot he or a colleague would also display a UN flag on their daysack. Both soldiers sported the UN blue beret with gold and white UN cap badge and wore their combat shirts outside their trousers, unbuttoned at the neck and collar pressed flat.

Operation TOSCA is the British Army’s longest running operational deployment and at the time of my 2014 visit to the Green Line the BRITCON complement tasked to Sector 2 numbered 183 at full strength; the British Army MFR contribution was also part of Op TOSCA but was operationally separate from the Sector 2 contingent. In the spring of 2014 the bulk of BRITCON was provided by 28 Engineer Regiment RE, who were officially undertaking their last operational deployment because their formation was a victim of both down-sizing of the British Army and the phased return of standing UK Forces from Germany.