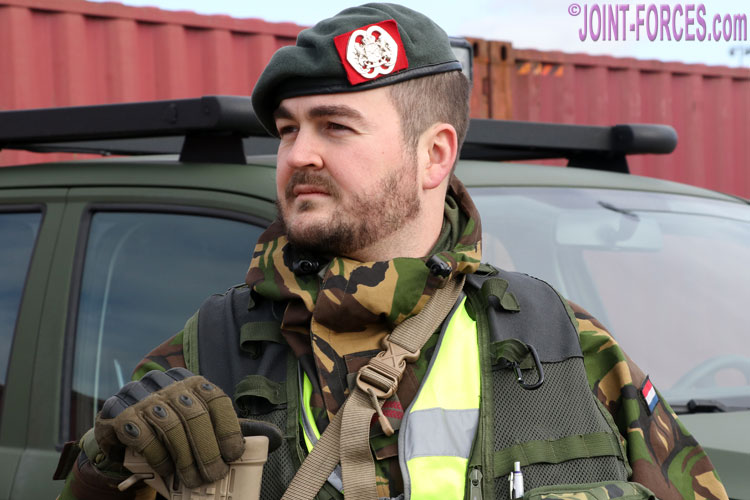 No doubt the vast majority of readers will be very familiar with British DPM, even though it was widely replaced from 2010 by the MultiCam-derived Multi-Terrain Pattern, so little description is probably required here. However it should be noted that although the patterns of both the British and Dutch DPM camo fabric are very similar indeed, the actual shades are slightly different and there is less ‘spatter’ on the Dutch edges. To the eye, the lightest Dutch colour is often more mustard than tan, the Dutch green colour can appear a little less verdant, and the brown colour appears a little warmer and more faded. Of course once garments become dusty and faded through washing or exposure to bright sunlight, these differences are not quite as obvious as when comparing new with new.

The Dutch NCO who agreed to pose for this feature is a Lance Corporal from 30 Natresbataljon of the Korps Nationale Reserve, which is a component of 13 Light Brigade (13 Lichte Brigade) and part of the Active Reserve. I must confess that I forgot to ask precisely which unit he served with, but as Vlissingen Docks falls well within the Alphacompagnie AoR (Area of Responsibility) it is a fair bet that this is who he and his Reservist colleagues serve. Since 2013, when they lost their Mechanised Infantry Fighting Vehicles as part of the restructuring of the Dutch Army, his Brigade is tasked in the Light Infantry role.

Formed on 4th August 1914, one week after the outbreak of World war One, the volunteer Korps Nationale Reserve is currently 3,000 strong and headed by a Lieutenant Colonel. Its primary roles are Surveillance and Security. Towards the end of the third week of March 2020, as the Netherlands continued to shut down in response to the Corona Virus pandemic , Reservists were mobilised to provide Military Assistance to the Civil Authorities (MACA).

On the afternoon of Saturday 21st March Lt. Col. Hans Berding, the Natres Commander, told his troops: “The impact of COVID-19 on society is increasing. Defence has already taken several concrete steps and currently more preparations are being made and Defence is ready with men and power.

“At the moment, Reservists are already being deployed in the security regions and in other locations. Other reserve units are also preparing for a possible commitment, if requested in the current situation. Every military, including the Reservist, should take into account an (alternative) commitment.”