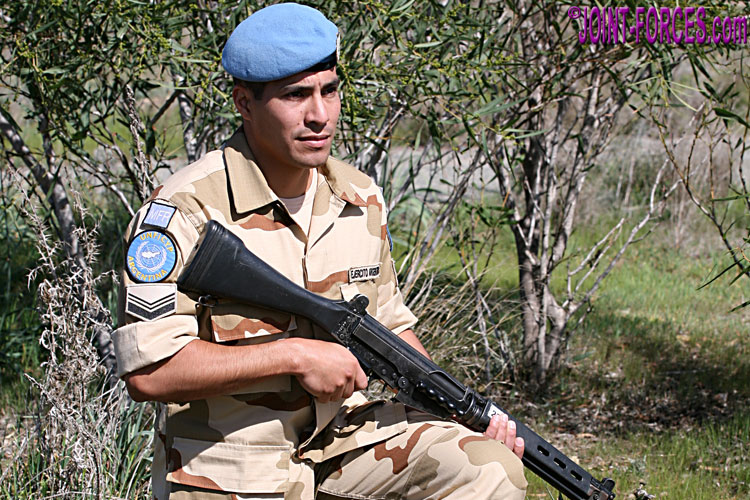 The soldier seen here is an Argentinian member of the the United Nations Mobile Force Reserve in Cyprus wearing a version of US 3-colour Coffee Stain Camo, writes Bob Morrison.

While on assignment on Cyprus in 2014 to cover the main contingents serving with UNFICYP (the United Nations Force In Cyprus) on its 50th Birthday, I had a minor brainwave and decided to photograph the camouflage uniform worn by each of the nationalities I worked with out on the Green Line.

My trip started with a visit to the multinational MFR (Mobile Force Reserve) based at Airport Camp in the United Nations Buffer Zone, which is usually referred to as the Green Line as the original demarcation line established in 1963 and extended to 180 kilometres long in 1974 was drawn on a British military map with a green chinagraph pencil. While out on patrol with an MFR team, drawn from the different nationalities contributing units to patrol the sectors of the buffer zone across Aphrodite’s divided island, it suddenly struck me that I should really document the camouflage uniforms of each soldier for future reference; little did I realise at the time how popular these short articles with four-view images would turn out to be or how many sets I would subsequently snap over the next few years.

What was intended just to be a mini-series on UNFICYP uniforms, for the now gone COMBAT & SURVIVAL Magazine, commenced with an Argentinian Cavalry Master Corporal from 2 Section of 2 Platoon of the multinational Mobile Force Reserve, who wore the Argentinian-produced version of US three-colour ‘coffee stain’ desert camouflage. His uniform, consisting of a lightweight combat shirt worn over a stone T-shirt and camo combat trousers, was tailored in the style of US BDU (Battle Dress Uniform) and he wore the standard United Nations blue beret; ballistic helmets with UN blue covers were carried in the vehicles. His weapon was the 7.62mm FN FAL, but no magazine was fitted as the Argentinian UN contingent was in the throes of the annual handover, the Relief In Place, at the time of my visit and magazines and ammo were being accounted for. His nine-eyelet high leg combat boots were of Argentinian manufacture, with tan leather and nylon uppers, and trousers were worn tucked inside.

The shirt, which was manufactured from ripstop polycotton, had four pockets on the front and all were bellowed down both edges. Sleeves were worn rolled up, the top button was undone with the collar pressed flat, and there was a button and tab adjuster each side at the waist. Name and EJERCITO ARGENTINO tapes were worn over right and left pockets respectively and rank patches were worn on both arms. Trousers were also BDU style, with large pleated and bellowed cargo pockets on each outer thigh. Belt order was not worn as the Argentinian Contingent (ARGCON) personal kit was also subject to a stock check at their main base because of the imminent RIP.

The three-colour ‘coffee-stain’ pattern, developed as a desert camouflage in the late 1980s by the US Army as a replacement for the six-colour ‘choc chip’ pattern, consists of large rounded blobs in a sandy earthen shade on a light stone background with thin reddish brown wavy shapes as the tertiary colour. Primarily intended for desert or arid theatres, this camo does not work particularly well in Cyprus in spring, where the background is quite verdant for much of the season. However in summer and autumn, when much of the Cypriot landscape turns to a universal cappuccino shade, as one of the Slovakian Contingent officers succinctly described it, this camo is quite well-suited and is much more appropriate than the four-colour US Woodland camo which ARGCON was wearing when I first photographed them back in 1999 on my second Green Light assignment.

Above: The M/Cpl stripes were the desert version with black and light khaki stitching on a light stone background, the MFR patch initials were in very light blue stitching on a black bordered light sky blue backing, the UN patches were in azure blue with mostly white stitching, though UNFICYP and ARGENTINA were in deep yellow, and the national flag was light blue and white with a golden sun over a black bordered ARGENTINA in black stitching.

At the time of my 2014 visit a total of 33 Argentinian military personnel, two officers and 31 from the ranks, served with the UNFICYP Mobile Force Reserve, with fifteen of their number forming the APC Platoon. The remainder, excluding the MFR second-in-command, served with the Rifle Platoons as riflemen though all were actually NCO volunteers broadening their career CV. I plan to look at the Glover Webb TACTICA armoured personnel carriers used by the UNFICYP MFR in a future feature.