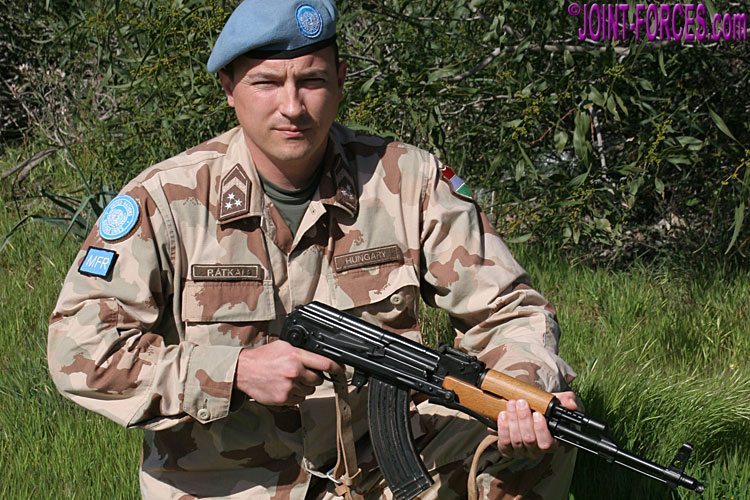 These Hungarian soldiers wearing 2004M Desert Camo uniforms were members of the the United Nations Force In Cyprus or UNFICYP in 2014, writes Bob Morrison.

In this third part of the mini-series focusing on camouflage uniforms worn by members of the United Nations serving with UNFICYP at the time of the 50th birthday of the mission I look back at two members of the Hungarian Contingent, or HUNCON, which served with the Sector 4 formation in the Cypriot Buffer Zone.

In March 1990, following free elections, the previously Soviet-dominated and Warsaw Pact affiliated Hungarian People’s Republic transformed into the democratic Hungarian Republic and around the same time the present Hungarian Defence Force (Magyar Honvédség) was formed. From the outset, the HDF decided to implement a new national camouflage and by 1994 they had introduced a four-colour (brown, green and black on stone) woodland-type pattern along the lines of some NATO patterns of the day; the rounded shapes of this camo had spattered trailing edges similar to British DPM (Disruptive Pattern Material). This 1990M pattern was the current standard Hungarian uniform camouflage in 2014 but it has now been replaced by a new MultiCam derivative which I have not yet been able to photograph in the field.

The Hungarian four-colour Desert pattern, usually referred to as 2004M, was a derivative of the 1990M woodland pattern (introduced c. 1994) which used the same shapes but the lightest colour was now a pinkish sand shade rather than light stone. The four original Woodland pattern colours, by approximate area, were: 1~ Russet Brown; 2~ Olive Green; 3~ Light Stone; 4~ Black. For the new 2004 Desert camo these now became: 1~ Sand; 2~ Khaki; 3~ Rosy Brown; 4~ Russet Brown. It is possibly worth mentioning that there is not a lot of variation between the Sand and Rosy Brown shades and in very bright light it can sometimes appear that only three colours are used. In addition to being the standard uniform camo pattern issued to Blue Beret troops serving in Cyprus, Lebanon and Western Sahara, 2004M was also worn by the roughly 100-strong Hungarian contingent serving with ISAF in Afghanistan.

The Master Sergeant seen above was tasked to UNFICYP’s multinational Mobile Force Reserve so he was armed; his weapon was the Hungarian folding stock AK-63D variant of the Soviet 7.62mm AK-47 assault rifle. His 2004M desert camouflage uniform did not blend in well with the temporarily verdant Cypriot background in the short spring season, but green foliage is quite short-lived on the island and from summer through to late winter these arid shades were actually just about right against what one Blue Beret described to me as Cappuccino Cyprus. Note that the NCO’s name tapes and rank patches were in tactical brown and tan and he wore tan coloured desert boots

On his right upper arm the Hungarian Master Sergeant wore the circular white on light blue UNITED NATIONS / NATIONS UNIES badge consisting of the titles above and below the UN Globe emblem and below this he wore the MFR badge. On his upper left arm he wore his national flag colours, of red over white over green, on a shield shaped badge with brown and tan edging and piping.

Above: UN Peacekeepers on routine Presence and Reassurance Patrol in the Buffer Zone are unarmed [©BM]

In 2014 the 202-strong Blue Beret force responsible for the eastern, 95 kilometre long, Sector 4 of the Buffer Zone between Turkish and Greek Cypriot front lines was led by Slovakia but also had sizeable Hungarian and Serbian contingents. One platoon provided by the 57-strong Hungarian Contingent, HUNCON, was headquartered in Athienou and had responsibility for the western half of the Sector There were also two Croatian and two Ukrainian military personnel serving in Sector 4, but the latter were on scheduled leave at the time of my visit.

While out with a Slovakian vehicle patrol which was flying the flag through a 30 kilometre stretch of the Buffer Zone we met up with Hungarian and Serbian Blue Beret patrols liaising at the boundary of their individual areas of responsibility. In 2014, except in times of increased tension, a normal Presence and Reassurance Patrol consisted of two unarmed soldiers travelling in a 4×4 to ensure the comparatively small UN force covered as much ground as possible; to bolster the teams out on the ground Argentinian Air Contingent helicopters in UN markings regularly flew random observation or reinforcing patrols along the line.

In the next article I plan to look at M-MDU-10 Digital Woodland pattern worn by Serbian Blue Berets on the UNFICYP Green Line in 2014.