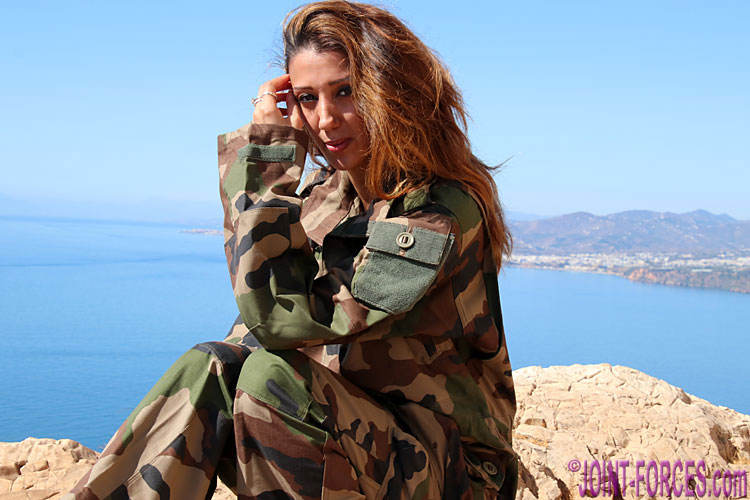 A few months after the 28th September 2018 contract award notice, in favour of two Bulgarian, one Belgian and two French suppliers who received equal shares, the new combat uniforms went on general issue to French troops, with those serving on Operation BARKHANE in Africa being supplied first, and by the summer of this year (2019) warehouse stocks of the earlier uniforms became available through the surplus trade.

The basic combat uniform featured on these pages is assembled from a Veste De Combat and Pantalon De Combat taken from a large unissued surplus uniform batch procured by our mates at Essex-based East-West Trading. The veste (jacket) was manufactured by KARO–06 EOOD of Jaltusha, near Kardzali, and the pantalon (trousers) were made by Transconfection EOOD of Kazanlak; both of these manufacturing facilities are in Bulgaria, have tailored French military uniforms for several years, and are also contracted for the new M2019 combat uniforms purchase. We have not yet been able to lay our hands on these new French Army combat garments, the third major evolution produced since the introduction of the Central European camo pattern in the early 1990s, but hopefully we will get a good look at some at Eurosatory 2020 in June if we do not get the chance to work with French troops before this.

Turning first to the camouflage pattern, officially designated Centre Europe or Central European and abbreviated as CE, this is a four-colour camo first seen in use by specialist units in 1989, mostly for inclement weather over-garments, which was formally approved for general service in 1991 though it did not widely appear in the field with the mainstream army units until 1994. In some ways similar in colour to US Army M81 Woodland pattern, in that it uses russet brown and verdant green secondary colours plus tertiary black on a light tan base, when garments are new the French secondary shades are much brighter than their American equivalents. The French pattern also has markedly larger shapes, which predominantly run horizontally, than its US equivalent. For our photoshoot Ramilla was wearing the borrowed jacket and trousers on a very sunny day in Southern Spain in October, so the colours are inevitably a bit punchier than they would be if shot on a NATO eFP (enhanced Forward Presence) mission on a misty day in the Baltic Region, but even the studio-shot detail images taken under flash conditions look much more punchy than US M81 Woodland pattern.

The temperate zone combat jacket, Veste De Combat in French, is shirt-like in design and worn over the trousers with usually a T-shirt or fleece shirt underneath dependent of temperature. Manufactured from a heavyweight rip stop material (3C) it has a full-length double action front zip behind a weather baffle which is secured by hook and loop fasteners (i.e. Velcro-like) and a mandarin collar which can be pressed and worn open at the top; the previous model had a conventional collar but a mandarin (i.e. standing) collar is more comfortable when wearing a body armour load vest. There are no buttons to the front flap but in warm weather the jacket can be worn unzipped and fastened solely by the hook & loop patches. Drawcords with nylon spring toggles can be used to draw in the waist and hem and the sleeves have hook & loop fasteners; the earlier model Veste De Combat in CE pattern had press studs. There is a large bellowed cargo pocket on the lower front at each side with a simple cover flap fastened with two taped buttons and there is a small field dressing or tourniquet pocket at the top of each arm, fastened by a single taped button; the earlier jacket design had no arm pockets. On each outer side of the chest there is a slightly slanted zipped vertical pocket which can be accessed when wearing a load vest; zips on the earlier style were vertical and closer to the centre of the chest and so could not be easily accessed if a load vest was worn. There are two simple button-down epaulettes, a square of loop material on the centre of the chest for attaching rank, a loop tape high on the right breast for a name tag, and loop material on both upper sleeve pockets for tactical and national insignia patches. The jacket has no internal pockets.

The temperate zone trousers, or Pantalon De Combat, made from the same ripstop material as the jacket, have a zip fly and single button at the waistband. The waist can be drawn in with an elasticated belt, running in a fabric tunnel, which has hook & loop fasteners at each side. Six heavy duty nylon loops are stitched around the waist to accept a trouser belt. Hems are drawn in by simple drawcords but it is not unusual to see soldiers wearing elasticated grousers instead or just removing drawcords and wearing the hems loose over the boots. These trousers have a conventional slant pocket at each side but no hip pockets. There is a large bellowed cargo pocket on each thigh, with two taped buttons to their cover flaps, but no lower leg pockets. The seat and the knees are reinforced with a double thickness of material.

If interested in buying any of these French combat uniforms, most of which appear prom the paperwork to have come from establishments in the Occitanie region, contact East-West Trading who supplied our samples.