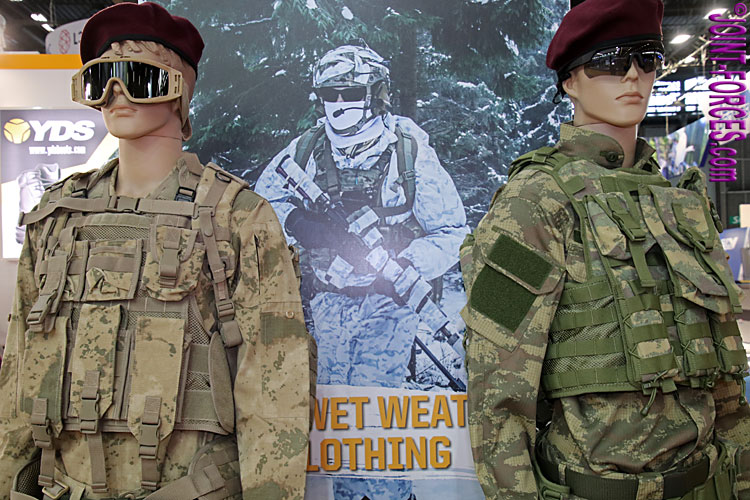 In the UK the Turkish manufacturer YDS is primarily known for their footwear, as they own the GOLIATH brand, but they also produce camouflage garments, writes Bob Morrison.

At most of the main defence expos YDS (Yakupoğlu Deri Sanayi) predominantly features their YDS Footwear manufacturing division but at the recent MiliPol Paris security expo they also exhibited camouflage garments produced by their YDS Textile division; incidentally they also make tents, load carriage equipment and body armour etc. for the Turkish Armed Forces and for other nations’ militaries.

In addition to garments in the two primary Turkish camo patterns, M2008 Turkish Armed Forces (Türk Silahlı Kuvvetleri) and the more arid M2018 Jandarma, YDS also exhibited jackets in both the M2012 Kosovo Security Force (Forca e Sigurisë së Kosovës) digital pattern and the M2009 Armed Forces of Montenegro (Vojska Crne Gore) variation of MultiCam. Both of the latter patterns incorporate a small motif in the form of the shape of the respective nation and the VCG pattern also carries these initials alongside. The M2012 Kosovo pattern is three colour, of predominantly dusty green and earth shades, and while from a distance it bears a passing resemblance to Turkish patterns, up close it is very different. The main Turkish Armed Forces camo is produced in two versions, one with fine grid like that found on a school exercise jotter overprinted and one without, but from a distance both are quite similar to the eye and stand out when compared with M2018 Jandarma.

Please bear in mind that the colours of photos taken at MiliPol, even though I have done my best to correct them, are not accurate representations due to the wide mix and levels of indoor lighting found in exhibition halls. Outdoor shots of the Turkish uniforms were taken in bright sunshine and should be more accurate.