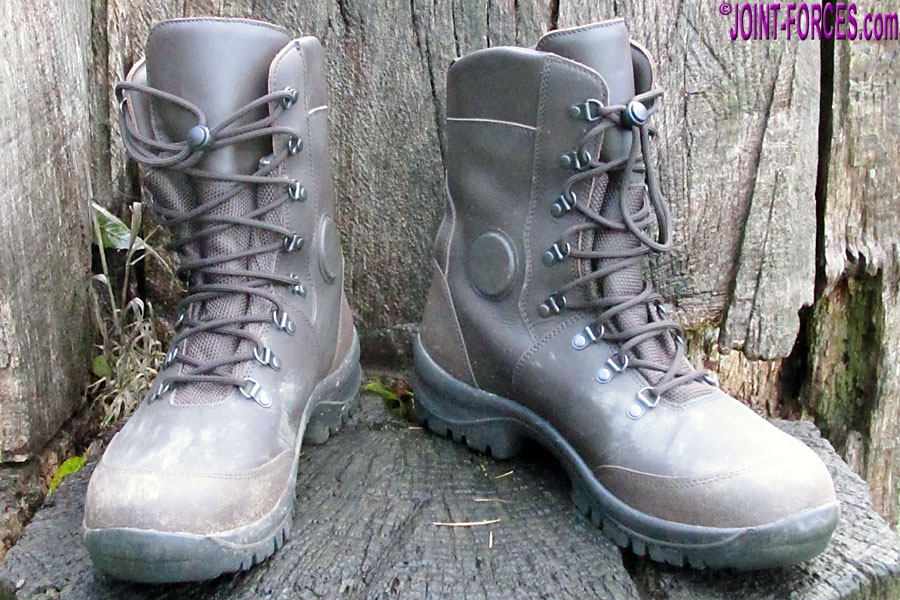 Now that the weather has turned I have had plenty of opportunities to try the SAMELIN All-Seasons Military Service (ASMS) Combat Boot, writes Bob Morrison.

Little did I realise back in May, when I first donned these combat boots from Estonia, that we would have the best summer in the UK since that memorable year of 1976; indeed the thermometer actually hit new records this year, and when I briefly updated my original article I was beginning to realise it was likely to be a little while before I had the chance to try them in the cold and wet.

I actually started typing up this page while flying high above Jordan (on a SqueezyJet flight out of Aqaba to save the pennies) after a week in the Middle East and I did not take these boots with me, as that would have been stoopid, but before I departed an autumnal Devon I wore them in the type of conditions they are best suited to. Although I live and work in the heart of a small town I am fortunate in being able to see not one but two Areas of Outstanding Natural Beauty (AONB) from my attic studio windows, and the Jurassic Coast is but a few miles away too, so there is plenty of interesting terrain nearby for me to try out combat boots over.

As you can probably see from the accompanying photos, these boots have not been sitting on the rack all the time since I penned the New SAMELIN All-Seasons Military Service Boot heads-up article almost six months ago. In that original feature I brought you the basic specification and company history, so don’t plan to bore you by repeating the same details. However after having given these boots a decent crack of the whip I have to say that my initial impression that these were good boots has been borne out. While it might not be super-lightweight and of ultra hi-tech construction like some of the currently more fashionable patrol boot models, the Samelin ASMS boot (Model Number 747 119 500) is an honest, traditional leather combat boot designed for wear rather than show. Don’t get me wrong, I love my super-lightweight trainer-like boots as much as the next man, or woman, but there are times when a more traditional fabrication combat boot is a necessity. This Estonian boot is definitely one of these.

If asked to describe this boot to someone unable to see the accompanying pictures I would say that it is a little reminiscent of a classic ALTBERG leather boot with some of the features of the HAIX Nepal Pro, such as the lace pocket and rubber ankle protectors. The ASMS boot is not, however, a copy of either of these popular combat boots but is very much its own design. I have not yet seen retail prices for this Baltic States footwear brand, and the manufacturers have not indicated any intention of launching for private purchase outside of Estonia, but suspect these boots might work out a little cheaper than their British and German equivalents.

My only minor grumble about this boot is the lack of a lace lock at the fourth D-ring position, as when fastening my boots I like to positively lock in the lower lace zone before adjusting the upper zone. However that is just my personal preference and not a complaint. Personally, I prefer a boot like this which uses closed D-rings throughout rather than a mix of open upper hooks and lower closed rings / eyelets, so other than the lack of a positive lock this lacing system gets my vote.

One final point. Usually when I have finished my initial testing, as on medical grounds I need to look after my feet, I swap aftermarket orthopaedic footbeds (usually Svartz) for the supplied insoles but in this instance those supplied as standard by Samelin seem to be rather good so I plan on leaving them in place.