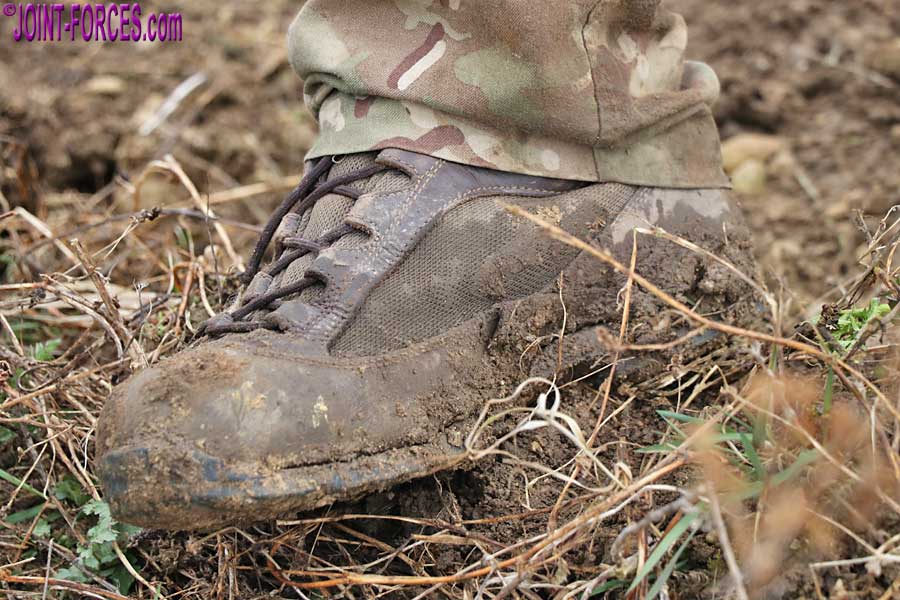 On 24th June 2021 Team Leidos, on behalf of the UK MoD, issued a PIN (Prior Information Notice) for the future Supply of Combat Boots, writes Bob Morrison.

As this post had been attracting much higher reader numbers than the norm we left it at the top of the Home Page for a little longer than usual.

Notification of the current issue UK MoD five-year Supply of Combat Boots contracts (LSL/DC/0001, 0034 & 0035) was dispatched on 1st August 2017 and these are now rapidly drawing to an end, though a ‘plus two year’ option may well be taken up to bridge the gap until the next contract (PIN Ref: LSL/DC/0131) is awarded and new boot types enter the supply system. The estimated date of publication of the next Combat Boots contract notice (i.e. the start of the formal tender process) was originally given as 7th February 2022 with anticipated supply commencement in late 2023 but, as with many UK MoD procurement contracts, the project timeline seems to have slipped quite considerably and at time of writing no notification has yet been published.

Over the last quarter century or so the Combat Boots sector has become one of my three primary areas of speciality ~ the others being Field Rations (hence my waistline) and Military Utility Vehicles ~ and as a result I have penned quite a few articles on the topic and photographed many different footwear types, including the primary UK MoD combat boot models. While we wait for firm news on the start of the next round of boot procurement for UK Forces, now strikes me as an ideal time to look back at the last two five-year contract batches for UK combat boots: DC2B/2606, 2607 & 2608, awarded May / June 2012; and LSL/DC/0001, 0034 & 0035, awarded June / July 2017.

The first of these ‘brown boot’ contracts roughly coincided with the widespread introduction of MTP (Multi-Terrain Pattern) uniform camouflage to replace the long-standing Temperate and Desert variants of DPM (Disruptive Pattern Material) camo, so this makes an ideal break point, but first it probably makes sense to briefly set the scene prior to this. From 2004 through to 2011 all UK Forces footwear across 32 different categories, from Men’s Hot Weather Safety Boots through to Women’s Black Service Shoes and encompassing five categories of Combat or Patrol Boots, was provided by one sole main supplier (Iturri SA) in a £175 million contract but several different manufacturers provided various models through this main contractor.

In the summer of 2012, however, following a series of comparison tests of many different boot makes, three suppliers ~ Iturri of Spain, HAIX of Germany and YDS of Turkey ~ were awarded combat / patrol / jungle boot contracts. HAIX and YDS supplied their own boot models, but those boots supplied by Iturri also included ALTBERG, Magnum and Meindl models. To allow soldiers a choice of fit, and to reduce the percentage of ‘boot chits’ issued for non-standard footwear when only a single fit was available, two different models were issued in each of the five main Categories, though only one type was selected for the low volume sixth Category:-

Although in theory all troops should have been given the opportunity to try on both types of boot in the categories demanded by their role, to allow them to choose the boot which best suited their foot shape, quite a few who I spoke to during the first year or two of issue of the 2012 batch said they were not actually allowed this choice. Reasons for this apparently included demands for formation conformity and uniformity of dress and/or local dictation that only all-leather boots capable of being polished should be worn by some units, especially on the parade ground. (I well remember talking to a regimental recruiting team from a Guards regiment who wearing highly polished Arctic spec Cold Wet Weather boots in a town centre on a baking hot summers day). Some officers also expressed the view to me that in their view it was unrealistic to expect a quartermaster to allow troops to open two boxes and try on two pairs of boots when only one pair would be issued. It was also suggested that holding twice the number of pairs of boots in Stores could both create excessive paperwork and take up too much shelf space when compared with just holding stocks of a single boot model.

Looking towards the second 5-year brown boot procurement, in May 2015 the MoD Defence Clothing team at Abbey Wood issued a Contract Notice announcing “a requirement for the supply of 5 types of combat footwear. It will be tendered as 5 separate lots, 2 choices of boots will be selected for Lots 1 and 2 and 1 choice of boot for Lots 3, 4 and 5. Up to 7 year (configured as an initial 5 year period plus 2 year option) framework agreements could be awarded. The requirement is based on the estimated number of pairs of boots required to support operational deployments and routine maintenance for the UK Armed Forces and entitled civilians.” The Lots and estimated quantities (i.e. number of pairs for the 7 year period based on historical usage) for this requirement, potentially worth £84million excl. VAT, were given as:-:

According to Abbey Wood Contract Notice 2015/S 094-169783, dispatched 12 May 2015: “Suppliers invited to tender may submit up to 4 different pairs of boots per Lot that best meet the performance specifications. All samples submitted at tender stage will be subject to a selection process that includes extensive testing and user trials prior to contract award. The evaluation process is expected to happen in the following stages – Tender Evaluation, User Assessment Panel, Gross Error Trial and finally the Full User Trial. Precise criteria will be detailed in the tender documents. Provided you are successful, at each stage you will be expected to supply following numbers of boots gratis – 2 pairs (1 male, 1 female) for the Tender Evaluation and User Assessment Panel, 12 pairs (mixed male and female) per solution for the Gross Error Trial, between 50 and 150 pairs (mixed male and female) per solution for the Full User Trial.” Even though the potential supplier offering only a single model in a single Lot would have to provide up to 164 free pairs of boots to the MoD for trials, with no guarantee of a contract at the end, we now know that 15 tenders were actually received; in the middle of the last decade winning a UK Forces footwear contract clearly had sufficient kudos to make an expense like this worth the investment.

When Contract Award Notice 2017/S 147-304025, for The Supply of Combat Footwear, was published it was revealed that the total value of the procurement (excluding VAT) was £59,400,000: on 05 June 2017 Iturri SA was awarded a £44.7 million contract for boots in Lots 1, 2, 3, 4 and 5; on 12 June 2017 Aku Italia was awarded an £11.5 million contract for boots in Lot 1 only; and on 17 July 2017 HAIX Schuhe was awarded a £3.2 million contract for boots in Lot 2 only. As 2017 Lot 4, the Jungle Boot, is only issued for tropical deployments and in comparatively small quantities, we have not been able to try or even photograph a pair. However with the exception of the HAIX 2017 Lot 2 DCHL boot, a single sample of which I managed to photograph on the manufacturer’s stand at a defence expo, I have been able to wear review pairs of the rest and my articles can all be found elsewhere in this Footwear section for those who are interested in more detail.

The UK MoD procurement chain, like many other public service departments, has a reputation for sometimes being about as speedy as a sloth on Mogadon ~ the AJAX family of tracked vehicles, which evolved out of an earlier armoured vehicle project aimed at bringing CVR(T) replacements into service by 2010, being their most high profile and costly fiasco at the moment ~ so it is no great surprise that the next Supply of Combat Boots programme is already six months behind schedule. In June 2021 it was stated (in Notice 2021/S 000-014465) that the ‘Estimated Date of Publication of Contract Notice’ was 07 February 2022 but as of 07 August no announcement has been published; incidentally, rumour from those in the know has it that the latest VIRTUS integrated body armour, helmet and load carriage system procurement programme is on the same slow boat as the Combat Boots. As, despite a recent week’s worth of contacting different buck-passing MoD departments, we cannot get a simple answer from civilian Army Communications Officers about the dates of a forthcoming media facility to allow us to schedule coverage, sloth-like procurement department behaviour does not really surprise us.

In June 2021 it was stated the Supply of Combat Boots framework length should not exceed seven years, was anticipated to commence late 2023, and its value was estimated to be between £70 million and £120 million.

Over the last couple of years not only have companies who have previously supplied UK MoD with combat boots ~ such as ALTBERG, HAIX, and LOWA ~ introduced new models incorporating the latests technology and materials, but other NATO nation boot manufacturers like Samelin from Estonia are raising their profile with new boot models aimed at wider markets. It will be interesting to see not only who tenders for the next UK MoD boot contract when documents are eventually published, but also which boots are short-listed for evaluation and eventually selected.