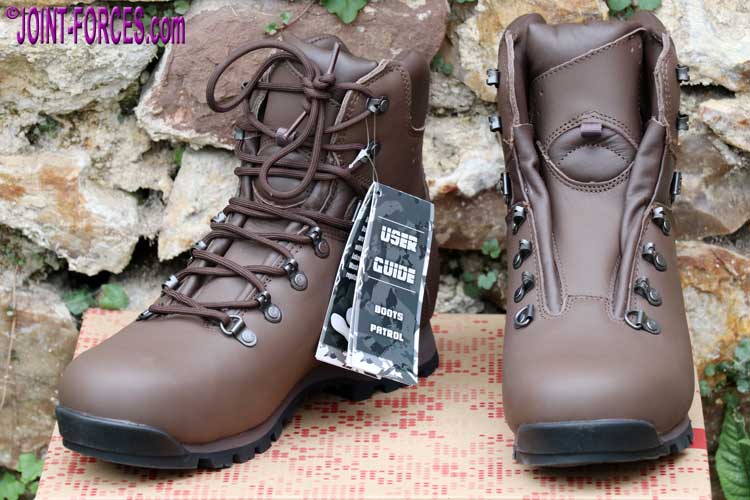 Iturri Boots Patrol, atop and fresh out of the box [© BM]

Patrol Boot is one of five categories of combat boots ordered by UK MoD in June 2017 as part of an initial five year procurement estimated at close to £60 million, writes Bob Morrison.

Three of the five boots being supplied by ITURRI are their own designs and are clearly branded with the company name, another boot supplied by them (in the most numerous category) is the ALTBERG Defender Mk.2, and the fifth is a proprietary Jungle Boot. The latter is currently required in such low qualities that it would have been uneconomic for ITURRI to manufacture their own boot to the UK MoD specification and as the Yorkshire-designed Defender has such a good reputation with both UK Forces and other NATO nations it made sense for the Spanish giant to supply this boot (as they did with the Mk.1 in 2012) rather than go to the expense of creating a competitor boot meeting the UK Combat High Liability requirements which might not win the heavily-contested contract in which over three dozen companies from across Europe and America originally expressed interest.

By way of background, almost four years ago to the day, on 16th May 2015, the Defence Clothing team at MoD Abbey Wood announced a requirement for an estimated 772,000 pairs of combat boots to be supplied over a five to seven year period. The breakdown of numbers was: Lot 1, Combat High Liability – 300,000 pairs; Lot 2, Desert Combat High Liability – 90,000 pairs; Lot 3, Cold Wet Weather – 150,000 pairs; Lot 4, Jungle – 42,000 pairs; and Lot 5, Patrol – 190,000 pairs. AKU and HAIX were chosen as the second suppliers in Lots 1 and 2 respectively, to give troops in roles where combat is/was a high possibility a choice of fit. Expanding on this, each manufacturer lasts their boots differently and allowing choice of fit reduces potential foot problems quite markedly, though given the wearer a choice is not always popular with some Stores personnel if the rumour mill is to be believed.

The ITURRI Patrol Boot is the third of the company’s own brand UK MoD 2017 contract boots that I have tried out – the others being Desert Combat High Liability and Cold Wet Weather – and I recently took my pair out to the Yakima Training Center in Northwest USA to see what they would be like in the field. The Patrol Boot, the second most numerous of the five categories ordered, is intended primarily for training, rear echelon and garrison wear rather than being a frontline boot and is a direct replacement for the brown BATES Ultra Lite (supplied by ITURRI) and YDS Kestrel patrol boots issued under the UK MoD five-year 2012 footwear supply contact. As Britain no longer has the large logistics bases seen during Operations TELIC (Iraq) and HERRICK (Afghanistan) there is currently no major requirement for a Desert Patrol Boot category.

The first thing which struck me when I first handled the ITURRI Patrol Boot was that this all-leather model does not look like a cheap barrack boot – the main uppers are even triple stitched and the padded soft leather collar and tongue looked almost luxurious. Bearing in mind that this boot currently retails around the £100 mark, when one can expect to pay around £170 for most of the popular combat boot makes, it looks like it is punching above its weight when one takes it out of the box and after three days wearing my pair in the field in Oregon and Washington States in late April I have to say that initial impressions were spot-on. These do not feel like sub-£100 boots.

These boots do not use Gore-Tex waterproof sock construction, but neither does the UK MoD Combat High Liability Boot from ALTBERG, and rely on the user taking care of the leather to keep them supple and waterproof; in addition to User Guide, Lacing Guide and Spare Laces, ITURRI also include a Boot Care leaflet in the box which promotes the use of LEDER-GRIS products (from ALTBERG) for keeping these boots in tiptop condition.

There is not much more to say about the all-leather (1.8 to 2.0mm) uppers, other than the leather gusset to the padded tongue extends up to sixth eyelet level to keep water out, there is a padded flex slot at the Achilles and vent holes each side just below the collar should pump out warm air and moisture. The wicking lining (Cambrelle) is comfortable and the removable contoured anatomical footbed (insole) with heel cup is breathable with antimicrobial treatment. The composite outsole, although not branded, appears to be the RUBBERMAC Defender, as supplied on both the Desert Combat High Liability and Cold Wet Weather boots supplied by ITURRI to UK MoD. Lacing is to UK MoD specification, with simple lace lock at fifth eyelet position and closed upper eyelets rather than open hooks. As is now quite widespread practise across armies which have learned lessons from IED strikes on troop-carrying vehicles, the cut of these boots at the back is scalloped quite low. The upper tongue outer is also asymmetric for more comfortable fit. Weight is almost exactly 750g for a single UK10L boot, which is just a few grammes lighter than their UK MoD Desert Combat High Liability boot but 300g less than their UK MoD Cold Wet Weather boot. They come in full sizes from UK6 to UK 13 and are available in both Medium and Large fittings.

Now for my personal opinion. I liked these boots from the outset and found them to be generally pretty comfortable to wear, though I did find the stiff top eyelet area created a pressure point when I laced the boots tight the first few times. I must point out that, as is my usual practise, I did not break these boots in before wearing them on assignment as many soldiers issued them would probably not be afforded that luxury. The more I break these Patrol Boots in, the more comfortable they get. One other minor point, as they do not have a deep rand like the Desert Combat High Liability or Cold Wet Weather models it is relatively easy to scratch the leather on stony going, which could cause problems if your SNCO or WO expects you to have uber-shiny boots, so I suggest you inspect them closely after a day in the field and carefully follow the boot care instructions supplied.

All-in-all, these look like pretty good boots for rear echelon wear and after a few days of breaking in they perform well too.

¤ ITURRI advise us that the main supplier for private purchase of these boots is [deleted], who advertise them on their website [deleted as domain has expired] as the ITURRI Commando Patrol Boot.