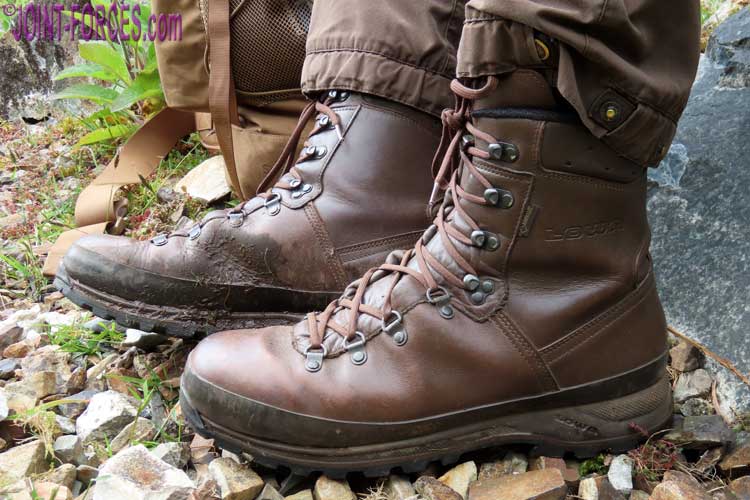 I confess to having had these LOWA Mountain Boots GTX Brown on test for a while so it really is time to get a review into Joint-Forces, says Mike Gormley.

This said, it has given me time to get a great deal of use out of these boots in all sorts of situations. Over that time I have really got to like them. Perhaps it did take a little while for these boots and my feet to get to know each other but now they have, they have become really good companions.

These are the first items of footwear from this manufacturer I have tried and now I really hope it will not be the last. I find them very comfortable, even over a long day. These are boots that there is no real rush to get off after a good few hours of wear. Something that stands out is that they are really easy to get on and off. This may sound basic, but for me it is noticeable. Relevant if in a rush or cramped into a small space, tent, vehicle and so on.

Although these are designated ‘mountain’ boots they are from the police and military boot stable and have the same UK MoD brown colour, so a definite crossover here. One thing I notice is that LOWA go up to some significantly large sizes which is a refreshing change. At UK Size 13, I often can’t get my size, but LOWA go way above this. Well done. There are folk out there with large feet and we need decent footwear too.

Clearly these are combat-style boots. They have Gore-Tex Performance Comfort insulated laminate and a good general purpose Vibram Tsavo sole. There is a protective rubber rand all around which is a very good thing. These boots have proved to be robust and have a lot of life left in them. Happy with that.

Editor’s bit: I’ll briefly jump in here with a little bit of history. My first encounter with the LOWA Mountain Boot was well over 15 years ago, when I was given a black pair with the early white leather collar for review. They lasted me well for many years until around 2013 when the German MoD supplier reproduced them in UK MoD Brown with a slightly different VIBRAM outsole, the Tsavo, for British military personnel wishing to privately purchase a LOWA combat boot. I had good use out of those for a while until, like many of our test boots, I passed them on to a soldier friend to hammer them into the ground and provide long-term feedback. These 2013 boots, like the original ‘white collar’ boots, had the earlier Gore-Tex insulated laminate (as the Comfort range now used in police and military footwear was still under development) but other than that there has been very little design change in the LOWA Mountain Boot over the last couple of decades. If it ain’t broke, why fix it?