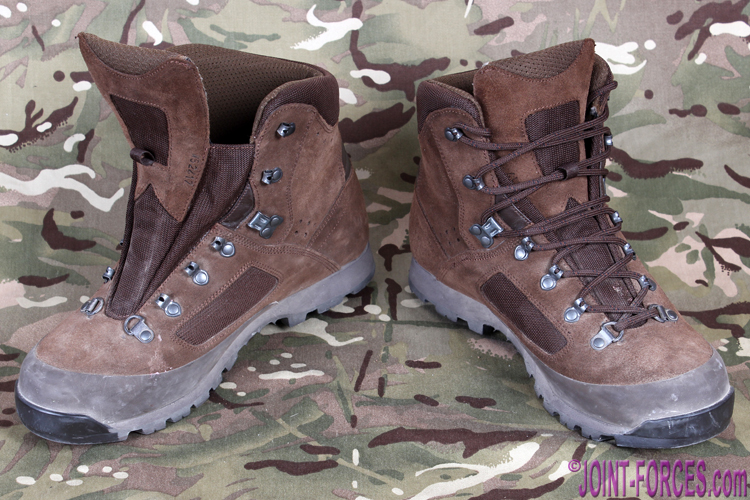 Two of the new boot types, including this one, fall into the Desert Combat High Liability category meaning they are intended for soldiers whose role makes them liable for service in teeth arms roles on the front line in hot and/or arid conditions; Iturri and HAIX are the two brands selected for this. Two more boot types, from Alt-Berg and AKU, have been selected for the same role (i.e. Combat High Liability) in temperate climatic conditions. A single boot type, each supplied by Iturri, has been selected for the other three categories which are Cold Wet Weather, Jungle and Patrol; the latter being the boot intended for troops in secondary and tertiary roles.

Back in late May I took the new Iturri Desert Combat High Liability (DCHL) boot out to the Middle East for a couple of weeks to try it out in hot conditions over semi-desert terrain while covering Warrior Competition at KASOTC, but as this boot is very different from the Spanish Army’s lightweight combat boot (Bota Combate Ligera) supplied by Iturri and as no specification for the boot has been published, I have had to hold back to allow the Seville-based company to supply construction details. At present this Iturri boot is not yet available for private purchase, so it was not possible to crib details from e-commerce sites.

Iturri also supplied one of two of the UK MoD’s last brown DCHL boot, the Desert Fox Pro from Meindl, and at first glance there look to be some similarities but close inspection reveals many differences in composition and construction. The new boot uppers are a combination of buffed split leather and cordura-type textile, but that is about the only thing the new boot and the old have in common, as the latest boot has a substantial rand over the toe area extending round to the instep and the outsole is the nitrile rubber Defender model, made by Italian company Rubbermac, which is bonded to a micro-porous middle sole for cushioning.

As with the other new – i.e. 2017 model as opposed to 2012 model – CHL and DCHL boots ordered by the UK MoD, the Iturri DCHL is lower than previous models, having a specified height of 170mm at the rear and 220mm at the front for a benchmark UK Size 9. This means there are only seven pairs of lace furniture, including a pair of D-rings at the bottom and a lace lock at the fifth position to give two-zone lacing; the other lace furniture consists of closed lace ‘tunnels’, including the two top pairs to comply with MoD insisting open upper hooks would not be acceptable this time around.

According to the specification the split leather (suede) and cordura-type fabric uppers are waterproof and breathable but the construction of this desert boot does not include a breathable waterproof membrane like some of the new generation ultra-lightweight boots. The inner is manufactured from a soft ribbed fabric, which matches the colour of the outer upper, and the boot is well-padded throughout making it very comfortable to wear; my pair also took next to no breaking in, which is just as well as I soon put them to work in quite challenging conditions.

The bellows-type tongue, which is made of water-repellent cordura-type fabric with suede stiffening is equally well-padded and is just as comfortable as the collar. Interestingly, small leather panels have been let into the uppers at the point where the laces cross the foot next to the lace lock to both reduce lace friction when tightening and reduce abrasion, and a soft leather panel has also been let into the heel at the Achilles to prevent pressure and thereby blistering when flexing.

Finally, a polypropylene semi-rigid midsole giving good resistance to torsion is fitted along with a fabric-covered anatomically preformed and perforated EVA insole. In my personal opinion, having worn these boots in high (35C+) temperatures on both hard man-made surfaces and rough desert-type terrain at KASOTC (King Abdullah II Special Operations Training Center) for several days, this is the only part of the Iturri DCHL boot that I am not totally happy with and now my trial period is over I will be swapping this for an aftermarket insole.

With the exception of that, easily solved, thin insole issue I got on very well with this boot both out in Jordan and on subsequent walks along the Devon coastline over rock and shingle during this warmer than average summer we have been experiencing. At first I was a little bit unsure about this boot which, at 750g for a UK 10W, sits roughly midway between my new AKU and Alt-Berg CHL boots and is much heavier than the ultra-lightweight new generation boots I have been wearing a lot of late, but by the end of my first long and very hot day out working alongside SpecOps competitors in Jordan I had been converted.

Update, 24th July: JOINT-FORCES.com has just been informed that this desert boot from Iturri will be available shortly for private purchase – more to follow.