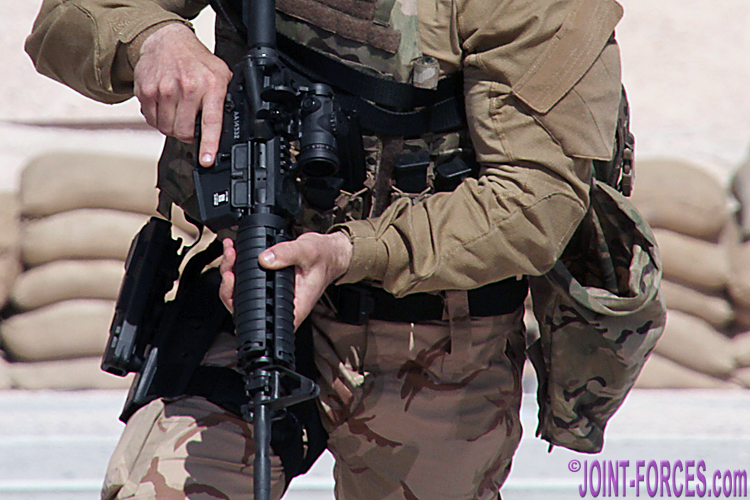 The Magazine Dump Pouch is a handy accessory which has an alternative use as a means of temporarily expanding personal kit stowage capacity, writes Bob Morrison.

For those unfamiliar with the Magazine Dump Pouch, its primary role is to give the soldier a means of quickly and easily stowing spent assault rifle magazines during rapid reloads. Normally this open-topped bag is carried rolled or folded on the belt but as it usually features a MOLLE/PALS attachment system it can also be hung off pretty much any item of modern load carriage equipment.

Although this basic concept has been around for many years, recent conflicts have seen this type of pouch become a standard issue item for many frontline troops as not only are magazines valuable reusable resources but should they fall into enemy hands they can be put to deadly use… and not just for holding bullets. It did not take even relatively uneducated adversaries in recent conflicts long to work out that a seemingly discarded magazine could be used to lure soldiers into an IED (Improvised Explosive Device) trap and as a result it became SOP (Standing Operating Procedure) to guard used magazines as as tightly as one guards one’s personal weapon; and that is without even taking into consideration the amount of ammo expended in a firefight and the consequent need to retain and replenish magazines.

So what exactly is a Magazine Dump Pouch? According to the US Department of Defence, the standard pouch specified in 2012 as part of the US Marine Corps FILBE (Family of Improved Load Bearing Equipment) shall: “be able to contain eight (8) empty M16/M4 Magazines and have a closure device. The pouch shall be adjustable by two inches in the vertical direction and compatible with the martial arts belt and PALS webbing.”

Dump pouches dropped and filled with a fleece and waterproofs [© BM]

Many aftermarket military pouch and accessory manufacturers now produce their own take on the Magazine Dump Pouch concept and as a result both cheap and expensive solutions are quite widely available for private purchase. I have been using one of the more upmarket dump pouches for several years as a simple way of boosting my daysack/camera bag carrying capacity and recently I picked up a much cheaper example to further increase my ability to carry additional kit on my back if and when required.

Very often in my job as a snapper of the military and their kit I start off the morning in cold and/or wet conditions but as the day wears on the temperature rises and the weather improves. As a result my outer layer, sometimes a fleece and sometimes a waterproof jacket, can be surplus to requirements but I still need to carry it with me and keep it easy to reach in case conditions change, though chances are that I will not have time to stow it carefully if I am in the heart of the action. This is where a simple dump pouch on my daysack can come in really handy.

My standard dump pouch, which sometimes I attach to the upper PALS tapes on the main outer face of my daysack and sometimes to the side tapes so that it hangs over my right hip – my being right-handed, it is easier to access here – was produced by UK company Intelligent Armour and is very much a high end product. Retailing at £36 and not currently listed as being in stock, though you may be able to pick up one through one of the specialist outlets where equally specialist soldiers shop, this pouch is constructed from full military specification 1000D MultiCam Cordura and genuine MultiCam mesh with a paracord and spring toggle neck closure.

My recently purchased second dump pouch is from the other end of the scale, from the Disciple Tactical range stocked by Drop Zone Supplies outlets, and cost under £14 but does pretty much the same job; by attaching this to the lower left side of my daysack I can double my temporary stowage capacity and as it is slightly deeper than the Intelligent Armour version I can even stuff & stow my Snugpak SJ-6 insulated jacket in it. This compact folding pouch is manufactured from what the supplier describes as MTE-C (Multi Terrain Environment Camouflage) material and they describe the camouflage, which has the word DISCIPLE printed through it, as Multi Terrain Disruptive Pattern.

Both pouches are compatible with UK MoD MTP (Multi-Terrain Pattern) camouflage, and the Crye one meets NATO IRR requirements as the fabric is to full military specification, and of course they are also visually compatible with both Genuine MultiCam and US OCP uniforms. Each of these pouches uses a slightly different MOLLE-style attachment method, but this should not be an issue as they do exactly the same job – we will take a closer look at the MOLLE/PALS system and variations in a future feature. Precise dimensions vary from maker to maker, but generally they are large enough to hold eight to ten 30-round 5.56mm magazines.

Hopefully this article, which it must be remembered is only a brief look at two of the many Magazine Dump Pouches on the market, will prompt readers to think about just how useful a low bulk and low weight expanding pouch can be as a secondary stowage resource.