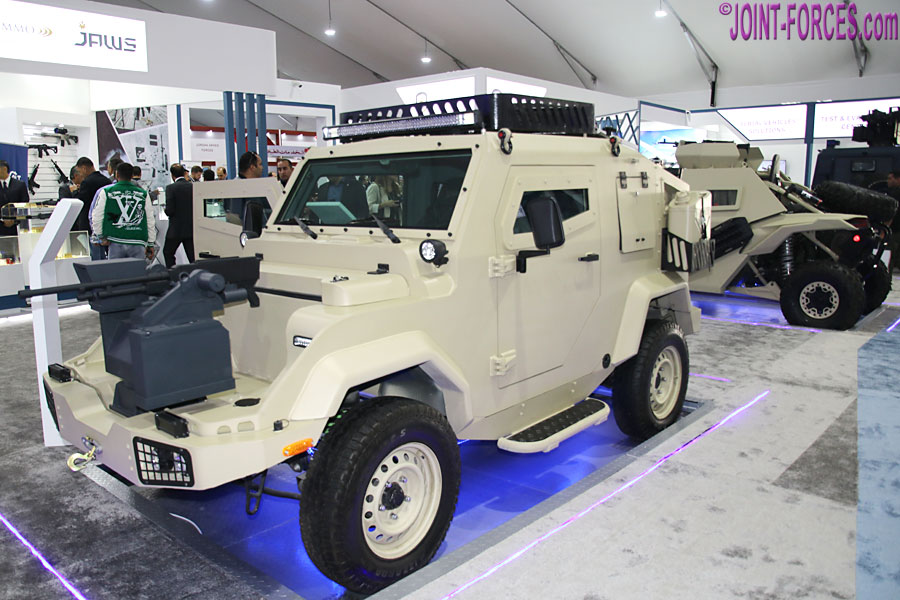 The JODDB Al-Hajras Armoured Tactical Vehicle displayed at SOFEX 2022 is possibly one of the most intriguing newcomers on the 2022 expo scene, writes Bob Morrison.

Conceived as a compact and lightweight high mobility armoured tactical vehicle, aimed primarily to fulfil an operational requirement for convoy protection and law enforcement support in confined / urban environments, the Al-Hajras is somewhat unique for such a small armoured 4×4 in having its engine at the rear and a remote weapon station at the front.

Powered by a 1462cc 4-cylinder engine developing 100hp, possibly the K15B as used in the Suzuki Jimny, this 2200kg GVW 4×4 has a four-speed automatic transmission and offers 400kg payload. The forward-firing remote weapon station ~ only a non-functional replica was fitted at SOFEX 2022 ~ would be controlled by the vehicle commander from the front right seat and appears to have a firing arc well in excess of 180°. Placing the weapon station at the front significantly reduces the height profile and gives better centre of gravity and weight displacement for such a light vehicle, but does mean the rear arc is open to attack if the vehicle were to operate on its own.

This unusual vehicle, despite weighing little more that a couple of tonnes, is armoured to EN 1063 BR 6 (B6) level which makes it proof against 5.56, 7.62x39mm and 7.62x51mm rifle bullets as well as pistol rounds up to .44 Magnum. The otherwise dead space behind the crew compartment is utilised for ammunition storage, with side-accessed slide-out racks for ammo boxes; though of course a crew member would need to leave the protection of the cab to reload the RWS.

At present the Al-Hajras is only a prototype, but if this tiny and very manoeuvrable two-person (Jordanian SpecOps has growing female representation) vehicle progresses to full production with JLVM it will be interesting to see if the concept of placing the main armament at the front is picked up by other nations.

¤ In my next brief article on JODDB vehicles I plan to look at the LC79-based Al-Maha armoured internal security vehicle.

Al-Hajras, Featured, JODDB, SOFEX 2022, Special Operations
You may also like