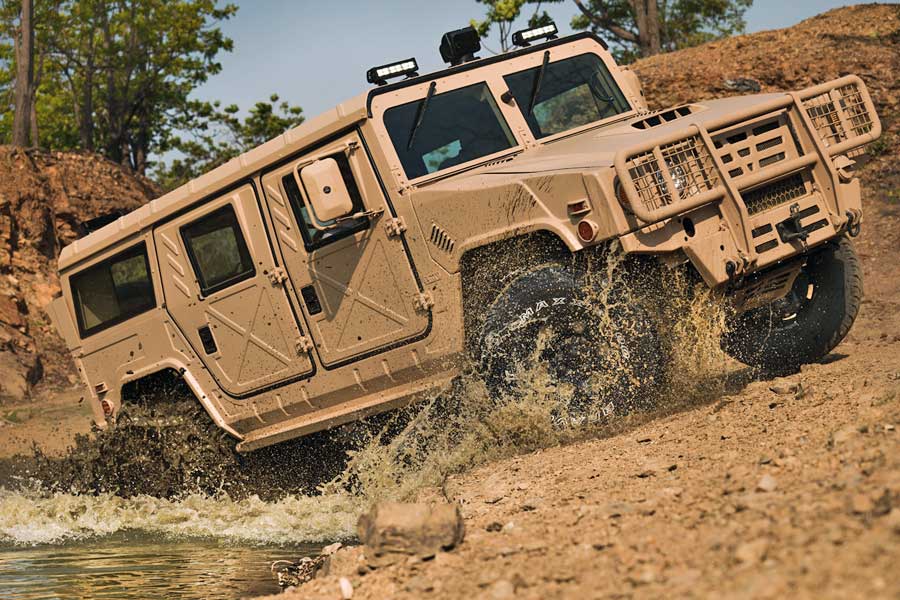 As the British Army looks to replace much of its TUM fleet with the GSUP might the STI-Steyr Light Multi-Mission Vehicle fit the bill, ponders Bob Morrison.

Many armies are moving away from the traditional and conventional rugged 4×4 utility vehicles, like for example the Land Rover or Mercedes-Benz Geländewagen or Steyr-Daimler-Puch Pinzgauer, in favour of mass-produced five-dour Sports Utility Vehicles and/or their two-door pick-up truck siblings, but might there still be a case for running a less technically advanced and therefore easier to operate and maintain fleet of more basic specification light trucks? After all, does a soldier operating in the back of beyond really want to have to rely on the very latest electrickery to get him or her out of an off-road pickle and do they have the time to wait around for a representative from the ‘fourth emergency service’ to turn up with a diagnostics laptop to get the wheels rolling again if their truck breaks down or throws an electronic tantrum? Forty years ago when the One-Ten and G-wagen were new kids on the block they could still often be fixed with a Swiss Army knife, baling twine and a length of wire, a lump of chewing gum, and some basic mechanical and electrical knowledge. But I digress.

The STI-Steyr LMV or Light Multi-Mission Vehicle, produced by Austria’s internationally famous manufacturer of road maintenance machines, which also operates and manufactures in the Emirates as STI (Steyr Trucks International) Defense, is a 3,500kg to 4,500kg gross weight 4×4 no-frills utility vehicle offering a payload of 1000kg to 1900kg dependent on body configuration. In five-door configuration as seen here the LMV measures 5100x1880x1850mm high, but three-door high-line ambulance / communications bodies and soft-top troop carrier versions are also available, as is an open Special Operations Vehicle version. Top speed is stated as being 140km/hr and road range is up to 1200km, dependent on variant.

Although very much a Hum-vee, or even a VAMTAC, look-alike the STI-Steyr LMV has a much more conventional interior layout than the American military utility and as a result it is more capacious and has a load bed large enough to accept a standard cargo pallet behind the second pair of seats; though it is more likely that such a load would be carried in a crew cab version to allow full pallet height. Confidentiality clauses prevented representatives at MSPO 2022 confirming which countries this vehicle is in service with, other than saying it has been sold in bulk in the MENA (Middle East & North Africa) Region and in Asia, but company military sales literature has photos of quantities of vehicles in different configurations sitting side-by-side which bear out these claims.

Unfortunately the STI-Steyr LMV, which appeared on static display at Eurosatory in Paris in June and then at MSPO in Poland in early September, is unlikely to be able to make it over to DVD 2022 later this month, which is a pity as it would be interesting to see how it fares around the Millbrook off-road tracks (on decent off-road tyres of course).