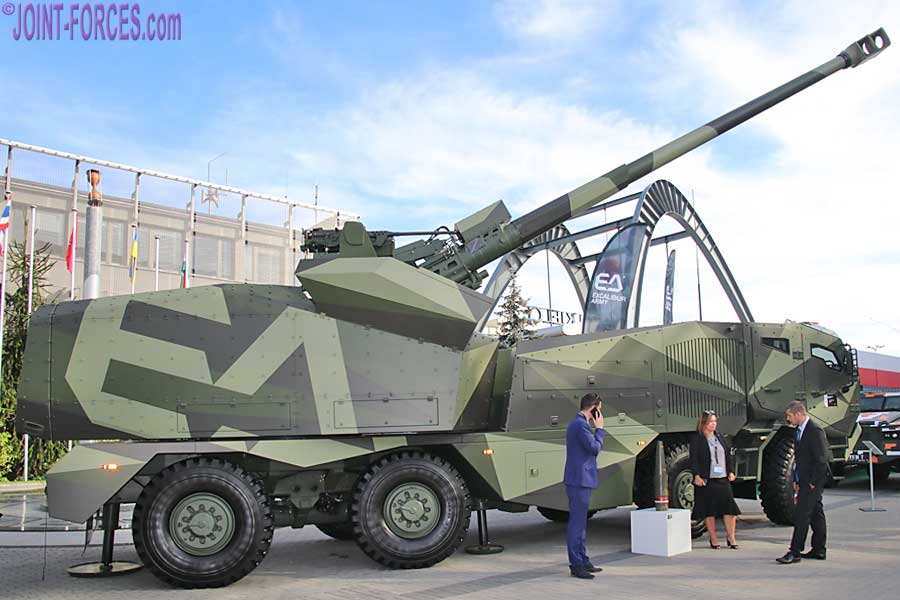 MORANA, unveiled at EUROSATORY 2022 and displayed at MSPO 2022 last week, is a 155mm SPH (self-propelled howitzer) on an 8×8 TATRA chassis, writes Bob Morrison.

An evolution of the successful Czechoslovak DANA ShKH vz.77 152mm self-propelled howitzer, the Czech 155mm MORANA from EXCALIBUR ARMY is a possible contender for a number of forthcoming NATO artillery requirements ~ including the British Army’s Mobile Fires Platform to replace the L131 AS90 tracked howitzer; note this UK MFP requirement has not yet been formally launched, but many suspect that a mix of tracked and wheeled platforms might be chosen to accompany the revised armoured and mechanised formations respectively.

When displayed indoors at Eurosatory 2022 in Paris in June, inside a hall full of visitors who prevented a clear view of the vehicle, it was a little difficult to appreciate the size of this comparatively large yet not infeasibly tall wheeled 155mm 52 calibre artillery system, but when seen outdoors at MSPO in Kielce with its gun elevated it looked to be a very capable package indeed. Able to be operated by just three (commander, gunner and driver) but with four crew seats in the STANAG 4569 Level 2 armoured Puma cab, the fully automated MORANA can lob standard NATO 155mm rounds over 41km, at a rate of six rounds per minute courtesy of its auto-loader, and carries 45 ready rounds stowed on board;it can also be used in the direct fire role out to 5,000 metres.

Precise dimensions and specifications of this new prototype have not been released but we know the base tubular chassis is a Tatra 8×8, powered by a 600hp engine through an automatic transmission with a top road speed of 60km/h being claimed. To maximise off-road performance, all wheels are steerable and a central tyre inflation system (CTIS) is fitted. In addition to being able to self-deploy over long distances with minimal maintenance, unlike tracked self-propelled howitzers which require a transporter for long road moves and regular track maintenance after moving any great distance, MORANA has also been designed for long range transportation across Europe’s rail network.