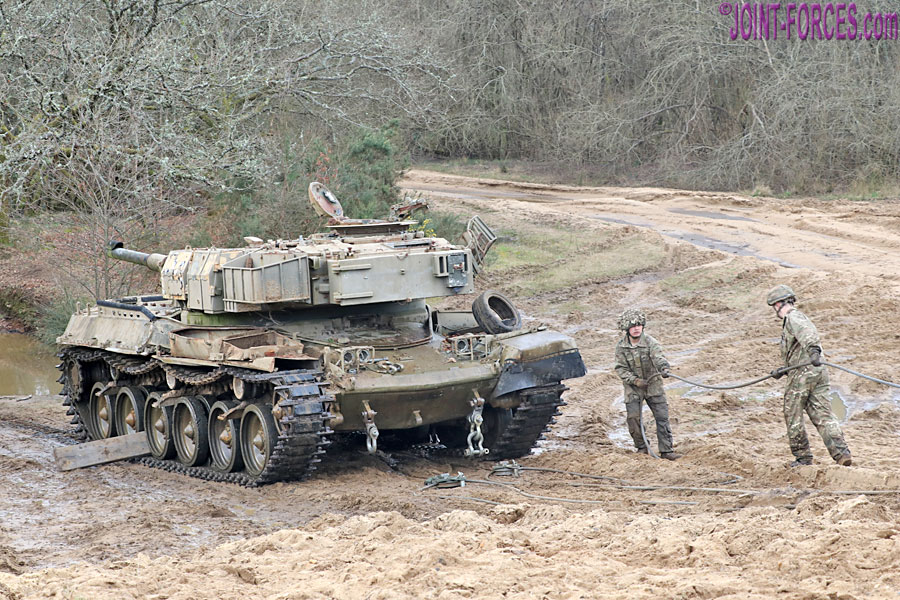 The role of REME, the Corps of Royal Electrical and Mechanical Engineers, which turns 80 this October, is in very simple terms to maintain, repair and manufacture equipment to keep the British Army’s weapons, vehicles, aircraft and systems in fighting order both in peacetime and on the battlefield.

A soldier choosing REME as his or her cap badge has the possibility of serving with just about any unit in the British Army, pretty much anywhere in the world that there is a UK military presence, and carries out their chosen trade every day rather than just when they and their unit are on exercises and operations. The eight core REME trades are: Aircraft Technician; Armourer; Avionics Technician; Electronics Technician, Metalsmith (and Shipwright); Recovery Mechanic; Technical Support Specialist; and Vehicle Mechanic. All new soldiers joining this specialist Corps are enrolled on apprenticeships and in time most gain recognised qualifications, ranging from NVQ through to Engineering Degree, facilitating professional recognition from Engineering Technician through to Chartered Engineer levels. Reflecting the level of qualifications gained, in REME promotion through the ranks can be fast.

Before joining their first unit a REME soldier normally qualifies as a Class 3 Craftsman; today, of course, this term is no longer gender-specific and there are plenty of female REME mechanics and technicians, as we spotted during IRON CHALLENGE. After induction training and learning basic soldiering skills, as a Craftsman has to be able to fight as well as to fix, recruits complete a period of classroom-based training to provide the background knowledge for their role followed by further practical training that is specific to their future trade; according to the MoD, this training is conducted in a classroom, on demonstration pieces of equipment and in an outside exercise–type environment. Soldiers are assessed on their current knowledge in order to identify their level of key skills then further training is provided, with most attending a common foundation training which lasts for six weeks. All selected to go down the Aircraft, Avionics or Electronics routes then attend a further seven weeks of technician foundation training.

Once out of training and assigned to a unit REME Craftsmen have to be able to confidently tackle a very wide range of tasks across their chosen area of specialism to keep their unit’s equipment in tiptop condition. However there will always be tasks which require a much greater level of knowledge and qualification, hence the requirement for Craftsman Class 2 and Class 1 categories. In normal times there would be sufficient training opportunities available, both on regular specialist courses and during routine scheduled exercises, to allow REME soldier to progress along their career path but over the last couple of years programmes have been affected by the restrictions imposed by the COVID-19 pandemic plus additional disruption caused by some soldiers being seconded to undertake unexpected duties such as providing Military Assistance to the Civil Authorities or being operationally deployed.

To assist REME soldiers’ career progression get back on track as COVID-19 regulations eased off, Exercise IRON CHALLENGE 2022 was adapted to provide a three-week concentration of pure trade training on the Longmoor and Bordon facilities in Hampshire. A group of 200 Class 3 Craftsmen was brought together from across the Divisions for three weeks of intense training under the guidance of 135 instructional staff in what the Army terms ‘Safe To Fail’ scenarios. Unlike if they were undertaking maintenance and repair or recovery tasks during normal exercises or while working within their active units, students on the TTX were able to learn through trial and error, safe in the knowledge there would be no consequences or ramifications if they were to make a mistake or fail in a task. Students were also not put under excess pressure by having to study at night to pass tests next day after having already put in a full day in the classroom, workshops or out in the field and as a result it was felt by all that much more was gained from the experience. Don’t think, however, that this ‘REME concentration’ was a holiday, as each student racked up on average in excess of 150 hours of hands-on training over the three week duration.

Although there are eight distinct REME disciplines, there was no dedicated Aircraft Technician or Avionics Technician training during IRON CHALLENGE 2022 as the specialist facilities of the Army Aviation Centre at Middle Wallop would have been needed for this. However in addition to expanding their own capabilities the participating students from the remaining six disciplines were able to gain a little insight into what other specialists do for a living and were given the opportunity to try our different experiences from their normal routines. As someone who originally trained in mechanical engineering, and indeed at one stage even considered a military engineering career before a workshop eye injury ruled this out, I found all aspects my day out with REME to be both very interesting and highly informative even though I have covered many aspects of the work of the Corps throughout my second career as a journalist.

Although I have seen the work of the ‘recce mech’ many times before over the years, the time I spent out on the training area watching students recovering first an overturned and then a bogged main battle tank (both Chieftain training hulks in case you are wondering) proved to be fascinating. I intend preparing a couple of very brief follow-on mini-features on these aspects in the not too distant future for those who have not seen how it is done.