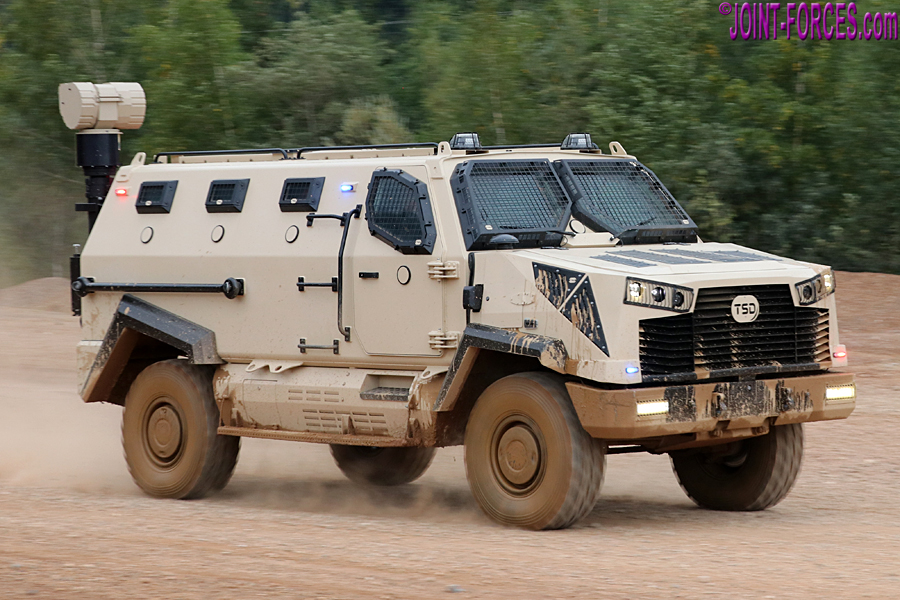 Launched in November 2020 by the long-established Spanish vehicle conversion company TSD, based in Herencia roughly 150km south of Madrid, the IBERO SMV20 has already been ordered by one West African nation and several other governments have expressed firm interest in this STANAG Level I MRAP (Mine Resistant Ambush Protected) 4×4 which is based on the latest Unimog FGA (Fahrgestell für Gesonderte Aufbauten or Chassis for Special Bodies) model.

I first encountered the SMV20 at the Mercedes-Benz DVE (Defence Vehicles Experience) in Austria at the end of September, where I also had the chance to photograph it out in the open, both static and moving, and earlier this month at the FEINDEF 2021 defence and security expo I was allowed to take a couple of snaps of the interior. While in Madrid I also picked up an English language version of the sales brochure and was given a one-to-one briefing by the head of international business development.

Of fairly conventional three-door design, with driver and commander behind the engine and with rear compartment seating for up to six troops or police officers, the standard wheelbase version seen here (a long wheelbase 14.5 tonnes GVW version is also available) measures 6300 x 2800 x 2650mm high to top of hull. Ground clearance is 450mm, approach and departure angles are 35° and 30° respectively and unprepared wading depth is 800mm. Turning radius is given as less than 8.5m and a central tyre inflation system (CTIS) is fitted as standard. Traction is full-time 4×4 with locking differentials and a 4-cylinder M-B 4.8 litre Euro III (or Euro V) diesel engine, through an Allison automatic gearbox, provides 218hp. No top speed is quoted for the SMV20 but operational range is given as 800km, a 500mm step can be negotiated, a 900mm trench can be traversed, maximum gradeability is 60% and a 30% side slope can be crossed.

Although the basic vehicle offers STANAG 4569 Level 1 protection, ballistic protection is configurable up to Level II and mine and IED protection is configurable up to Level 2A or 2B if required plus anti-mine blast seats can be fitted. A Remote Weapon Station for self-protection can be roof-mounted above the cab, a thermal surveillance camera on extendible mast is an option, and a full 360° situational awareness camera system can be supplied. A full range of counter-terror and riot control accessories, including assault platform and barricade dozer blade, can be fitted to the Internal Security variants.

According to TSD, the IBERO SMV20 “has been endowed with enough versatility and agility to be able to adapt to any civil-military mission”.