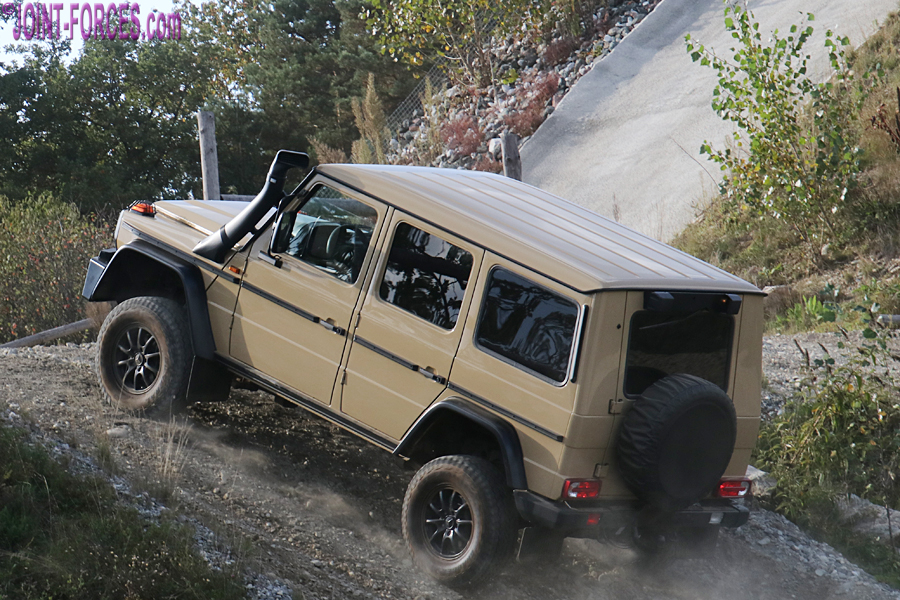 In the first major upgrade to the G-Class, originally known as the Geländewagen or G-wagen, in 26 years Mercedes-Benz has engineered major performance changes while still retaining the familiar appearance of the compact 4×4 favoured by many armed forces and blue light responders around the globe. [At this point it is possibly worth saying that the term Special Operations is ‘corporate speak’ for Defence and Security Forces, rather than what most of our readership would consider to be Military Special Operations Forces, but plans are also afoot to produce dedicated Airborne and Special Forces variants on the new base vehicle].

Intended to replace the current 461 model series from next year, though spares for the older vehicles will be produced for a least 15 more years, the new generation 464 model series G-Class will at first be produced in 2850mm wheelbase five-door Station Wagon and 3650mm two-door Chassis Cab versions; but this will just be the start and in due course it is planned to introduce the same broad range of variants available on the current model. The standard wheelbase G-464 BA06 has a GVW of 3500kg, allowing it to be driven on a standard driving licence, and the long wheelbase G-464 BA09 has a combat weight of 4900kg. Both are powered by the 2925cc G 350d six-cylinder turbo-diesel engine.

At the G-464 world première in Graz, at the G-Class Experience Center near the main production base in Austria, Dr Emmerich Schiller, Head of the Off-Road Vehicle Product Division at Mercedes-Benz AG and CEO of Mercedes-Benz G GmbH, told us: “Developing a product that can ensure the highest possible availability and security of personnel in extremely demanding peacekeeping and security missions is a top priority. The G-Class takes responsibility in this respect and has proved itself a reliable partner over decades, even in extreme and almost impassable terrain.”

According to the company press release: “The key to its [G-464] on-road and off-road mobility is a powerful new common-rail turbo diesel engine with more power (183 kW / 249hp) and increased torque (600 Nm) that consumes less fuel despite increased performance. The Euro III engine can be operated with fuel of varying quality.

“The new G-Class impresses with its high level of robustness. In addition to the engine and automatic transmission, transfer case, longitudinal and transverse differential locks the sturdy ladder-type frame also supports the rigid axles at the front and rear, thus providing optimum conditions for use in the most difficult conditions.

“Characteristics of the vehicle’s extraordinary off-road capability include the high ground clearance of 221 millimetres, a lean angle of up to 54 percent and a maximum gradeability of 100 percent. The fording depth has been increased to 660 mm.”

For military customers, mission-specific technical equipment is integrated ex-factory. This includes the 24-Volt on-board electrical system, stealth lighting, infrared light and EMC (electromagnetic compatibility) protection in accordance with recognised standards. The latter helps to optimise the emission of electromagnetic interference and the vehicle’s immunity to such interference with respect to the electrical installations installed by the customer.

One unique feature of the new model is the Emergency Override Switch which makes it possible to bring the crew and vehicle to safety immediately and quickly in dangerous situations. In such a situation engine protection measures, such as overheating protection, are bypassed. [In simple terms, this puts the vehicle into ‘limp mode’ and returns control to the driver when the onboard computer wants to shut the engine down to keep it within peacetime regulations.]

Mercedes-Benz say: “More than 60,000 units of the G-Class ‘for Rescue and Special Operations’ have been delivered since 1979 and have proved their worth in guard, patrol and liaison duties, in disaster relief operations and in peacekeeping missions all over the world. For the users, more than 60 different equipment sets have been integrated, allowing broad use in a variety of roles, for example as mobile medical units, fire service and police vehicles, or as radio communications vehicles. Users benefit from the long service life of the G-Class. Individual vehicles have achieved a service life of over 30 years in tough customer use.”