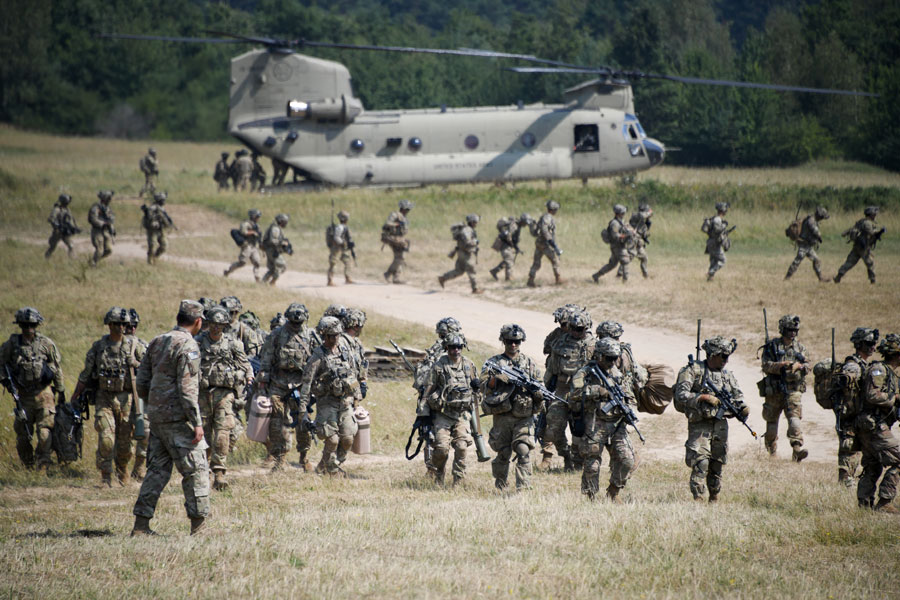 SABER JUNCTION 20 was recently conducted by the US 7th Army Training Command to assess the readiness of the US Army’s 173rd Airborne Brigade, reports Bob Morrison.

Held on the US Army’s Grafenwöhr and Hohenfels Training Areas in Bavaria, mostly between 3rd and 27th August though some participating troops actually spent seven weeks in the field, the main aim of the recent annual exercise was to assess the readiness of the 173rd Airborne Brigade to both execute unified land operations in a joint, combined environment and promote interoperability with participating Allies and Partner nations.

Although I was able to visit the exercise over its final weekend – see SABER JUNCTION 20 ~ A Brief Update – to gain an interesting insight of the bigger picture, two days moving from location to location on such a vast training area as Hohenfels where troops are manoeuvring around the clock is not really sufficient to allow comprehensive photography of such a complex exercise. Fortunately the US Army deployed several uniformed Combat Camera Team photographers throughout August and by perusing their images, some of which are reproduced here, it has been possible to fill in the many gaps in my own photo coverage.

Both Carl and myself have worked at Hohenfels many times over the years – in my case three times since 2015 – but we have not actually concentrated very much on 7th Army Training Command (7th ATC) and its key role. As SABER JUNCTION 20 was a very complex exercise with a new scenario (which is Classified so we cannot delve into it) conceived primarily to address potential situations which the 173rd Airborne Brigade Combat Team, the the US Army’s Contingency Response Force in Europe, conceivably and potentially might face the well-oiled 7th ATC organisation was much in evidence out on the ranges… but these guys and gals were just the tip of a very big iceberg.

Headquartered at Tower Barracks in Grafenwöhr in Bavaria, about 80 kilometres north of Hohenfels, the 7th ATC organisation exercises Training and Readiness Authority over four active US Army brigades, namely: 173rd Airborne Brigade, forward deployed to Vicenza in Italy and Grafenwöhr in Germany; 2nd Cavalry Regiment, the Stryker Brigade Combat Team based in Vilseck and able to rapidly deploy throughout Europe; 41st Field Artillery Brigade, headquartered in Grafenwöhr and able to provide long range, precision fires across Europe; and 12th Combat Aviation Brigade based in Ansbach in Germany, which is the core of US Army Aviation in Europe. However during SABER JUNCTION 20 it was just one brigade, the ‘Sky Soldiers’ of 173rd ABCT, plus of course the non-US military participants working alongside or at times against them on this complex series of training missions, who received their attention and the benefit of their experience.

In addition to their work at the Joint Multinational Readiness Center or JMRC at Hohenfels, 7th ATC also resources training readiness for all USAREUR (US Army Europe) assigned and allocated forces throughout the US EUCOM (European Command) area of operations at: the Joint Multinational Simulation Center or JMSC at Grafenwöhr; the 7th Army Non-commissioned Officer Academy or NCOA, also at ‘Graf’, which additionally develops NCOs from across the NATO Alliance and Partnered Nations; Training Support Activity Europe or TSAE, which provides home-station and expeditionary training support across US EUCOM and US AFRICOM; and the Combined Arms Training Center or CATC at Vilseck, which is the USAREUR institutional training asset. The trainers of 7th ATC also oversee the development efforts with partnered nations at the Joint Multinational Training Group Ukraine or JMTG-U at Yavoriv, which we visited for RAPID TRIDENT 19, and the Georgian Defense Readiness Program-Training or GDRP-T at Vaziani (where British and Polish troops are due to join American and Georgian units on NOBLE PARTNER 2020 this coming week. The breadth of expertise these US Army training personnel can bring to the exercises at Hohenfels is quite possibly second to none, and not least because many have also recent operational experience around the globe.

The Joint Multinational Readiness Center at Hohenfels is “the Europe-based Combat Training Center with a world-wide mobile training capability to train leaders, staffs, and units up to Brigade Combat Teams(+) and multinational partners, to dominate in the conduct of Unified Land Operations anywhere in the world, now and in the future”. The only US Army Combat Training Center outside of the Continental US, the JMRC is based at Hohenfels training area which covers over 160 square kilometres, has almost 320km of roads and numerous off-road trails, features 1,345 buildings for training, and even has its own STOL (Short Take-Off and Landing) airfield.

In addition to 15 Observer Coach Trainer Teams (OCT) the JMRC provides a dedicated Opposing Forces or OpFor formation – the 1st Battalion, 4th Infantry Regiment or 1-4 IN – to provide a highly capable enemy conventional and/or unconventional enemy with its own vehicles and weapons for units on exercises to go up against. See Carl’s recent articles for more on these ‘Men In Black‘ who endeavour to “provide realistic joint and combined arms training conditions focused on developing soldiers, leaders and units for success on current and future battlefields.”

In the second part of this feature (hopefully brought to you in 10-14 days after another brief flurry of activity in what is turning out to be a very busy late summer) I intend to take a brief look at the Sky Soldiers of 173rd Airborne Brigade Combat Team.