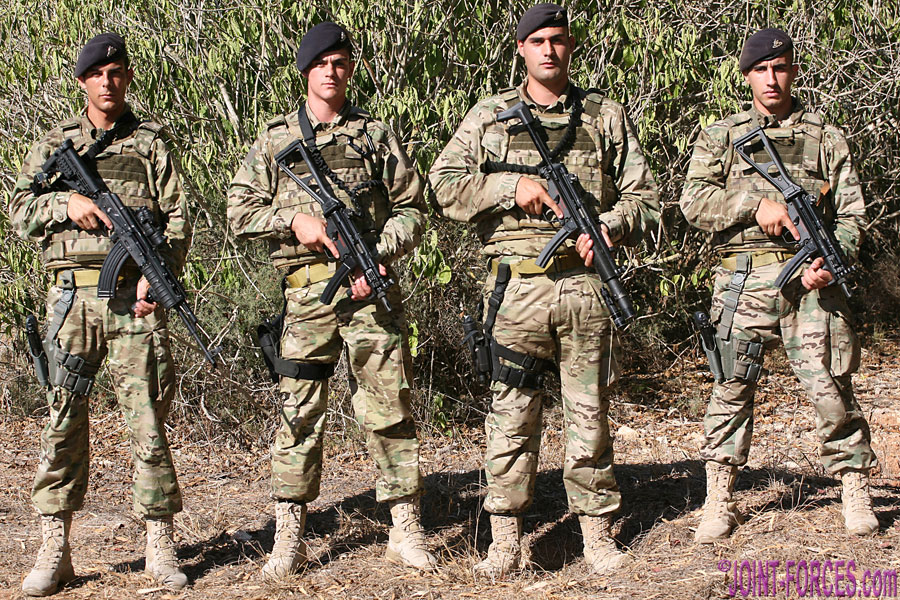 At the end of August 2014 I was invited to the ‘George Cross Island’ of Malta to exclusively photograph her Armed Forces and their uniform, writes Bob Morrison.

It had originally been my plan to revisit both Mediterranean islands of Malta and Cyprus to bring myself up to speed on both AFM and the forces deployed on the UNFICYP mission once the planned DEFENDER-Europe 20 major deployment and associated NATO and US Army field training exercises exercises had drawn to a conclusion, but the COVID-19 pandemic upturned the apple cart. However as the structure of the Armed Forces of Malta has not changed to any great extent over the last six years, and as subsequent changes to kit have been relatively minor – primarily helmets and some load carriage equipment – my observations on them from 2014 are still mostly valid.

Background: The nation of Malta comprises an archipelago of small Mediterranean islands, in total measuring just over 300 square kilometres or 120 square miles, at a strategic point between the continents of Africa and Europe. Since Phoenician times it has been fought over, and occupied, by many major powers intent on securing its sheltered harbours but since 1964, when granted independence by Britain, it has been a totally self-governing Republic.

Malta’s location halfway between the Straits of Gibraltar to the west and The Levant to the east – around 285km / 175 miles east of Tunisia, just over 325km / 200 miles north of Libya and just 80km / 50 miles south of Sicily – puts it on the very frontline of today’s unrest between the troubled Arab / Muslim nations and the predominantly Christian European mainland to the north. For most of the current century, and more so since the outbreak of the ‘Arab Spring’ or ‘Jasmine Revolution’ along the southern shores of the Mediterranean in 2011, Malta has been heavily involved in both policing the boatloads of migrants being trafficked northwards from an unstable North Africa and attempting to prevent fundamentalist terrorists gaining access to Europe under cover of the tide of humanity seeking a better life on what some would say is a more liberal, and most would agree more economically attractive to refugees, northern continent.

Roles: The Armed Forces of Malta (AFM) in addition to being an organisation “tasked with primary defence functions and safeguarding national sovereignty and interest, both in peacetime and in crisis” also contributes to international Crises Management Operations. Indeed on the very day I arrived on the island in the summer of 2014, AFM’s Special Duties Enhanced Boarding Team (SDEBT), who had just returned from participating on the EU Naval Force (EUNAVFOR) Operation ATALANTA off the Horn of Africa, were receiving their operational medals aboard the Dutch frigate HNLMS De Zeven Provinciën which had just returned from patrolling off Somalia.

Despite Malta only being a tiny nation, with a population of less than half a million and a combined military force of just a few thousand personnel, it also plays a major role in Mediterranean Maritime Search & Rescue, monitoring and patrolling a massive area of international waters from Tunisia and Sicily all the way east to Crete. The AFM Operations Centre at their Luqa Headquarters houses the Malta Search and Rescue Coordination Centre for both maritime and aeronautical incidents, which coordinates all SAR missions in the region. On the morning when most of the accompanying photos were taken, the RCC sprang into action to coordinate the rescue of over 250 souls from a foundering vessel by the AFM Maritime Squadron’s Protector-class Offshore Patrol Vessel P52 and Austal-class Patrol Vessel P24.

Structure: The Armed Forces of Malta is a tri-service brigade-sized formation which comprises an Headquarters, three battalion-sized land forces Regiments, an Air Wing with both helicopters and fixed wing patrol aircraft, and a Maritime Squadron with patrol boats, plus an Emergency Volunteer Reserve Force. During my brief visit I concentrated on the Regiments, which consist of career Regulars who sign up for 25 years’ service with a full pension at the end.

1st Regiment AFM is Malta’s Infantry formation and consists of:-

Malta’s land forces traditions originate in the Royal Malta Artillery, hence the ranks of Gunner and Bombardier plus the cap badge and stable belt etc. The new uniform introduced in 2014 is tailored similarly to British Army Soldier ’95 but the camouflage pattern used is Genuine MultiCam, not Multi-Terrain Pattern as erroneously stated on many internet reference sites. For more on this uniform see: Armed Forces of Malta ~ AFM MultiCam.

As of September 2020, around a dozen Maltese troops are operationally deployed with the Irish Defence Forces contingent on the UNIFIL mission in Lebanon.