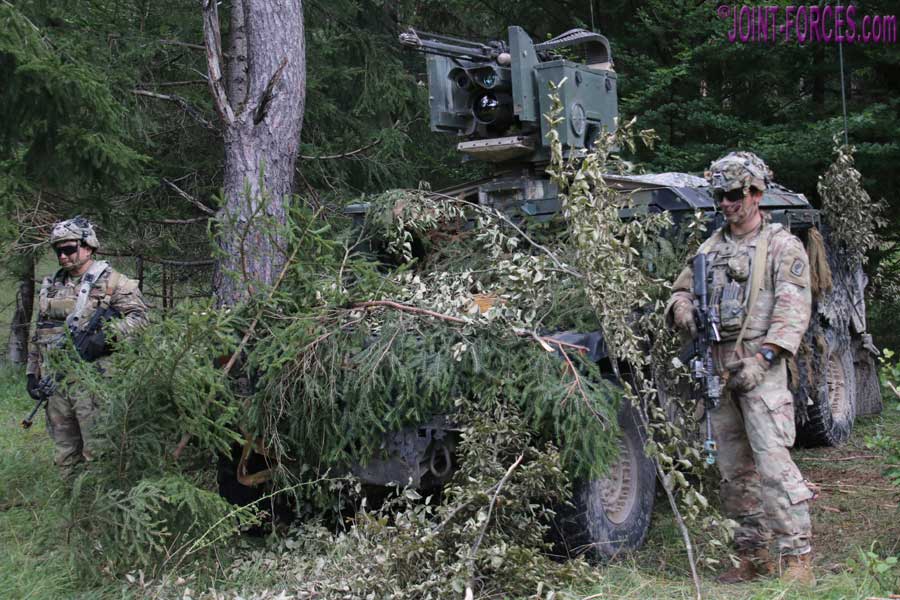 After drying out kit and cameras overnight we joined troops on the ground at Hohenfels for Day 2 of the final LIVEX phase of SABER JUNCTION 20, reports Bob Morrison.

Saturday’s thunderstorms and downpours over Hohenfels Training Area, the remnants of Storm Ellen which battered Eire, Wales and Southern England on Friday, appear to have caused several scheduled exercise events planned for late Saturday and early Sunday to have been pushed back or rearranged so some activities we had hoped to capture on camera today in daylight have been rescheduled for tonight. Such is life, and if everything on a field exercise ran exactly to plan and on time the full training benefit would quite probably not be achieved.

Even though we did not manage to see and photograph everything on our wish list, other unexpected opportunities presented themselves through the course of the day before in mid-afternoon the heavens opened again. When we think of the ‘Sky Soldiers’ of the US 173rd Airborne Brigade Combat Team the first picture usually conjured up is of elite 503rd Infantry Regiment troops being rapidly flown into the combat zone, but of course there is much more to a Brigade Combat Team than just the Infantry. Although it had not been my intention to photograph the brigade’s Airborne Engineers and some of their equipment, when offered the chance I grabbed it. Watch out for a future feature on this specialist asset of the ABCT.

A couple of examples of the new Army Ground Mobility Vehicle or A-GMV also popped into frame today and I plan to take a look at this interesting light 4×4 in the not too distant future, using a mix of my own and US Army Combat Camera Team photos. SABER JUNCTION 20 might not have panned out for me quite how I expected it to, but I have still had a highly worthwhile short trip out to Bavaria and have gleaned an interesting insight to the 173rd ABCT as it moves forward into what may well be turning into another uncertain decade if mainstream media reporting is to be believed.

My hearty thanks to both the JMRC (Joint Multinational Readiness Center) Hohenfels Public Affairs Officer who gave up her weekend to escort me ‘inside the box’ and to the Specialist, usually more at home with a camera, who piloted her Humvee (HMMWV) around and over the many obstacles in our path to ensure we got precisely where we needed to be on the vast training area.