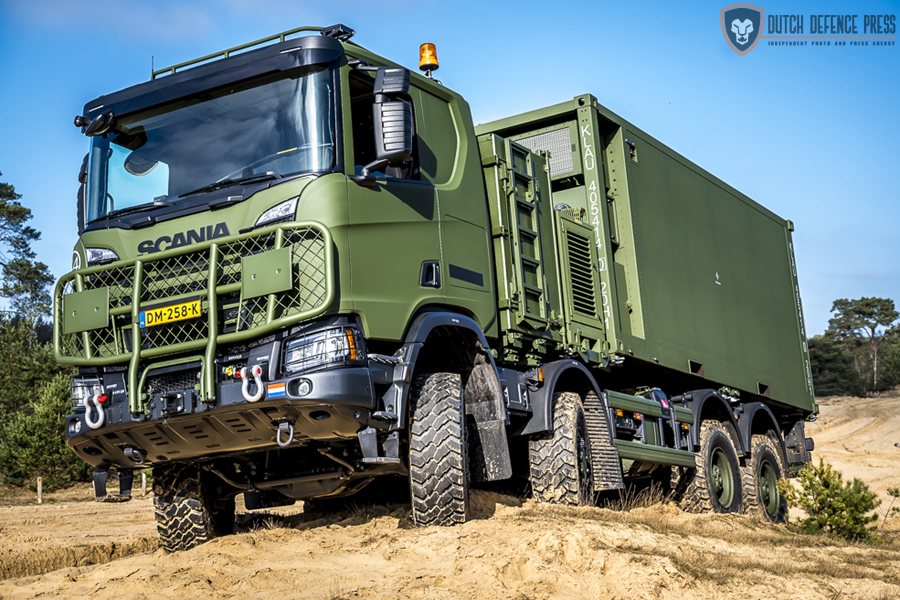 The Dutch military are replacing their iconic but aged DAF YA-4442 truck fleet with the ultra-modern Scania Gryphus 8×8 model as part of DVOW, reports Gerard van Oosbree.

From this week on the iconic DAF YA-4442 4-ton trucks of the Dutch military will be replaced by the ultra-modern Scania Gryphus 8×8. It will take a couple of years before the entire 30+ years old YA-4442 fleet will be completely gone from inventory; replacing more than 2800 vehicles will take until 2026.

The Scania Gryphus is part of the bigger DVOW (Defensiebrede Vervanging Operationele Wielvoertuigen or Defence-wide Replacement Operational Wheeled Vehicles) project that includes all operational wheeled vehicles in the Dutch military. Already completed is the acquisition of the Volkswagen Amarok as a utility vehicle. Still running is the replacement of the Mercedes-Benz 290 Geländewagen by a new MB vehicle and the acquisition of the armoured Iveco MTV which was unveiled at IDEX in Abu Dhabi last week.

Replacing the YA-4442s will be on a one-for-one basis. Units will send their drivers and vehicles to the barracks in Stroe where they will literally swap old for new. Drive into the hall on one side with the old truck, checking if everything that needs to be turned in with the truck is there – such as first aid kits and jump-leads etc. Then checking if the new equipment is all there and drive out of the garage on the other side with a brand-new truck.

The operational units will receive their new trucks in the same configuration as their old ones. If they hand in a cargo version they will get a cargo version back or if it is a command vehicle they will get a new Scania 8×8 with a command container on the back; these containers are manufactured by Marshall Land Systems from the UK. The majority of the new trucks are 8×8 configuration, but some 6×6 and 4×4 versions have also been procured.

On the old trucks the cargo bed or containers were bolted to the chassis. Not so with the new ones. Scania assembles the new trucks at their plant in Zwolle and these are fitted with an attachment system that can hold either two 10-foot or one 20-foot ISO containers. Other companies, like Marshall, build specialised containers or cargo beds that attach to the truck with these standardised ISO fittings.

For operations in conflict zones, the Dutch MoD bought around 300 armoured cabins. When needed, these heavy cabins can easily replace the standard cabins.