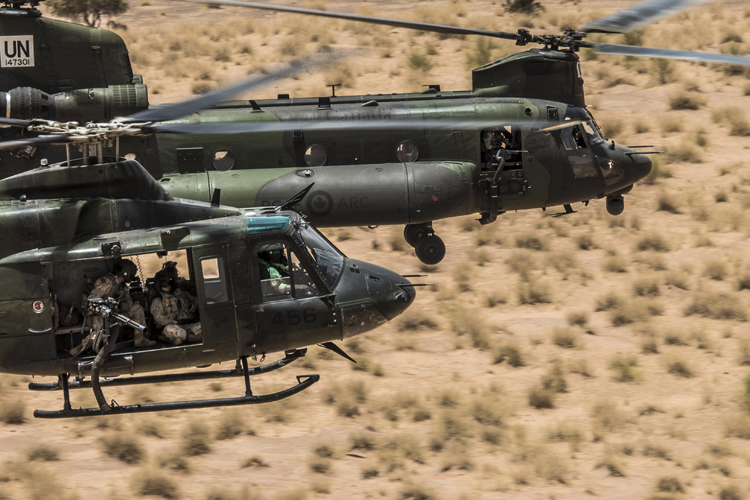 After more than a year of operations in Mali, the Canadian Armed Forces Air Task Force deployed in Gao has completed its peacekeeping mission.

In July 2018, Canada deployed an ATF composed of 250 CAF members and eight helicopters to Gao, northern Mali as part of MINUSMA, which were essential to the conduct of UN operations in remote and vulnerable areas of the country. Since then, the women and men deployed under Operation PRESENCE-Mali conducted 11 aeromedical evacuations and more than 100 transport missions. Upon ceasing transport aviation tasks on July 31, 2019, Canadian helicopters had transported approximately 2,800 passengers and delivered 370,000 pounds of cargo, over more than 4,000 flying hours.

To facilitate a smooth and efficient transition with the incoming Romanian helicopter detachment, the CAF provided four C-17 intra-theatre airlift flights to assist with the deployment of Romanian personnel and equipment to theatre. A small CAF transition team will also be deployed to assist Romania in its preparations to conduct operations. This will minimise disruptions in the availability of critical capabilities to MINUSMA forces and help set up the Romanian rotation for operational success. CAF personnel also met with Canadian civilian police officers, who are deployed with MINUSMA until March 2021, and shared lessons learned in support of their ongoing work in Mali.

Canada’s engagement in Mali is helping to achieve stability and build a brighter future for its people by promoting sustainable development, peace and security. This new phase of Canada’s comprehensive approach to Mali will include continued Canadian diplomatic, humanitarian and development assistance, as well as police and military resources and expertise.

The Honourable Harjit. S. Sajjan, Minister of National Defence: “Operation PRESENCE-Mali reflects our Government’s commitment to do peacekeeping differently. By providing valuable aeromedical and transport capabilities, we have enhanced MINUSMA’s operations. We owe the success of this approach to our dedicated women and men in uniform. Canada will continue its support to the UN while leading the inclusion of women in peace operations.”

The Honourable Chrystia Freeland, PC, MP, Minister of Foreign Affairs: “Canada is committed to UN peacekeeping, which we view as a vital tool to creating a safer and, more peaceful world. Through our support to MINUSMA and other contributions in Mali and the Sahel, we are taking tangible steps to secure lasting peace and stability for the people of Mali.”

Lieutenant-General Mike Rouleau, Commander Canadian Joint Operations Command: “The professionalism of Canadian Armed Forces members was on display throughout the past year in Mali. Successfully executing a mission of this scale in a complex and demanding environment requires a high level of resourcefulness, patience and determination. I am beyond impressed with the work our people have done to support peace operations in Africa.”

Colonel Travis Morehen, Commander Task Force Mali:“I’m extremely proud of our peacekeepers and their achievements in Mali over the past year. Overcoming one of the harshest operational climates in the world, our members were the critical lifeline for both civilians and peacekeepers in need. Through outstanding professionalism and warrior spirit, they have proven themselves as the foundation upon which our military’s reputation for excellence stands.”