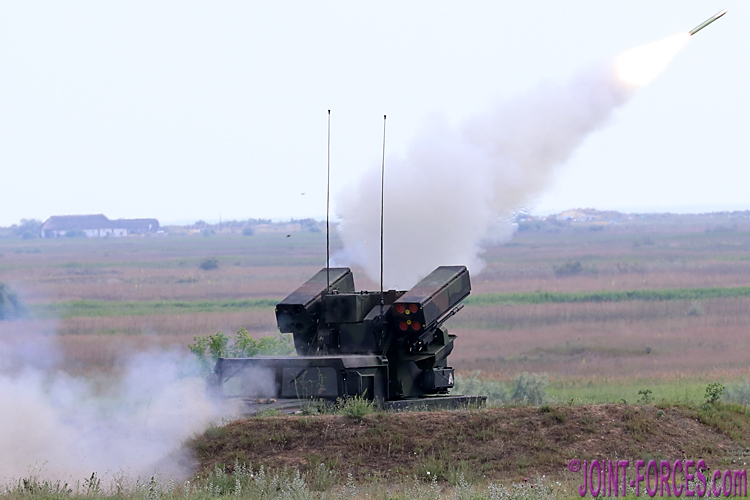 Constituted in the US Regular Army on 16th October 2018 and activated on 28th November, with its headquarters in Ansbach in Germany, the 5th Battalion of the 4th Air Defense Artillery Regiment (5-4ADA) is a subordinate unit of the 10th Army Air and Missile Defense Command and comprises five battery-level units.

The primary SHORAD (Short Range Air Defence) missile used by 5-4ADA, as we have previously seen, is the FIM 92 STINGER which, as a last line of defence, can be shoulder-launched to take out low-flying fixed wing aircraft, helicopters and even UAVs in the 2kg to 20kg range. However to protect moving formations or major static assets such as field headquarters, a mobile solution is fielded which comprises eight STINGER missiles in two launch pods on an AN/TWQ-1 AVENGER air defence system turret mounted on the rear cargo bed of an M1097 higher payload HMMWV or Hum-vee. This mobile LLAD (Low Level Air Defence) system is crewed by two, a driver and a gunner, is highly manoeuvrable and fast to redeploy, and can speedily engage multiple targets with its ‘fire and forget’ missiles. In addition to missile launch tubes, the AVENGER also has a 12.7mm FN heavy machine gun for self-defence, which can not only engage ground targets but can also be used against UAVs.

At the Capu Midia live-fire missile range on Romania’s Black Sea coast last month, during Exercise SABER GUARDIAN 2019, we were able to photograph AVENGER systems from Alpha Battery of 5-4 ADA, both up close when static and from minimum safe distance during a live-fire against a remotely controlled target drone. I am pleased to say that the two-man crew of AVENGER Alpha One Four not only hit the target with their first missile but they totally destroyed it. Speaking to the gunner afterwards, he told J-F that he had also been able to live-fire the AVENGER on Exercise SHABLA 19 in Bulgaria just a couple of weeks before and was feeling really competent with the system.

According to a US Army News Release, published two weeks ago, in the 1990s every US Army division had a SHORAD battalion to protect it but in 2017, with the focus more on counter-insurgency operations rather than on near-peer threats, none of the ten active divisions had one. Colonel Mark A. Holler, commandant of the US Air Defense Artillery School at Fort Sill, has now revealed the plan is to eventually have ten SHORAD battalions once again to defend manoeuvre units and other critical assets within each of the US Army’s divisions and these will be stood up incrementally over time with the next four between now and 2024.

In a future article we plan to look at the longer range PATRIOT missile systems from 5-7ADA, also a subordinate unit of 10th AAMDC, which also deployed to Capu Midia on SABER GUARDIAN 2019.