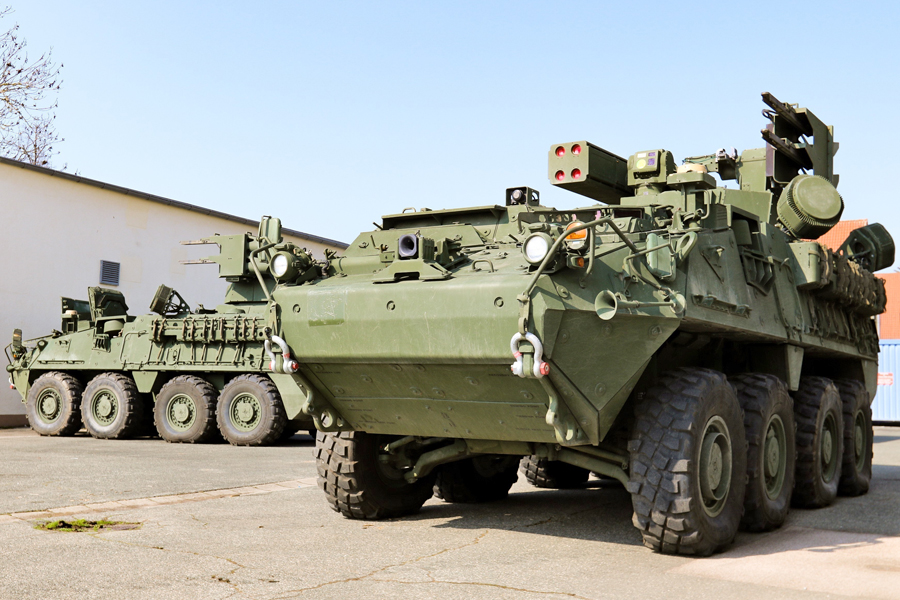 5-4 Air Defense Artillery Regiment deployed to Bavaria in Germany is the first formation to receive the new US M-SHORAD Stryker [US Army: Capt. Jordan Allen]

The first of the new US M-SHORAD Stryker variants has arrived in Germany and will be operated by 5-4 Air Defense Artillery Regiment.

The M-SHORAD integrates existing guns, missiles, rockets and sensors onto a Stryker A1 vehicle. The system is designed to defend manoeuvring forces against unmanned aircraft systems, rotary-wing and residual fixed-wing threats.

Editor’s Musings: It would be a logical step for the UK’s newly announced Light Brigade Combat Teams to be equipped with an M-SHORAD variant of Boxer; based on current MoD procurement track record, however, a cynic might hypothesise that DE&S could commence a feasibility study around 2025 only for the project to subsequently be cancelled around 2035 – by when there would be insufficient troop numbers to operate the systems anyway.

10th AAMDC, 5-4ADA, Featured, M-SHORAD, M-SHORAD Stryker, Stryker A1, Stryker A1 M-SHORAD, US Army, US Army Europe
You may also like