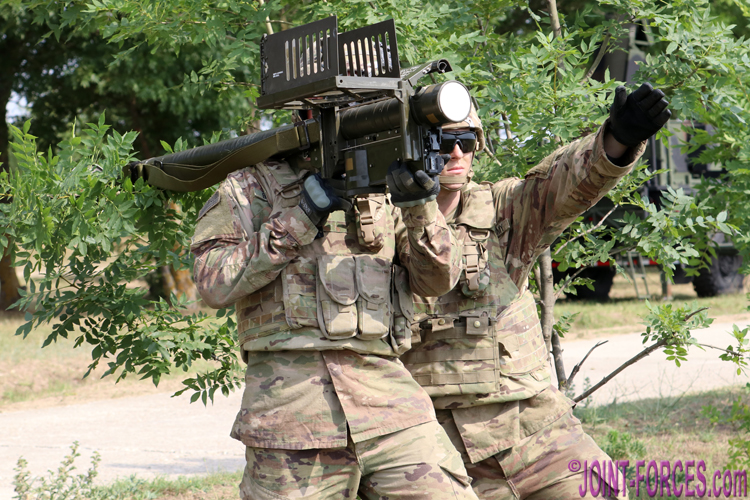 As part of the so-called Peace Dividend, a result of the collapse of the Iron Curtain and subsequent break-up of the Warsaw Pact in 1991, the US Army lost its permanently pre-positioned SHORAD (Short Range Air Defence) units in Europe. However recent Russian expansionism prompted a rethink and on 28th November 2018 the 5th Battalion of 4th Air Defense Artillery Regiment (5-4 ADA) was activated at Ansbach as a subordinate unit of 10th Army Air and Missile Defense Command (10th AAMDC).

Recently, just six months after activation, 5-4 ADA deployed its SHORAD systems on Exercise SABER GUARDIAN, to both Bulgaria and Romania, and J-F was allowed the privilege of photographing live firing of both their FIM 92 Stinger MANPADS (Man-Portable Air Defence System) and their M-1097 AN/TWQ-1 AVENGER mobile system at Capu Midia ranges on Romania’s Black Sea coast. Although we were able to watch a STINGER taking out a target drone at Capu Midia during the SG19 Distinguished Visitors Day, on safety grounds we had to remain some distance away. However the following day we were invited back by our American and Romanian air defence specialist hosts, which allowed us to focus on a STINGER team using the FIELD HANDLING TRAINER (FHT) version.

For those unfamiliar with STINGER, an American system first successfully used (twice) in combat in 1982 by 22 SAS during the Falklands War, it is a passive, shoulder-fired Surface-to-Air Missile (SAM) with a range in excess of 5,000 metres. The 10kg missile, which has a 3kg warhead, is 70mm in diameter with 100mm fins and measures approximately 1.5 metres in length. On launch the missile is propelled from its tube by a small motor and then a two-stage solid fuel rocket motor boosts it to over Mach 2.5 (750m/s). It uses an infrared radiation homing, heat-seeking, ultra violet guidance system to acquire and lock onto the target and has a fold-out IFF (Identification Friend or Foe) antenna on the right side. It is designed to counter fixed wing, rotary and unmanned aircraf flying at low level. Although STINGER can be carried and launched by just one soldier, standard procedure is for a commander / spotter and gunner to work as a team.

According to US Army Field Manual 3-01.11: “The STINGER gunner uses the FHT [seen here] to practice manual skills of weapon handling, operations, sighting and ranging. The FHT can be used to visually track live aircraft or remotely piloted vehicle target system (RPVTS).It allows the gunner to practice mating and removal of the gripstock, and insertion and removal of the battery coolant unit (BCU). The FHT is the same size, weight, and appearance as the STINGER weapon round.”

In my next article from Capu Midia I plan to focus on the AVENGER, which consists of eight STINGER launchers on a one-man turret on the back of a Hum-vee (HMMWV).